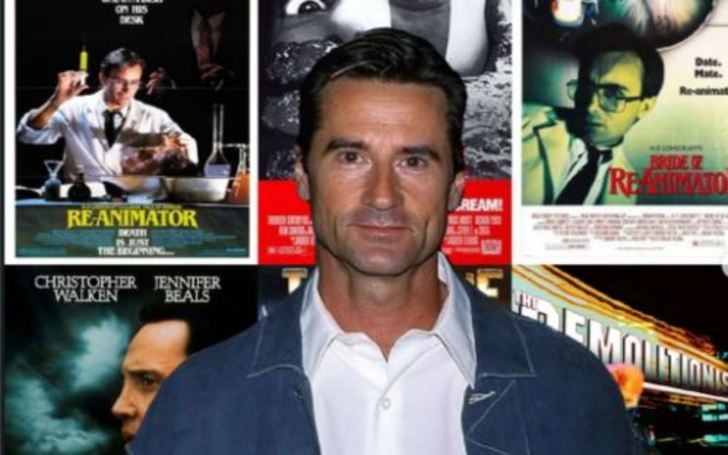 Abbott in the ’80s and the ’90s was well on the verge of becoming the next action/horror star. And he did manage to gain quite the following in the genre.

However, after the culmination of the 1990s, Abbott started to fade away from mainstream cinema, though, he was still doing a few or two movies and occasional TV appearances. Know about his current projects and if he’s said goodbye to the acting forever. Also read about his relationship with his famous ex-wife, Linda Hamilton, and his current partner, Kathleen Quinlan.

Bruce Abbott Was Born In Oregon

Abbott was born on July 28, 1954, in Portland, Oregon. He grew up in Portland and graduated from the city’s David Douglas High School in 1972. It was the same high school that Lindsay Wagner and Sam Elliott attended.

Abbott began his career as a dancer and actor at the Oregon Shakespeare Festival in Ashland, Oregon. He was 19 years old at the time. There he spent three seasons from 1975 to 1978, appearing in productions of A Winter’s Tale, All’s Well That Ends Well, Henry VI Part 2, The Tempest, and The Tragedy of King Richard III.

He studied at the Portland State University, and later the American Conservatory Theater in San Francisco, California

He Found His Success In Horror/Action Genre

In 1980, Linda’s ex-husband relocated from Portland to Hollywood. The actor mentioned there was some strike going out in the biggest film industry instigated by the actors and he didn’t know anyone.

Not long after, he got the role of an antagonist in the movie Tag: The Assassination Game. It was then when he met his future (first) wife Linda Hamilton.

He later acted in Summer Heat (1987), a period drama, with Lori Singer and Kathy Bates. Abbot then also starred in the horror film Bad Dreams (1988) by the director Andrew Fleming. A year later he appeared in the comedy Casual Sex? (1989).

Channing Taylor in the futuristic television film Out of Time (1988) was Abbott’s first lead role.

Bruce Abbott: From The ’90s To Present

In 1991, he appeared in another TV film, Dillinger as Harry Pierpont. Next, from 1992 to 1993, he played the recurring role of Judge Nicholas Marshall in the series Dark Justice.

Abbott’s other TV series appearances include Murder, She Wrote, Family Law, Diagnosis: Murder, among others. The Portland native also had a recurring role in the short-lived series The Net. The series took inspiration from the film of the same title starring Sandra Bullock.

Bruce had an acting credit in the horror sequel The Prophecy II (1996), appearing alongside Christopher Walken and Brittany Murphy.

Abbott says he’s semi-retired from acting. In the meantime, he is also an architect and artist who works in the custom-design industry. To date, he has designed for more than 20 homes.

Who Is His Wife, Kathleen Quinlan?

Abbott’s current wife, Kathleen Quinlan got her start in the 1970s with small roles in big films like American Graffiti and hit TV shows like The Waltons. She is a small-town girl from Mill Valley, California. Interestingly, most of her roles were inspired by her real-life origin.

The present Ms. Abbott received a Golden Globe nomination for her performance as a schizophrenic in 1977’s I Never Promised You a Rose Garden. And in 1996 she got an Oscar nod for her role in Apollo 13.

After the 90’s the actress took fewer roles and focused more on her marriage to actor Bruce Abbott. The couple raised their son Tyler, born on October 17, 1990, and her stepson, Dalton, 31. She says the two boys mean everything to her.

Abbott met Quinlan the same year he divorced his first wife, Linda Hamilton. They encountered each other on the set of the television film, Trapped in Dallas, Texas. They married on April 12, 1994.

Bruce Abbott’s Wife, Quinlan Reveals How They Have Been Together For So Long?

The couple has been together for more than 30 years. In an interview with Closer Weekly, the longtime wife of Abbott said her husband is not self-centered, unlike other actors. She mentioned his generosity, supportiveness, and his great sense of humor.

Quinlan also spoke about the time when their relationship went through a rough patch; the time when her actor husband was working as much.

He Was Married To The Terminator Actress

Abbott married the Terminator actress Linda Hamilton in 1982. They had one child, Dalton Bruce (born October 4, 1989). Dalton can be seen in Terminator 2: Judgment Day as Infant John Connor.

Hamilton and Abbott’s marriage ended around 1989.

Abbott hasn’t had that many screen appearances in recent time. Having said that, it is quite a grueling mystery to decode his financial knowledge. It is also a bit unclear if he’s as rich as his former wife, Linda Hamilton who has an astounding fortune worth over $70million.

It at least could be safe to say Abbott’s net worth is somewhere in the vicinity of his current wife’s wealth of around $6million.

Is Re-Animator Remake Happening? Will Bruce Abbott Reprise His Role

One another thing that surfaces whenever people mention Hamilton’s ex-husband is whether his hit 1985 comedy-horror film, Re-Animator will get a reboot treat.

The film is about a scientist who shows up at a New England college and involves his roommate and his roommate’s girlfriend in some strange experiments. After reanimating feline tissue, they turn to human cadavers. What follows is a frenetic and violent zombie-like commotion and lots of killings. The movie spawned two sequels Bride of Re-Animator and Beyond Re-Animator.

When asked about the possibility of the remake in 2011, Bruce had said,

“I saw originals so I never saw the need to remake it. I kind of appreciate it (the remake). It is just gnarly.”

The last update on this issue was back in September 2016 when Indie Wire teased how the new Re-Animator movie was going to be directed by Serge Levin and star Johnathon Schaech. Likewise, the title was set to be Re-Animator: Evolution.

However, no credible follow-up to that pice has occurred to date.