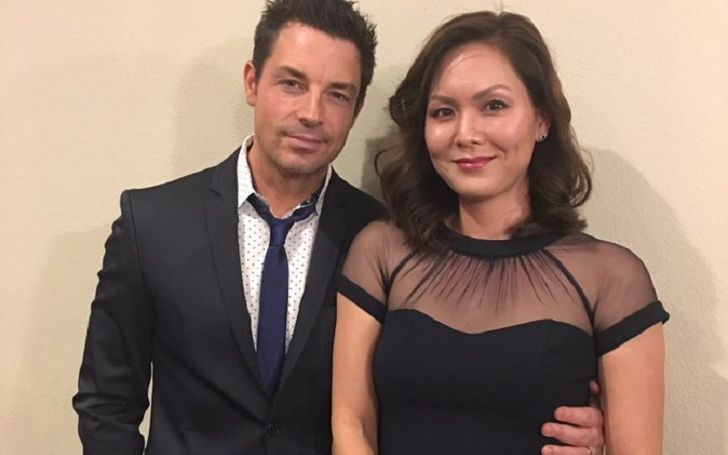 Cami Elliott is the wife of a Candian actor, Brennan Elliott. Her husband who began his acting career in the early 90s grabbed tremendous popularity after his role in the hit Lifetime medical drama series, Strong Medicine.

Talking about their long-lasting marriage, Cami and her husband Brennan have been married for over a decade. The duo is also the proud parents of two kids.

Besides, while Brennan is a regular face in the media, his wife Cami prefers to stay out of the spotlight. So, here we are to find out everything about their hush-hush marriage and more about Cami’s life.

Cami is a celebrity spouse who rose to stardom following her marriage to Brennan. However, the information regarding her profession is yet to be revealed. Sources say Cami spends the majority of her time at home, doing household chores and taking care of their children.

Where is Cami Elliott From? Details on Her Ethnicity and Nationality

Elliot was born and raised in Canada. She is a Canadian as per her nationality and belongs to the Caucasian ethnicity. She has, nonetheless, kept all the details regarding her early life and parents behind closed doors.

In the meantime, her husband Brennan, 46, is also from Canada. Grew up in Calgary, Alberta, Brennan studied at the prestigious Actors Studio at the Juilliard School in New York City.

Elliott was previously diagnosed with stomach cancer. In early Feb 2019, Cami’s actor spouse took to Twitter to announce that his wife is a stomach cancer survivor on the occasion of World Cancer Day. Back then, he wrote,

“Today is #worldcancerday2019 & I cannot stress enough the importance of prevention & early detection. More importantly I am so proud of my wife who beat #stomachcancer last year. She’s a true warrior. #CancerSurvivor.”

Furthermore, the following year, in an interview with NiceGirlsTV, the actor also talked about the battle. When the interviewer asked him “Are there any causes near to your heart that we can promote?” Brennan replied,

“My wife battled cancer and is now cancer-free, thank God, so I’m happy to support anything that has to do with any kind of cancer victims or cancer research, especially involving stomach cancer, which in itself is extremely rare.”

How Long Have They Been Married? Their Long-Lasting Love Story

Cami and her husband Brennan tied the knot back in 2011, in a private wedding ceremony. The two walked down the aisle in front of their family members and colleagues. It’s been around a decade since the two are in a marital relationship and their marriage is still going strong.

In spite of leading a healthy and successful matrimonial, they both have kept their love life out of the media. The duo is yet to make a single red carpet appearance as of yet. Furthermore, neither Cami nor her husband shares family photos on their social media handles.

Cami Elliott is the Proud Mother of Two Kids

Cami shares two children with her husband of over ten-year. The two welcomed their first child, a son a couple of years after their marriage. And a year after their baby boy was born, Elliott gave birth to their daughter.

Just like their marital life, the duo has also kept their children behind the camera. Brennan has shared a few photos of his kids on Twitter. On the occasion of 2018’s Father’s Day, the actor shared a beautiful photo with both of his children. He wrote on an image,

“#Happyfathersday2018 the responsibility of being a father is the most rewarding and difficult role of my lifetime and I am blessed.”

Cami is a Supportive Wife

Elliott has dedicated her whole life to the family and allows her husband to explore the world, without giving him any pressure of family management. Brennan also expressed gratitude towards his wife for keeping things intact at home in an interview with My Devotional Thoughts,

“Without her, I wouldn’t be able to do what I do. She’s the best of the best for sure. I’m so blessed that God gave me somebody that just works for me and I work for her. It’s special. She’s a special, special person.”

“If she wasn’t taking care of the kids and taking care of our whole life, I wouldn’t be able to go off for months at a time and work. It’s a fifty-fifty relationship, and I give her all the kudos in the world.”

Elliott currently resides in Los Angeles along with his family.

What is Cami Elliott’s Net Worth?

The exact amount of her net worth is yet to be revealed. But, talking about her spouse, Brennan has an estimated wealth of $1 million in 2022. He has earned the majority of his fortune from his work in both movies and TV shows.

Her spouse landed his first on-screen role in a music video Tom Cochrane: Life Is a Highway, released in 1991. He made his movie debut with the role of Max in Stone Coats in 1996.

The actor made his biggest breakthrough after his smashing performance in a TV series, Strong Medicine. He portrayed Dr. Nick Biancavilla in the project (2000-05). His other successful projects include UnREAL, Cedar Cove, and Christmas at Grand Valley.