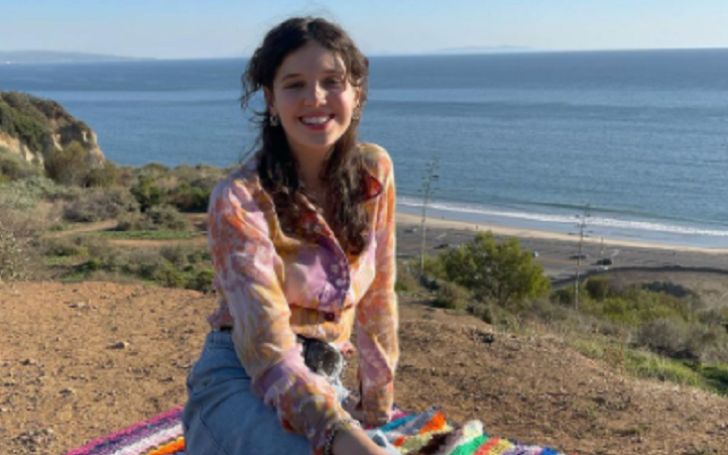 Cylia Chasman is a promising social media star with a decent fan following on Instagram. As of 2023, Chasman has over 390k Instagram followers. She mostly documents her daily life endeavors on her social media profiles.

But back in the day, Chasman attracted huge media attention when she was in a relationship with her boyfriend Jack Dylan Grazer. Although the two initially tried to keep things private, their relationship later in months made a series of headlines, sometimes because of their cheating scandals and sometimes because of Jack’s abusive behaviors toward Cylia. Thus, many of their fans are too curious to know was Jack really a bad boyfriend.

Additionally, we will also find out if Cylia has also moved on with a new partner just like her ex. Here are all the answers to your questions. To know more about Cylia, keep reading!

Who is Cylia Chasman? Her Age and Nationality

Chasman is an Instagram model. She is 17 years old as of 2023 and will celebrate her 18th birthday on October 14 of 2023. Born in 2005, Cylia reportedly spent most part of her upbringing in Los Angeles, California.

Besides, Cylia, whose zodiac sign is Libra belongs to American nationality and has mixed ethnicity.

Who is Cylia Chasman Mother? Her Father is an Executive Producer

Her mom Nadia Farès is a French actress from Marrakech, Morocco. She snagged her first acting role in 1992, playing in the comedy My Wife’s Girlfriends. The actress grabbed attention following her breakout role in the hit French psychological thriller, The Crimson Rivers.

In 2007, Nadia portrayed the character of Jade Agent Kinler in another thriller film War sharing the credit along with some Hollywood stars Jet Li and Jason Statham as well.

Later on, Cylia’s mom was featured in a couple of movies that include Everyone’s Life (2017) and Lucky Day (2019). The latter was directed by Roger Avary.

Prior to her roles on big screens, Chasman has likewise worked on dozens of TV projects. She begged her first television role as Sara in Navarro in 1990. Her other TV credits are The Exile, L’Empire du Tigrem, and Marseille as well.

Besides, Cylia shares a great bond with both of her parents. Back in early June of 2021, Chasman posted a childhood photo with her dad on the occasion of his birthday.

Grew Up Along With Her Sister

Cylia Chasman has a sister named Shana Leelee Chasman, born on 6th October 2002. The Los Angeles, California native is quiet into music and loves to play guitar. Like her sister, Shana is also active on Instagram with thousands of followers.

In addition, while exploring more about Cylia family details, we came to know that her grandfather died back in mid-2020. A month after the old man’s demise, the Instagram star shared a throwback photo along with her grandpa with a lengthy caption.

What is Cylia Chasman Famous For? Her Career Details

Chasman is famous for her activeness on social media platforms, especially on Instagram. Cylia who started posting on the platform in August 2019 has amassed a considerable fan following on the account. As of 2023, Chasman has 390k Instagram followers.

Despite being an emerging social media star, Chasman initially kept her account too secret. But, as of now, the 17-year-old girl frequently shares her photos on her account. Most of her posts are captured from her daily life.

Back in early 2020, Cylia started dating Jack Dylan Grazer. Speculation about their love affair first emerged in January 2020 after Jack posted an image tagging Cylia and Dua Lipa. But, they didn’t confirm their relationship until August of the year. The young actor who played the part of Eddie Kaspbark in It took to Instagram to share an adorable photo with his then-rumored girlfriend Chasman and Jack captioned the picture,

“Manks In The Pulp.”

But it was still secret when the two actually began dating until Cylia uploaded a now-deleted photo along with her beau, celebrating their one-year togetherness in Feb 2021. Her lengthy caption was,

“This boy means the WORLD TO ME!!” she wrote. “I would do anything for you my love. thank you for always being by my side and loving me the way you do. I’ve never experienced this kind of euphoria with anyone and cannot think of anyone else I’d want to live my life with.”

“I wish I could really express the happiness I’ve found spending this time with you, I adore you. happy 1 year.”

Are Jack and Cylia still together?

On one hand, several online tabloids suggest that Cylie and Jack are still dating and on the other hand, the duo seems they aren’t in touch for a few months now. Both of them have removed their posts from their social media handles and have also unfollowed each other. So, it all hints at the possible break-up of the duo.

As of now, we can say with certainty that Jack and Cylia has officially called it quits. As both of them have new partners to boot, it is more than evident that they are no longer together.

When the former flames were in a relationship, several online outlets reported that Cylia Chasman’s boyfriend abused her emotionally and physically. Some of his reported bad behaviors toward Cylia were pushing her to the floor, pulling her hair, punching her, and slamming her into a door.

The claims were first made by an Instagram user @cylia.best.girl, who shared a photo wherein everything was written in a detailed manner about Jack’s abusive behaviour towards his girlfriend, Cylia.

As soon as Jack’s abusive behaviors made headlines in the media, many of Cylia’s fans bashed Jack on social media.

Besides, according to one of Cylia’s friends, Jack cheated on Cylia for a couple of months with an unknown lady.

After reports of Jack’s abuse towards Cylia came to the public, fans all over the social media bashed Cylia. They even called her names like ‘clout chaser.’

Moreover, after multiple vicious attacks towards him, Jack’s lawyer even threatened legal action towards Cylia. In a statement, the lawyer said,

“We will, however, prosecute to the fullest extent of the law any of her adult relatives – – or others with absolutely no personal knowledge of the facts – – who perpetuate vile fabrications about Jack Dylan Grazer. Jack only wishes his former girlfriend peace and happiness.”

Is Cylia Chasman dating someone or single in 2023?

Since her burning romance with Jack slowly faded away, Cylia has remained quite secret when it comes to her love life. However, in 2021, she revealed that she is in a relationship with a new guy.

Her new boyfriend goes by the username @luxva and his name on Instagram is Luca. He is currently studying at University of California, Santa Barbara. Ever since she came public with her new boyfriend, who somehow looks like Jack Dylan, many people have been calling her out for dating a guy who looks exactly like the person whom you said has abused you.

What is Cylia Chasman Net Worth?

Chasman, 15, has an estimated net worth of $400,000 as of 2023. She mostly makes money from her social media career. Besides, as of now, Cylia resides in Pacific Palisades, Los Angeles with her parents. Her father bought the 6,185 square feet property that features 6 bedrooms and 6 bathrooms back in 2020 for nearly $15 million.

Who Is Jenny Popach? Everything About The TikTok Star