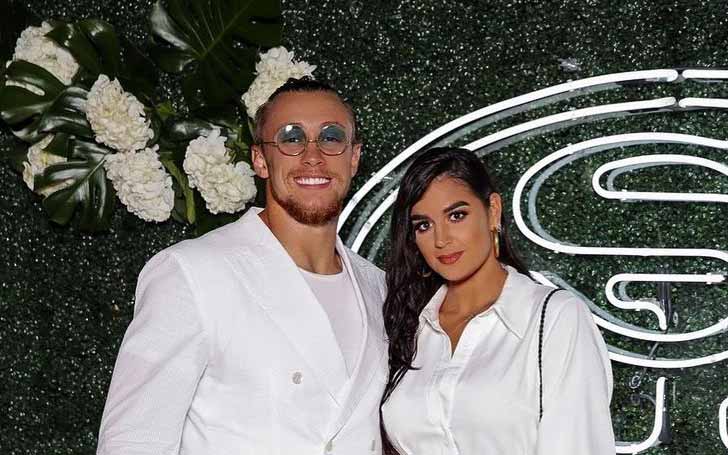 George Kittle is not a new name among the NFL fans. The 28-year-old Wisconsin native plays as a tight end for the San Francisco 49ers in the NFL. If you have just started following the 6 ft. 4 inches tall athlete, then you might not be familiar with his personal life.

Well, George has been happily married to his wife as of 2022. But who is George Kittle Wife? How long has he been married?

We are covering everything about George’s personal life, his wife, his conjugal life with his spouse, and more. Stick with us till the end to know everything about the footballer’s love life.

George Kittle Wife – When Did the NFL Star Meet the Love of His Life?

The San Francisco 49ers tight end, Kittle has been married to Claire Kittle for a couple of years. George and Claire tied the knot on April 10, 2019. Claire wore a wide-legged jumpsuit and a matching blazer while the groom was seen in checkered grey pants and a white dress shirt.

Talking more about their wedding, the Kittle-duo exchanged vows in an intimate ceremony attended by their close friends and family members only. As a matter of fact, George’s father, Bruce officiated their wedding. Claire writes on her letteysetgo.com that she and her current husband wanted a small ceremony because “that’s the sacred part of it all.”

She added that the couple had no problem throwing a “rager of a bash” for their friends and relatives, but they really wanted a small wedding. Saying that she also mentioned the reception was coming a little later.

Talking about the location for their wedding, the wife of the well-known athlete writes,

“We initially chose the location to be the rooftop of M.C Ginsebergs jewelry store in dt Iowa City. But, due to nasty rain cold weather, we had the ceremony inside on the main floor, their jewelry showroom.”

“This place is special to us because Jane and all the ladies at Ginsebergs have been family friends for years.”

Besides, Claire had also mentioned that she and her husband would throw a big party in Italy in June 2020, however, it didn’t go as per their plan as the world was hit by the COVID-19 pandemic at the time.

So, to talk about George and Claire’s first meeting, it happened at the Univesity of Iowa. Talking explicitly about his first encounter with his now-wife, the footballer said he was 18 and a freshman at college when he first saw him.

Georgie reminisced he was outside of a dormitory with his roommate while Claire walked in from a moped parking and he was astonished by her look. Then, George asked his roommate who she was and he said that her name was Claire and one of his friends had told him “she was a total b***h.”

The footballer went on saying that he spent the next eight months in a friendzone before he finally tricked her to like him.

George and Claire dated for a couple of years before the former finally got down to his knee. On August 10, 2018, the 49ers star popped the question to his then-girlfriend with a cute diamond ring at the Twin Lakes State Beach Santa Cruz, California.

George planned his engagement very well that he had convinced his now-wife, Claire for a photoshoot meant for the team’s brochure and website.

Then George got down to his knee with a ring in his hand while Claire had turned the other side for the photo. As Claire turned toward George, she couldn’t believe her eyes. She literally couldn’t get any words for a moment and she ultimately said “Yes!” and the pair became engaged.

Later, on 28th August, the pair released a video featuring the engagement and the setup George did before that. Have a look.

Meanwhile, Claire also shared a number of photos from their engagement on her Instagram on 11th August. “Can I get a HELL YES!!! 💃🏻💍💎,” Claire wrote at the beginning of her caption. Here is the post.

Claire was so on cloud nine that she couldn’t stop herself from posting the pictures from their engagement. The 27-year-old celebrity spouse kept on sharing different photos on her Instagram for days.

Who is George Kittle’s Wife Claire Kittle? Details about Her Early Life and Parents

Claire was born Claire Colette Till on May 24, 1994, in Dubuque, Iowa. Claire was born to her parents Marty and Shelley Till. She revealed her middle name on her website where Claire also revealed that her husband George gave her the nickname “Lettey,” short for Colette.

Besides, Claire has a younger brother, Riley Martin who is three years younger than her. Claire occasionally shares her younger brother’s photos on her socials. Meanwhile, back on October 17, 2015, Claire shared an old picture of her and her brother on the occasion of his 18th birthday. Here is the post.

Talking about her education, Claire graduated high school from Wahlert High School and then joined the University of Iowa. Kittle was a part of the lady Hawkeyes basketball team at the university. Besides, there she also became a part of Play 60, a program meant to inspire young people to attain fitness.

After Claire graduated with a bachelor’s degree in health and human psychology, she started working as a physical therapy assistant at the University of Iowa Hospitals and Clinics Rehabilitation Therapies. After that, she started her own business, Claire Till Fitness, LLC in Iowa.

She Loves Blogging and Fitness

Being the wife of one of the most well-known current footballers, Claire doesn’t need to work to sustain her life. However, she is an independent as well as an enthusiastic woman. So, she certainly won’t stay idle forever. Claire isn’t involved in any big profession, however, she seems to be interested in blogging and fitness.

Initially, Claire was well into fitness and she also became a part of a program to inspire young people to attain fitness. But, as of now, she is more focused on blogging. On her website, Claire blogs and documents travel photos. In her blogs, she provides travel tips, fashion advice, among others.

Does Claire Kittle Have Any Children with Her Husband George?

The straightforward answer to this question would be a no. As we mentioned before, Claire and George have been married for a couple of years now and they have been together for over eight years. However, the duo is still taking their time in starting a family.

There is no doubt that they would love to have kids together, but for now, George is at the peak of his career and he doesn’t seem to be interested in shifting his focus from his football career. In the meantime, neither Claire nor her husband has talked openly about their intentions for children. So, for now, we can only say they are enjoying their conjugal life to the fullest. We wish them years and years of a joyful life.

Where do The Husband-and-Wife Live?

Well, George Kittle is associated with the San Francisco 49ers until the 2025 season which was confirmed after he signed a $75 million contract on August 13, 2020. So, for most of the time in this period, George and Claire will be living in California. But, the duo has a wonderful house in Nashville, Tennessee where they spent their free time together.

The pair debuted their Nashville property in August 2021 after a complete renovation and redecoration. In an interview with Niners Nation, George revealed that his wife, Claire was greatly involved in the renovation of their house.

Back then, George revealed the husband-and-wife were going to stay in their house for a while. “It’s a place we’re going to be for a while, and she was very excited about that.“

Who Is Katherine Hough? Everything About Julianne Hough’s Sister

Is Jhene Aiko Dating Boyfriend Big Sean in 2021? What Is The Truth About Their Wedding?