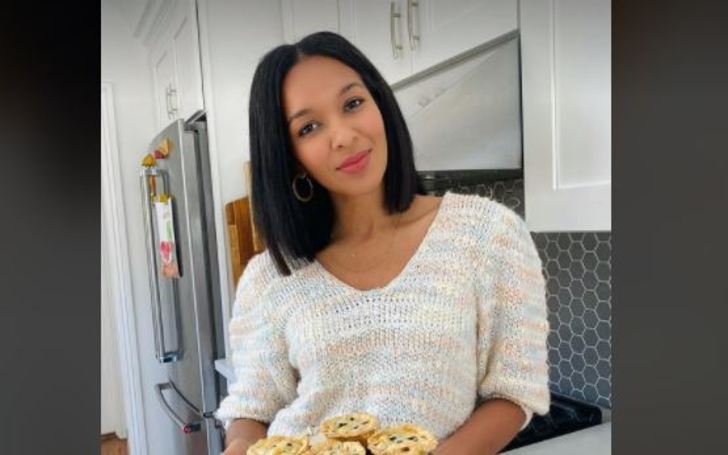 Lizzy Mathis or Elizabeth Mathis is an actress, model, and food blogger. She is known for films and series such as Unstoppable, Enchanted, Tron: Legacy, CSI: Miami, and Law & Order: Criminal Intent.

Mathis is also well known as the longtime best friend of the Fantastic Four actress, Jessica Alba. Together, the actresses can be seen hanging out and promoting their business on several social media platforms.

Lizzy hasn’t been that active in Hollywood since 2017. She now has built unique stardom in quite a different genre; an entrepreneur and a culinary personality. Know why she shifted from acting to business and food. Also, read how she came to become the BFF of Alba. Additionally, delve fully into the personal life of Lizzy Mathis; her husband, children, & more.

Lizzy Mathis Was Raised By A Single Mother

Mathis was born on Aug 1, 1983 (age 38 years) in Detroit, Michigan. She is a native of Southfield. Mathis once said she grew in a family where each one had a tight bond with the others. She admits she is a Midwest kid.

Mathis likes green grass and playing outside. Lizzy revealed with Goop that she was raised by a single mother. Her heritage belongs to The Zulu people of southern Africa. She has two older brothers. Lizz though hasn’t revealed much about her father.

Lizzy has also revealed that her upbringing was very down-home. Growing up, she briefly participated in beauty pageants, winning Miss Teen Michigan in 1998. She, however, did not place in the follow-up national pageant.

Mathis studied communications and business at Northwestern University. She also went to college in Chicago. During her time at the university, she also pursued acting and explored her talent off-campus. With the fascination to make a career in performing arts, Lizzy later moved to New York.

She Has Appeared In Notable Films

Lizzy had her debut as an actress in the TV series, What About Joan in 2001. In the show, she played the character of Cheerleader no 2. She then appeared in Law and Order: Criminal Intent as Naomi in an episode titled Death Roe. Lizz then went on to have cameo appearances in three series, namely, Rescue Me, Love Monkey, and Six Degrees.

Elizabeth’s first big-screen role came in the 2007 film I Think I Love My Wife though she had a minor role as a fantasy woman no.2. That year she also had credit in the Disney romantic comedy film, Enchanted. In 2008, she made two appearances in the TV series, House of Payne before having one more cameo in the series, CSI: Miami.

She got more recognition playing Nicole in Chris Pine and Denzel Washington starred Unstoppable. Thereafter she went on to star in movies like Tron Legacy, 100, 000 Zombie Heads, and others. She has also appeared in a music video, Butch Walker and the Black Widows: Synthesizers (2012).

Additionally, she has had an impressive portfolio with Wilhelmina models. One of her former agencies is Heffner Management.

In recent years the five-foot-nine-inches tall actress, Lizzy Mathis has transitioned into a celebrity food blogger. She owns her own site and venture, Cool Mom. On her website, the mother of three shares style hacks, healthy recipes, DIY solutions, wellness wins, and numerous tips on adulting.

She says her love of cooking comes from her grandmother and mom. She revealed she grew up with them who expressed their love through the food they prepared and nourished their children’s bodies with. The Unstoppable actress said there were so many traditions in their kitchen. She though says it was only after becoming a mother that she truly began to realize the joy she felt from creating dishes.

Lizz says she learned culinary skills through watching amazing chefs. They weren’t considered chefs or culinary experts, they were older family members who knew what spices mixed well with what, exactly how much flour was needed for this or that, and weren’t afraid to mix flavors or make mistakes.

How She Met Her Husband Isa Rahman?

Lizz is married to her husband, Isa Rahman, a native of Birmingham, Alabama. They have been together for more than 15 years. Together, they have three children; two girls and a son.

They met when they were both struggling models in New York.

“So I was doing this job (one of the modeling gigs) and he walked in. The producer o the set was Isa’s roommate,”

remembered the Unstoppable actress. Lizz added her future husband had just come out of town. She though admitted she doesn’t remember if they said hi to each other.

On the other hand, the father of Elizabeth’s children revealed he had seen her picture a week before he actually met her. Nonetheless, nothing happened during their first meeting, the couple agreed. A week later, when Lizzy was hanging out with her roommate and decided to go out with her; at a birthday party.

Rahman Talked About Marriage To Lizzy On Their First Conversation

At the party, the mompreneur remembered Isa walking right past her. But before her would-be husband did that, Lizz said to him, “Don’t I Know You From Somewhere.” To which Isa responded, “Yeah! Maybe.” The actor turned culinary blogger revealed he answered with rather less enthusiasm.

Lizzy then added how Rahman’s eyes were on her throughout the night. They eventually talked. Talking about their second meeting, Isa said her voice to him felt like something he wanted to hear for the rest of his life. The couple says they vibed really well from thereon.

At the end of the conversation, the pair agreed — Rahman saying to Elizabeth, “I know it sounds really crazy but I think you are gonna be my wife.” They then dated for four years and in the fifth, they married. They apparently exchanged vows in June 2009.

Lizz says she has always felt comfortable with her husband; from their very first conversation.

She Is Best Friend With Actress Jessica Alba

Lizzy Mathis has been best friend with actress Jessica Alba for a long time. The friendship apparently started when the two decided to create an ASMR video together.

They often choreographed dance routines, and they have often managed to stay almost perfectly in sync. The actresses, through each of their YouTube channels and other such podiums, also teach their fans about most-of-at-home clothing styles. The duo can be spotted making guest appearances on each other’s platforms, every now and again.

What Is Lizzy Mathis’ Net Worth

Much like her multimillionaire actress friend, Mathis is also a businesswoman and quite a successful one to speak of. Her lifestyle parenting blog the Cool Mom has gained quite the following in recent years. And while she may not be as well off as her actress/businesswoman friend, Jessica Alba (net worth >$340million), she is still assumed to be in the millionaire club.

As a longtime friends, Lizzie and Jessica, and the Fantastic Four actress’ team are business partners in The Eczema Collection. The company claims it is the first created specifically for sensitive skin that does not contain parabens, silicones, petrolatum, mineral oil, or steroids.

Who Is Emma Myers Boyfriend? Her Dating History, & More Relationships

Who Is Julius Dein? Untold Details On His Current Girlfriend, And His Past Affairs