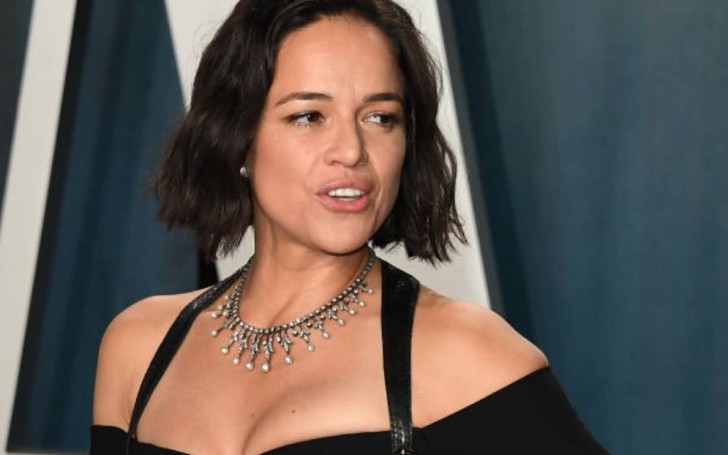 Michelle Rodriguez is an American actress who is famous for her role in the Fast & Furious franchise. She played her role of Letty Ortiz exceptionally well and it wouldn’t be an understatement to say she made her role immortal.

Apart from her professional life, she has been relatively private about her personal life. Many times fans often ask about Michelle Rodriguez’s husband but she has never given any answer.

Who is Michelle Rodriguez husband? Is she married?

Ever since she first made her debut in the entertainment industry, she has been making a lot of head turns. Not just through her beauty but from her acting talent as well.

When she was cast in the first movie of the Fast & Furious franchise, Michelle became an overnight sensation. Since then she has featured in many other movies and left a lasting impression amongst her fan. Nowadays, peeps have been asking about her life behind the cameras, especially her dating life.

Before getting any further, allow us to tell you that as of now, there is no Michelle Rodriguez husband. Yes, you read it right, she is not even married to anyone so any questions related to her spouse are irrelevant.

What is the reason behind Michelle not marrying till now?

In 2015, during a conversation with the actress, Milla Jovovich for Interview Magazine, Michelle opened up about her personal life. Of all the interesting anecdotes we found out about her one thing stood out the most. She revealed that staying with one single person for more than six months is quite a monumental task for her.

When asked if she will ever welcome a baby into this world, she said,

“I’m a lone wolf. I run by myself on most things. I’ve got lots of really great friends, but the thought of being in a long-lasting relationship? Psh, I couldn’t last more than six months with somebody.”

From the above statement alone we can easily assume that for Michelle it’s quite taxing to stay in a single relationship. Well, it is safe to say, we might not see Michelle tie the knot with someone anytime soon.

She once turned down a Muslim wedding

One time the actress was involved in a relationship wherein she was quite close to getting married. Of all her relationships, there was one where her partner even proposed to her.

Michelle revealed in an interview that she was once proposed to by her Muslim boyfriend. Unfortunately, she turned down the proposal due to his strict conditions. As for why she said no, well she said,

“He was like: ‘I want you to marry me and I want you to cover your body and show nothing but your eyes.’ The attitude was that my body was for his pleasure alone and he was very demanding. I finally said: ‘Sorry, no one rules me. I rule myself.'”

Although she isn’t quite into having a long-term relationship, Michelle has maintained she wants unconditional love. The San Antonio native divulged in the same interview that she wants to have a baby someday.

In the same interview, she stated, “You might get lucky enough to find that unconditional love in a friend or a lover, but it’s very rare. So if I ever have a kid, it’d be so that I could look in those eyes and know that this child is a piece of me and will love me the same way I love, but I think that’s selfish of me.”

Michelle is quite strict about her Private life

Throughout her decades of career, one thing that we all know about Michelle is her secretive nature. The otherwise bubbly and livid actress is quite vigilant when it comes to her life behind closed doors.

The majority of celebrities these days are quite open about their life. But Michelle is not like those celebrities. Since the beginning of her career, Michelle has rarely ever talked about her life, especially her dating life.

She says, “I’ve always been and will always be very private about my personal life. If anything ever goes public, it is by default, because I happened to be in a place where I was being watched.”

Well, she isn’t kidding about keeping her life private. To this day, she has rarely talked about her dating life. In her own words, she says, “I don’t talk about what I do with my vagina, and they’re (the media) all intrigued. I’ve never walked the carpet with anyone, so they wonder: What does she do with her vagina?”

Michelle Rodriguez Sexuality: She is a bisexual

It was back in 2013 when Michelle came out as a bisexual. Rumors about her sexuality had been going about but she never addressed them publically. However, she ended it all with an interview with Entertainment Weekly.

She said in the interview that she had gone both ways when it comes to hooking up and dating. For her, both men and women are intriguing so limiting her to one gender isn’t a viable option.

At first, various tabloids claimed she was a lesbian after she was linked with her BloodRayne co-star Kristianna Loken. A couple of years later in a red carpet event, when asked if she was a lesbian, in a Michelle Rodriguez way, she said, ‘Michi likes sausage.’

Over the course of her career in showbiz, she has been involved in numerous affairs. The brunette was linked with big names from the industry. Let’s find out the names of those people who have had the opportunity of going out with Michelle.

In the beginning, she was linked with her Fast & Furious co-star, Vin Diesel. News of their romance came out since the day they began shooting for the movie. In the movie as well, they play the role of a couple. Their romance fizzled out sometime in the early 2000s, though they have maintained great friendship to this day.

Some times later, she dated her S.W.A.T co-star Colin Farrell from 2002 to 2003. The same year in which she broke up Colin with she hooked up with French actor, Olivier Martinez.

In 2005, she had a brief fling with artist Lenny Kravitz. Around the time when she featured in the film Bloodrayne, she dated yet another co-star but this time it was a she. Michelle dated Kristanna Loken, her first major lesbian relationship.

Subsequently, a couple of years later, she famously went out with English actress Cara Delevingne. The pair had an incredibly close relationship and there were even talks of marriage between them. Nevertheless, their relationship soon ended.

Rodriguez was last linked with Zac Effron. They dated for a couple of months.