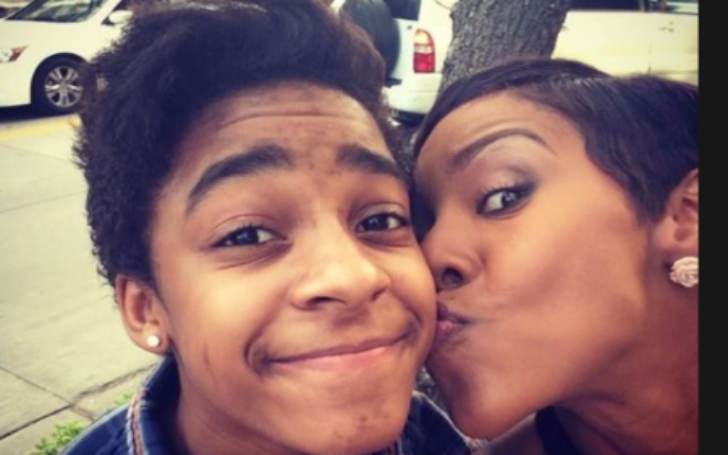 Jaya Kelly aka Jaah Kelly is known as the middle child of rapper R. Kelly and Andrea Lee. He rose to fame because of his celebrity parents. His father is an American singer and songwriter.

But did you know Jaya was a female at the time of his birth? He later came out as a Trans male back in 2014 and changed his name to Jaah after realizing his sexuality. So what was his family’s reaction when he came out? Did his family accept his decision?

Apart from that, how is his relationship with his father, who was recently convicted of sex abuse? Well, in this article you will find answers to all your queries. Scroll down below to find out more about his sexuality, his love life, and many more!

Born on 2000, Jaah is currently 22 years old. He was born to his star parents R. Kelly and his mother Andrea Lee. He belongs to the African-American ethnicity and holds American nationality.

Jaya was raised by his parents along with his two siblings Joann Kelly and Robert Jr. Kelly.

Talking further about his family, he was born into a well-to-do family. His father R.Kelly who is infamous for different legal issues was popular back then as a Singer and Songwriter. He has also won some prestigious awards like Grammy three times. At some point of time, he was one of the world’s best-selling music artists in the 90s.

Likewise, his mother Andrea Kelly aka Drea Lee is a former back dancer. She worked as a backup dancer for her ex-husband’s show before her marriage. Later, she appeared in many TV shows and movies.

Jaya Came Out as Transgender at the Age of 14

Jaya aka Jaah was very young when he came to realize that he didn’t like doing things like normal girls. He was born as a female biologically but when he was around 6 or 7 years old, he realized he was attracted to girls. Jaah once replied to his follower in his Ask.FM profile, that he never liked to dress as a woman or have female organs from a young age.

He finally decided to have surgery and transform himself into the person he wanted to be. He told DailyMail,

“I believe I am a boy and want surgery, and the medication to help me (be) who I was supposed to be”

Jaah coming out as a Trans Male was a shock to the world. However, Jaya finally started carrying out himself after his surgery.

What was his family’s reaction to him doing surgery?

Although American society is conservative about the LGBTQ+ community, Jaah did not have to face many hurdles while he was opening up about his sexuality. His family and friends were very supportive of his decision. Moreover, Jaah always had his mother’s back and she was always a proud Mumma. He said,

‘My mom was like, “Baby, you know I love you if you were bi, gay, lesbian, you name it and I would still love you so much”,

He disclosed that his mother was proud of him. Jaya then thanked his mom and said,

“Thank you mom for accepting the fact that I’m a transgender”.’

Moreover, he is very happy that all his friends and siblings accept him as a male. His sister calls him handsome and her little brother which makes him feel great.

Jaya’s father was Abusive Towards His Mother

Jaya’s mother Drea Kelly revealed in an interview with ABC News that Kelly, who always lurks behind a popular face, had more of a sinister persona. Jaah’s mother was a choreographer, dancer, and happy mother of R. Kelly’s kids in front of the media. But, Drea claimed that she was emotionally, physically, and mentally abused off-camera. She has been hiding her bruise from the world for all those years.

According to Drea, R. Kelly was a very aggressive and controlling type of person and used to beat Drea. He used to tie her hands and legs with rope and abuse her. Drea went through all of that and still maintained her normal life in front of the camera. She also disclosed that she was too scared to open up about her situation earlier as R. Kelly was very ‘powerful’ at that time.

The duo who had met each other almost 24 years ago in their home town Chicago seemed to be a perfect couple. But underneath the sugarcoated relationship, Drea was going through misery to an extent that she almost committed suicide. Finally, in 2006 she filed for divorce.

Furthermore, Drea now works as an advocate and motivational speaker for domestic violence and helps other victims to come out and fight for themselves.

Jonah’s father is infamous for his multiple sex abuse allegations and civil lawsuits. He went through many accusations in the 1990s. In 1996, his first civil suit was filed for having a sexual relationship with a 15-year-old high school kid while he was 24 years old. After that, many other cases were filed for accusations like illegal marriage (1994), Exposure of child abuse material and indictment(2002), and Allegations of child molestation (2009).

After all the accusations, his fans and the music industry boycotted him. His music was removed from Apple’s featured music. Many other celebrities stood with the “Boycott R.Kelly” and “Mute R.Kelly” movements. Despite being boycotted from the music industry, his legal issues didn’t end there.

After that US District Judge ordered to keep Robert Kelly in the custody at Metropolitan Detention Center while waiting for the verdict. He was firstly sentenced to 10 years in prison. Later, On June 29, 2022, he was sentenced to 30 years of life in prison. He is still imprisoned in the state prison.

How is Jaya Kelly’s Relationship with His Parents?

As we all know, Jaah rose to prominence because of his famous parents. However, he is not close to his father like his mother. Although Robert was not a good husband, he was not a bad father. He tried his best to maintain a good relationship with his children. But, when his kids came to know about their father’s criminal activities, their relationship crumble.

Talking about his mother Drea, she seems to be very close to her kids. She raised her children and they currently live together. In several interviews, she has mentioned that her kids are her world and they mean everything to her. That is to say, Jaya is very close to his mother.

Jaya and Her Siblings were Bullied Because of Their Father

Furthermore, when they were asked about what they felt about their father, Jaah and his siblings did not respond well to that question.

What is Jaya Kelly Currently Doing?

Jaah is currently living with his mother and is focused on his musical career. Although he is not close to his father, Jaah somehow followed in his father’s footsteps as he likes to sing and rap. He has opened up about his career goal and he wants to be a music artist.

Jaah is very private about his personal life and has not revealed anything about his love interest yet. He is also not much active on his social media platforms.

He mentioned earlier that he is interested in a girl. But, there are no rumors about him dating any girl. The 22-year-old star kid seems to be career focused and has no girlfriend yet.

What is Jaya Kelly’s Net Worth?

Jaya Kelly was born into a celebrity family which is why he has quite a lavish life. There are no exact details regarding Jaya’s net worth as he just started his career. However, he does own a few portions of his parent’s property.

Talking about his parent’s net worth, his mother Drea Kelly’s net worth is around $5 million. Her major source of income is working as a choreographer and dancer. She makes good money as a motivational speaker as well and that is how she has been able to look after her three kids. Likewise, Jaya’s father’s net worth was around $10 million.