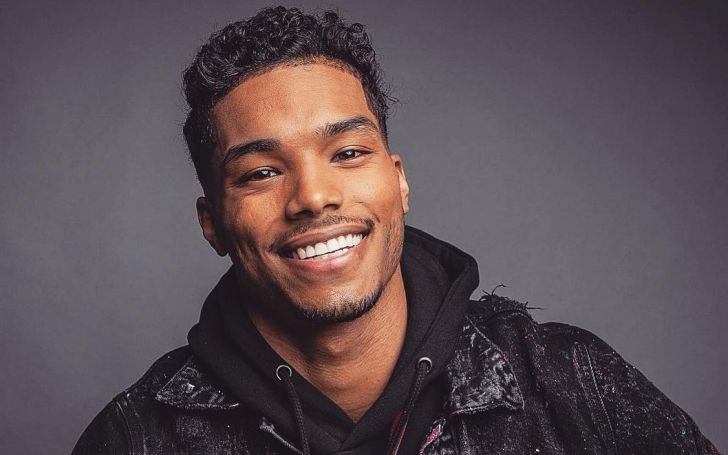 Fans always want to know about the relationship status of their favorite star, and Rome Flynn is no exception. Most recently, he was dating Camia Marie, but it looks like the couple has broken-up. Many tabloids have claimed Rome was married to Camia, however it is far from the truth.

Let’s find out if the father of one daughter is seeing someone else after breaking-up with Camia Marie. Also, take a look at all the answers to your burning questions including who is Rome Flynn’ wife? who is his girlfriend now?

Who is Rome Flynn wife?

First of all, the handsome actor is not even married to begin with. So the question about having a secret spouse is out of context. The rumors regarding his marital status started after Rome’s link-up with his now ex-girlfriend, Camia.

When the former flames were still a couple, they used to share a lot of photos with his daughter, Kimiko. And whenever there’s a child in the picture, one often raises questions about the pair’s marriage.

Nevertheless, Rome and Marie never tied the knot. In addition, the actor shares the child with his former girlfriend. And no, he didn’t marry his baby momma as well.

Well, it looks like there is no Rome Flynn girlfriend in 2020. Since his break-up with Camia, he has been off the dating radar.

Scrolling through his Instagram feed, we found no evidence whatsoever regarding a potential partner. Safe to say, he is relishing his singlehood.

But in early 2020, there was a certain someone with whom Rome’s fan continuously shipped him with. She is none other than his co-star in How To Get Away With Murder, Aja Naomi King.

In many of their pictures together, fans bombarded the comment section with remarks such as ‘My Fav couples’ or ‘Is that your boyfriend.’

Despite all the noise and shipping by their fans, both the professional actors never commented on the matter.

Regardless, Flynn is relishing his over the top career, and we sure hope he continues to do so in the near future as well.

It is pretty evident by now that Rome and Camia Marie parted ways almost two years ago. There was no official confirmation regarding their break-up, but Camia’s new relationship speaks for itself.

Yes, the hot and sizzling model is dating a new guy. It seems the pair started dating around a year ago.

Meanwhile, Rome and Camia started dating back in 2015 when they first met outside her house. Rome summed up their first meeting in a poetic way to CBS. He stated,

“Camia Marie,
We met outside of her house.
We kissed,
Our teeth touched.
The rest is history.”

They went out for more than three-years before calling it quits due to undisclosed reason. Aside from the fact, Camia has not deleted any pictures with Rome’s daughter, Kimiko Flynn, from her Instagram account, meaning she still maintains a cordial relationship with the Flynns.

The Instagram star and model has good bonding with Kimiko. Rome shares Kimiko with his ex-girlfriend, Molly Noriko.

Since getting into a relationship with Rome, she used to take care of Kimiko whenever she came to spend time with her dad. Their relationship was so adorable that it eventually started the rumor about Camia being the mother of Rome’s daughter Kimiko. Nevertheless, it’s not true.

Even so, in hindsight, Camia was happy becoming a mother-like figure to Kimiko. Camia will cherish every moment they spent together.

In case you missed it, Rome shares a daughter with his ex-girlfriend, Molly Noriko Hurley. The couple dated several years ago, and from that relationship, Molly gave birth to Kimiko on December 12th, 2014.

Rome and Molly decided to go their separate ways after the birth of their daughter but they decided to raise her together. She occasionally spent time with her dad in LA and then with her mom in Michigan.

Regardless of their differences, the former flames make sure they don’t let it get in the way of parenting. After all, no one wants to raise a child in the absence of either one of their parent.

Is Rome’s Ex Molly Dating Anyone?

Recently, Molly shared a picture of an unknown guy along with her daughter Kimiko. She has not mentioned in the caption about the nature of her relationship with this guy.

We cannot say for sure if he is her new boyfriend or just a friend. Be that as it may, Kimiko does look happy with him.

Its no surprise the handsome hunk has many fans especially girls who are literally all ready to become his girlfriend or wife.

And after Rome’s recent comment, looks like its not just girls that are asking him out, but even their moms are urging him to go out with their daughters. In an interview with Page Six, the actor hilariously stated,

“Parents reach out to me like, ‘This is my daughter. She just graduated from college. These are her grades. This was her minor.”

The surprising part of the set-up here is that the kids don’t even know their mommas are asking Rome to date them.

Ideal Type of Girlfriend or Wife for Rome Flynn

After his break-up with Camia, Rome vividly talked about his ideal type of woman in an interview with xoNecole. When the interviewer asked about how he judges the woman he is interested in, Rome stated,

“If I’m talking to a woman, it depends on what I’m looking for. If I’m just looking to “hang out” with somebody, it’s really not that difficult, because I feel like I always hold the cards.”

He also mentioned that as of this moment, he focuses more on his professional life and as opposed to jumping into the dating scene.

Furthermore, finding his ideal woman is quite hard for him as not many people can match his energy. And he is on a lookout for an energetic girl.

Rome also reveals that upon becoming a father, his outlook towards his ideal woman changed. Now for sure, he knows what to look for when he’s out there.

Who Is Camia Marie? Is She Married? Relationship With Rome Flynn