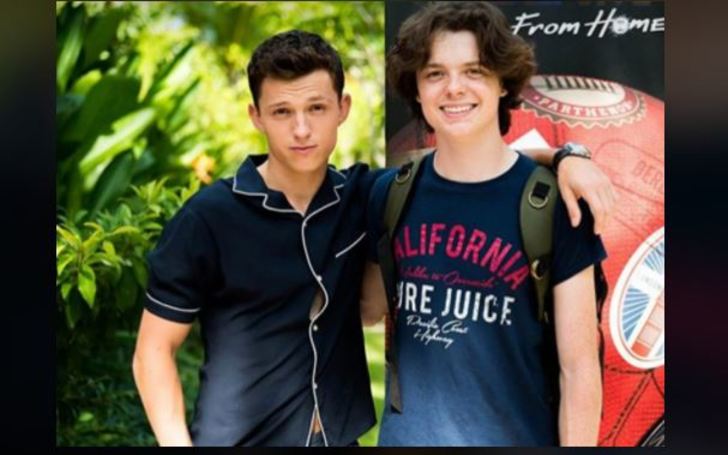 Sam Holland, born Sam Anthony Holland,  is the brother of the Spiderman actor, Tom Holland. He is three years younger than the Avengers star. The Holland brothers, to all appearances, are quite the personification of the siblings-goal.

The pack of four boys together carry out all sorts of fun activities as well as some business. Tom seems to be the big brother who loves to hang out with his siblings all the time. And their social media activities couldn’t confirm it more.

Among the member of such a group is Sam Holland who although not as famous as his brother Tom looks quite an interesting guy. Know all about his life growing up with three brothers, his parents, his relationships, and much more.

Sam was born on 14 February 1999 in Kingston, Kingston Upon Thames, United Kingdom. Tom’s brother has a bit of Irish ancestry. He studied at The BRIT School for Performing Arts & Technology. Sam lives in his birth city, Kingston.

Sam’s father, Dominic is an author, comedian, and broadcaster. He is also the winner of the 1993 Perrier Best Newcomer Award in Edinburgh. Dominic’s 2000 BBC Radio 4 series, The Small World of Dominic Holland won a Comic Heritage Award.

Sam Holland Siblings Are In The Movie Career

All of Sam’s three brothers are in the entertainment business, including Sam himself.

His twin brother, Harry Holland has credits in more than 15 films, short or feature-length. Harry’s first-ever role was in the 2012 film, The Impossible where he played one of the Kids In The Tent alongside his other brother Tom and Sam. Harry has also had a fleeting appearance in Tom’s 2020 film, Cherry (2020). He is also set to have another cameo in No Way Home.

Sam’s younger brother, Paddy has also appeared in the 2015 short film Tweet. Additionally, he played the character of a tough kid in the 2018 film Holmes and Watson starring Will Ferrell and John C. Riley.

In 2020, the youngest child of Dominic Holland starred in another short movie titled, Roses For Lily. Since 2020, Paddy has been portraying the role of Montgomery (Monty) Cuttermill in Apple TV’s Invasion.

Sam Holland Runs A Charity Organization With His Brothers

Sam, along with his three brothers, runs a charity organization, The Brothers Trust. His parents, Nikki and Dom launched the organization in 2017.

In addition, they also have their own merchandising e-store, The Brothers Trading. The Holland brothers contribute the profit to shine a light on charities that struggle to be heard.

Furthermore, they also have their own line of hoodies, called the Brother Trust hoodies. It is aimed at helping people with children suffering from cancer.

Sam Holland Had A Role In A Disaster Movie

Sam made his acting debut alongside his brother, Tom, and Harry in the 2012 disaster drama film, The Impossible. In the movie, he played the kid in the tent. He then played Sam in a short movie titled Tweet (2015) directed by his brothers, Harry and Tom. In 2020, he once again starred in a short film called Roses for Lily. The limited-length romantic movie had Sam’s twin brother, Harry as its director.

He Is Also A Chef

While Sam, himself hasn’t confirmed if he is professionally in the culinary career, it though looks he has quite an affinity for being in the kitchen.

Apparently, it appears Tom’s brother has just stepped his shoes in the business.
He first shared the picture of him donning an apron in July 2021. Not long after, there were a couple of more snaps of him where he is flaunting his chef’s mantle. Whatever the case, Sam looks pretty fond of the cooking chores.

In June 2019, when Sam’s brother, Tom stopped by Late Night with Seth Meyers to promote the Spider-Man: Far from Home, he opened up about a funny moment on a family vacation.

After saying that he’s willing to serve as wingman to his younger brothers, the Spiderman actor told host Meyers about the time they were in Hawaii and his brother Sam wanted to meet girls.

Tom then described their plan as to get someone to recognize him and thereby giving a chance to introduce his brother Sam to all their friends.

So the brothers went swimming and the Avengers actor said how one girl approached them. Recalling the incident Tom said,

“She breezes right past me and she goes over to Sam and goes ‘Oh, my God, are you Timothée Chalamet? And he was like ‘Yes, yes I am.’”

While the eldest Holland didn’t reveal how far the deception went, he did say it probably didn’t go too far given his brother’s lack of fluency in French.

Tom Holland Wants One Of His Brothers To Be In Every Film. Is It Sam?

Over the years Tom has gained massive success appearing in blockbuster franchises. And he is not one to keep all that glory to himself. In March 2021, during an interview, Dominic and Nicola’s first son revealed how he has a cheeky and ambitious plan to create a fun running thread throughout every film he makes.

While talking to Jimmy Fallon, Tom admitted he wants his other brother Harry reprising his role as The Shaky Kid from the film Cherry in his every other movie. Sam’s older brother also confirmed Harry having a minor cameo in his upcoming movie, Spider-Man: No Way Home.

Although Tom gave away almost every detail about his brother’s appearance in the new Spiderman movie, he didn’t mention if he had the same plan for the rest of his other brothers, Sam and Paddy.

Tom Gifted Piano To Sam Holland On His 21st Birthday

During an interview with Jimmy Kimmel in Feb 2020, Tom revealed he bought his brothers, Sam and Harry a piano and Rolex. The actor said the gifts were for their 21st birthday.
The Homecoming star explained he wanted to give his two brothers something “memorable” on their big day.
He added he bought Sam a piano as he loves playing one, and a Rolex for Harry.

However, the now 23-year-old acknowledged splitting the costs of the expensive presents with his parents. Tom said buying the gifts was a real family endeavor.

Sam recently confirmed that he has a girlfriend. And she goes by the name, Clarke Stewart. Tom’s younger brother announced the relationship on July 16, 2021, sharing a picture of himself alongside, Stewart. Additionally, the caption of the imaging said, My Other Half (with a classic red heart emoji).

A month later in August, Stewart also introduced Sam Holland as her special one to her Ig followers.

While it is unclear when Sam and Clarke started dating, each of their Instagrams seemingly tells the relationship is a bit new.

The pair last appeared together in early October 2021.

Although Sam hasn’t talked about his past relationship, he was reportedly dating a girl named Elysia Dayman before Stewart. Dayman is an Instagram influencer and a fitness blogger.

Sam and Elysia, when together, shared a few or two pictures of themselves tagging along by each other’s sides. The imaging since has been deleted. It is yet to be disclosed when exactly they stopped dating each other. Daisy, as for now, is seeming with her new boyfriend, Tom Cooper.