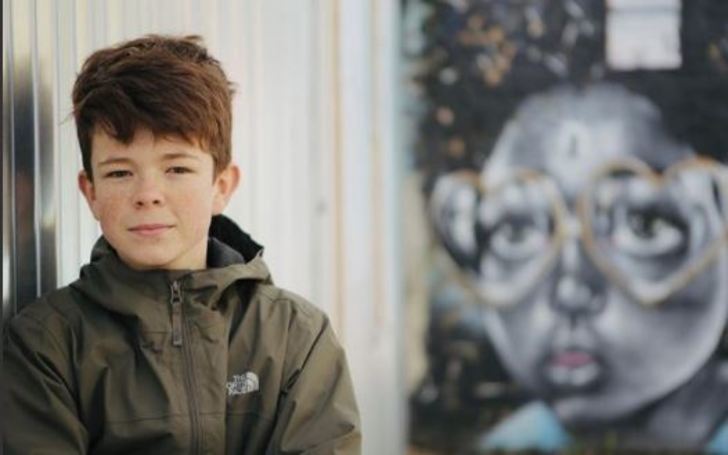 Paddy Holland (Patrick Holland) is the brother of the Spiderman actor, Tom Holland. He has been gaining considerable recognition starring in Apple TV’s Invasion an extraterrestrial sci-fi horror series.

Tom’s younger brothers Sam and Harry, who are twins, and Paddy are always around to support him. And if their Instagram is anything to go by, the four spend as much time together as they can.

Down here, know what is the story behind Paddy’s role in Invasion. En route, also read all about his early life, his relationship with his superstar brother, Tom. Also have an insight into his personal life, his upcoming projects, and quite more.

Paddy Holland Was Born In London

Paddy was born on December 6, 2004, in London, United Kingdom. He is the youngest of the Holland brothers. Paddy’s paternal grandmother was from Tipperary, Ireland.

It is not known what school did Patrick attend but he has been presumed to be the former student of Donhead, a Roman Catholic preparatory school in Wimbledon in South West London. He is also speculated to have gone to Wimbledon College, a voluntary aided Jesuit Roman Catholic comprehensive school.

Paddy’s father, Dominic Holland is an author, comedian, and broadcaster. The senior Holland is also the recipient of the 1993 Perrier Best Newcomer Award in Edinburgh. His BBC Radio 4 series, The Small World of Dominic Holland won a Comic Heritage Award.

Paddy’s parents met at Leeds University. His mother is a photographer, Nicola Frost.

All Of Paddy Siblings Are In The Movie Career

As mentioned, Patrick has three brothers (all older than him). Two of his elder siblings are twins, Sam and Harry while Tom is the eldest. All of Paddy’s brothers are in the show business one way or the other.

Harry has credits in more than 15 film projects, short or feature-length. His first ever role was in the 2012 film, The Impossible where he played Kid In The Tent. Harry has also had a cameo in Tom’s Cherry (2020) – a feat which he is about to repeat in No Way Home.

Paddy’s other brother, Sam Holland also had a minor role in The Impossible. His two other films credits include two short movies, Tweet (2015) and Roses For Lily (2020).

Paddy Holland Has Appeared In A Handful Of Movies

Holland made his screen debut with the 2015 short film Tweet. The comedy feature had his brothers Harry and Tom as co-directors. Two years later, Paddy played the character of a tough kid in the 2018 film Holmes and Watson starring Will Ferrell and John C. Riley.

In 2020, Tom’s brother yet again starred in a short movie titled, Roses For Lily. This too was directed by his brother, Harry Holland. Since 2020, Paddy has been portraying the role of Montgomery (Monty) Cuttermill in Apple TV’s Invasion – starring alongside, Golshifteh Farahani and Sam Neil.

Holland Runs A Charity Organization With His Brothers

Along with his elder brothers, Paddy runs a charity organization, The Brothers Trust. It was set up in 2017 by the Holland brothers’ parents, Nikki and Dom.

Paddy and his brothers through their organization try to shine a light on charities that struggle to be heard. The funds raised go to the people in need.

The Holland brothers also have their own line of hoodies, called the Brother Trust hoodies. It is for families with children suffering from cancer.

Is Paddy Going To Be In Spider-Man: No Way Home?

In early 2021, reports claimed thatPaddy’s older brother, Sam would have a bit of a cameo role in Spider-Man: No Way Home. Sam had a similar cameo in Tom’s love-tragedy film, Cherry.

What’s more some people are wondering if Paddy is also going to have screen time in the much-awaited MCU movies. However, there has been no solid confirmation to that end. Fans can only hope that Paddy’s cameo will be one of many surprises that No Way Home brings about.

Back in Feb 2020, the Cherry actor and Paddy’s eldest brother, Tom Holland talked about the moments when he used to embarrass his brothers.

While doing so Tom revealed how his little brother used to hate it when he picked him every day from school.

“I used to pick up my brother, Paddy from school, every now and then and he used to hate it. It was really fun for me and mortifying for Paddy,”

said the Avengers star. The actor though didn’t explain why Patrick didn’t like his brother picking him up.

There are a handful of more stories where Tom is being an annoying brother to his younger siblings. And all of such footage has made it through the actor’s socials occasionally.

When asked by Joe if Tom wins against brothers in video games, the British actor answered, “never.” The Greater London-born actor admitted he had never been able to beat any of them. He also remembered the time when Paddy taught him to play fortnight but couldn’t beat him which made him “angry.”

Does Paddy Have A Girlfriend?

Paddy has been on Instagram and other such communities since 2017. He, however, has never for once mentioned his love affairs & girlfriends. This could be the teenager is still early to go and publicize his romantic detail if there is any. Or he just isn’t in that spectrum yet. Whatever the case, it’s completely up to Tom’s brother for the people to know whether he has a girlfriend or not.

As for now, the Holland brothers’ shenanigans are all that fans can see from Patrick’s social handles.

Is Paddy Holland As Rich As His Brother, Tom?

Considering the reach of Tom in Hollywood against his junior brother, it might not be something to wonder about. It should go without saying, Paddy is very much nowhere as affluent as his big brother, Tom who has an astounding net worth of over $18million which he most likely amassed from more than a dozen of appearances in major titles.