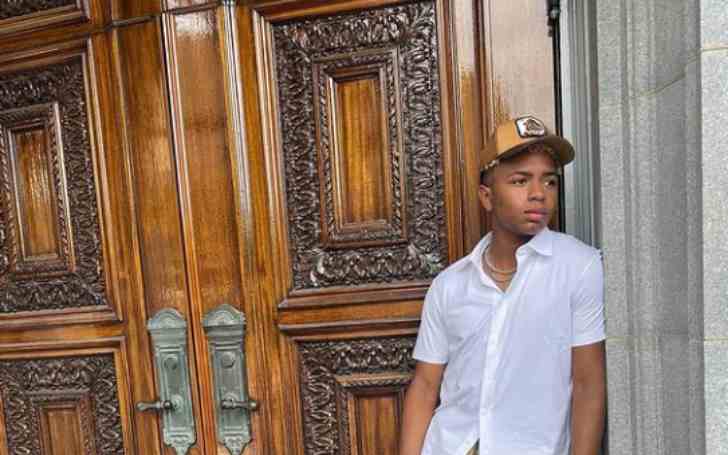 Slater Vance is a popular celebrity kid who rose to fame as the son of the American actress Angela Bassett. His mom has worked in several popular movies like Black Panther, Mission: Impossible-Fallout, Gunpowder Milkshake, and many more. What’s more, she was also nominated for Academy and Emmy awards.

Apart from being a star kid, not much is known about Slater. We know many of you are curious to know about his dating life, what is he doing currently? Is he going to follow in his parent’s footsteps and his acting career?

Well in this article, there are answers to all your queries. Keep scrolling to know more about Slater including his personal life, love life, net worth, and many more!

Slater Has A Twin Sister

Slater was born on January 27th, 2006, in Los Angeles, the United States to parents Angela Bassett and Courtney B. Vance. However, the journey of their parenthood was not smooth like a fairytale. Angela revealed in an Interview with The Oprah Winfrey Show in 2007 that they had a tough pregnancy. She disclosed that she didn’t want to have a child at the beginning as she was focused on her career.

Later, when she was ready to have a baby they were not lucky enough to have one. The celebrity couple tried to conceive for seven years but all they could receive was a disappointment. Following that, the couple finally decided to adopt a child but one of their family friends suggested they have their kids through surrogacy.

Finally, the couple decided to have their kids via surrogacy and ended up welcoming their twin babies Slater Vance and Bronwyn Vance on January 27, 2006. Both of them were delivered pre-maturely and were born 5 weeks before their due date.

As aforementioned, Slater was born to a well-to-do celebrity family. His mother Angela Bassett is an American actress who was born on August 16, 1958, and has been nominated for and won many prestigious awards like Golden Globe Awards and Screen Actor Guild Award for Best Actress. Some of her major projects include Music of the Heat, London has Fallen, and notably Black Panther as Queen Ramonda.

Likewise, her father Courtney Bernard Vance is also an American actor who has been awarded Primetime Emmy Award for outstanding lead actor in a limited or Anthology series or Movie, a Critics Choice Award, and many more. His major projects include Lovecraft Country, Genius, The Affair, and many others.

Well, it is safe to say, thanks to his parent, Slater got media attention from a very young age.

How did his Parents Meet?

The Hollywood power couple Angela Bassett and her husband Courtney B. Vance had a very boring first date according to Angela. Slater’s mother revealed in the interview with Oprah that they first met in the 1980s at the Yale School of Drama. However, both of them had no feelings toward each other at that time. She further revealed that Courtney had a girlfriend who was one of her co-stars in their play.

A few years later, Angela moved to L. Where she eventually landed her Oscar-nominated role in What’s Love Got To Do With It, while Courtney’s career took him to Broadways. Although they had a boring first date, the couple somehow ended up going on another date which was a golf date.

The couple then realized that both of them had begun to have some feelings toward each other. As Courtney was a very shy guy he didn’t go for an extravagant proposal. He disclosed that he approached her with a paper where he had written ” I like you, You like me, check yes or no” That is when Angela felt the spark between them and decided to take their relationship to the next level.

Slater’s parents decided to tie the knot on October 12, 1997. They had a beautiful wedding ceremony in front of their friends and family. Like a regular bride and groom, Angela wore a beautiful white gown with a long white veil and Courtney wore a black suit while Angela was walking down the aisle.

We all really love their journey. from an unnoticed presence to a boring date to an amazing married life. The couple has gone through lots of ups and downs together and is still holding on to each other. The couple still shares a strong bond to the date.

Slater shares a very close bond with his mother Angela. Although Slater does not post much about his family on his social media, he has appeared a few times with his mother. He seems to be enjoying the lavish life granted by his parents.

Is Slater Vance in a relationship?

Slater is currently 16 years old and he is more focused on his career. Looking at his social profile, he does not seem to be dating anyone as of now. Meanwhile, he is sometimes seen hanging out with some of his friends.

Although Slater’s parents are in the film line, he does not seem interested in the same field. He does have easy access to the media world but he is more into a musical career. His mother once disclosed that Slater is more into music and rap.

Moreover, he is working on his music career and has recently released his album named Holehearted. Furthermore, his twin sister also helps him with his music. He keeps posting about his music on his social profiles.

The famous star kid, Slater seems to be quite active on social platforms. He is mostly active on his Instagram handle under the name @slater.vance with 3.6k followers. Moreover, he is also available on other social platforms like Snapchat and TikTok.

Slater has recently stepped onto his career and has been making a little income through his music. According to some tabloids his estimated net worth is around $100,000 as of 2022.

Talking about his parent’s net worth, both Angela Bassett and Courtney B. Vance have been able to amass a good amount of fortune to date. Slater’s parent’s combined net worth is around $25 million. Their major source of income is acting.