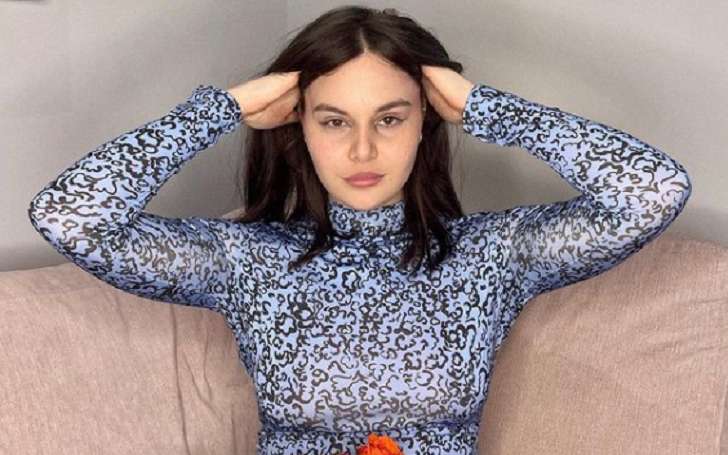 Holly Anna Ramsay is the twin daughter of Gordon Ramsay, a renowned chef and a popular TV personality. Her mother Tana Ramsay is a TV broadcaster and an author. Like their professional life, both of her parents are enjoying a blissful marital relationship for years.

Besides, Holly, a Ravensbourne University graduate has been paving her way in modeling and has already signed with EST Models. Also, Gordon’s daughter is a social media influencer with thousands of followers.

Besides, in late May 2021, the budding model opened up about her battle with post-traumatic stress disorder (PTSD) after suffering sexual assault at the age of 18. Here are numerous interesting facts about Gordon Ramsay’s daughter Holly including her reported appearance in Love Island, a celebration of sobriety, and more. Let’s take a look!

How old is Gordon Ramsays’ daughter Holly? Details on Her Parents

Born and raised in London, the United Kingdom, Holly Anna Ramsay is aged 22 as of 2022. She was born on 31st December 1999, to Gordon Ramsay and Tana Ramsay. Her mother is a TV broadcaster and cookbook author. Besides, her parents, who tied the knot back in the mid-1990s are still together, leading a wonderful married life ever since.

As for her nationality, the star kid has an American nationality and belongs to the Caucasian ethnicity.

Holly Has a Twin Brother

Her twin brother’s name is Jack Scott Ramsay. The two celebrated their 21st birthday on 31st Dec 2020. Celebrating their birthday, Holly posted a throwback photo of themselves on Insta with the caption,

“21. Happy birthday to us, thank you for being the best and always by my side.”

Besides, her twin brother Jack attended the University of Exeter, a Public University in Exeter. Shortly after his graduation, Holly’s twin brother went on to join United Kingdom’s Royal Marines.

Her Three Other Siblings

All of them are quite close to each other. Their social media handles are full of their adorable photos. Her younger sister, Megan posted a childhood picture with her three siblings on Instagram.

One of Holly’s Brothers Died

Back in June 2016, Holly’s mother Tana had miscarried a baby boy, Rocky when the TV broadcaster was five months pregnant. Gordon took to Facebook to announce the sad news. He wrote,

In April 2017, in the honor of her late brother, Ramsay’s sista Megan ran the London Marathon to raise funds for the charity Great Ormond Street. She wrote on her JustGiving Page,

Likewise, Holly took part in the London Marathon with her twin brother in memory of their late brother Rocky in April 2018.

Like their sista, they completed the marathon to collect money for Great Ormond Street Hospital

As for Holly Anna Ramsay’s education, Gordon Ramsay’s daughter went to Ibstock Place School. She later went to MPW London. Furthermore, soon after her graduation, Gordon’s daughter enrolled at Ravensbourne University London to study fashion design, “with a dream of getting her work on the runway.” In August 2018, Holly’s chef father congratulated the twins after their A-level success via Instagram with the caption,

“Well done Jack and Holly! ‘Two more Ramsays off to university. Exeter (and) Ravensbourne. I’m so proud, amazing results, ABB, ABC. Also well done to all the other students on a very tough year! Dinner’s on me!.”

Her TV Appearance; Ramsay Was Once Nominated for a Children’s BAFTA

Being the daughter of one of the veteran TV personalities, Holly started making an appearance on TV from an early age. Her first appearance was on her father’s show, The F Word, on Channel 4 back in 2005. She later featured on a few episodes of her dad’s cooking show, Hell’s Kitchen.

In October 2015, Holly went on to appear on the BBC cooking show Matilda and the Ramsay Bunch, which her sister Matilda hosts. She popped up on the show along with her three siblings. Later on, they all were nominated for the Children’s BAFTA Award.

Along with her famed father, Ramsay also attended many big events, including the BAFTA and GQ Awards events, the Julien Macdonald show at the London Men’s Fashion Week, and the 2012 Teen Choice Awards event. The latter also helped her to garner a massive fan following on her social media handles. Moreover, Holly once appeared as a guest on American Idol judged by renowned artist, Jennifer Lopez.

Has Gordon Ramsay’s daughter Holly Ever Been on Love Island?

The rumors about Holly entering the reality TV show Love Island first broke in May 2021. At the time, several sources reported Ramsay’s daughter was all set to join the cast members of the show and ready to appear with its luxury holidays and red carpets.

However, the star kid didn’t make any appearances in the show in 2021. But, again in mid-2022, Holly’s dad Gordon teased on her Instagram post saying that his daughter was joining Love Island.

What does Holly Anna Ramsay do for a living? Her Modeling Career

Anna Ramsay is a social media influencer who has 315k followers on Instagram as of 2022. Besides, Holly, a promising model is signed to EST Models. She has also worked for a number of clothes and accessories such as the Daniel Wellington watch and more.

Back in April 2017, in an interview with TV Magazine, Gordon told that his twin daughter once worked for the clothing store Brandy Melville. Furthermore, the model was also modeled for the lingerie retail company Boux Avenue in Jun 2021. She also was the latest face of the brand.

Outside of her work, Holly enjoys working out in her home gym and glam nights out at classic London bars.

Her Battle With PTSD After Sexual Assault

Holly was previously diagnosed with post-traumatic stress disorder (PTSD) after being sexually assaulted at the young age of eighteen. The now 21-year-old opened up about her sexual assault on her 21 & Over podcast. She also revealed that it took around a year to tell the horrific attack to her family members.

The incident also led Ramsay to spend three months at London’s Nightingale Hospital for mental health. She there was diagnosed with PTSD, anxiety, and depression.

The budding model said to Independent,

“I went to university, studied fashion design, and I loved it. But by the second half of the first year, I was being affected by my PTSD and I had no idea that this was happening.”

Holly further said that PTSD was the “result of two sexual assaults” at the age of 18. She added,

“I didn’t tell anyone about it until a year afterwards. I just buried it in a box in the back of my mind.”

At the time, Gordon’s daughter stated She was in therapy. She said,

“I have been in therapy up to three times a week. I now have these diagnoses that I carry around with me,”

It is now really progressive for her.

Anna Ramsay Celebrated One Year of Sobriety In 2021

In December 2022, Gordon’s daughter Holly took to Instagram to celebrate her one-year anniversary of sobriety. She disclosed in her post her struggle with alcohol addiction and her journey to becoming sober. She wrote,

“Today marks one year without alcohol. That is not something I thought I would ever say at the age of 21. However, by 21 (nearly 22) I never thought I would have been through half of what I have.”

The star kid cited the main reason behind her decision to quit the drink as her health issue,

“I chose to take a break from alcohol because it wasn’t improving my mental health — which for me, comes first.”

Who is Holly Anna Ramsay’s Boyfriend?

Holly has remained quite secretive about her love life. Although the star kid has shared many photos along with several of her male buddies, Ramsay has yet to confirm whether anyone among them is her boyfriend or not.

As of now, Holly is likewise not dating anyone publicly.

Is a Close Friend With Brooklyn Beckham

Holly, who belongs to a prominent Ramsay family has a long list of famous friends. She is a close pal of Brooklyn Beckham, a model, and a photographer. Because of their utter closeness, there were also rumors about them dating in the past, but they denied the speculations saying they were only close friends.

What is Holly Anna Ramsay Worth?

Her net worth is $1 million. She has earned such a good amount of fortune from her various works. On the other hand, her chef father Gordon’s estimated net worth is $220 million. His main source of income is his career as a chef and restaurateur.

Holly splits her time between her California and London home.