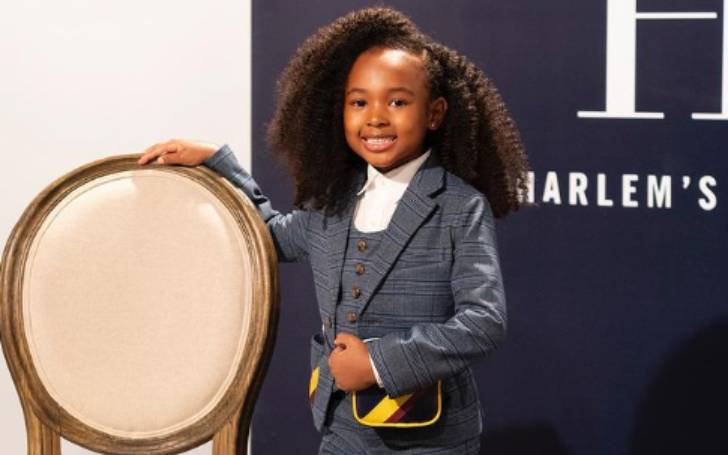 Zhuri  James is a celebrity child who came to the limelight as the daughter of LeBron James and his wife Savannah James. Her father is one of the best American professional basketball players in the NBA and is also known as “King James.”

As the youngest member of the James family, Zhuri is pampered by all the members. Despite her young age, she has won million of hearts with her cute but dashing personality and of course her dance moves. While her parents in her early days didn’t post most pictures of her maintaining her privacy, she seems all over their Instagram feed these days. In fact, she appeared on her dad’s Insta with her catwalk that went viral.

The little one never stops surprising the public, be it with her activities or her expressions like in her brother Bronny’s prom. Like her dad, Zhuri also plays basketball sometimes but she is yet to find out if she is totally into it. So, dive into the piece below and discover everything about LeBron James’ daughter, Zhuri James. Also, know about her age, birthplace, school, height, and net worth. Stay with us till the end!

What Age Is Zhuri James?

The celebrity child was born Zhuri Nova James in 2014, making her 8 years old in 2022. Born under the birth sign Libra, she blows candles on 22 October. Furthermore, Zhuri was born and brought up in the same birthplace as her father LeBron James in Ohio, US.

She belongs to mixed ethnicity as both her parents are from multiracial African-American ethnic backgrounds. Likewise, the little girl holds American nationality.

Talking about the kid’s name, it is of Swahili origin which has a meaning to it. According to this, Zhuri means “beautiful” and Nova means “new.” Looks like the parents have definitely given a thought before giving her name.

What Is Her Height?

Zhuri Nova James is a little girl who stands at a height of 3 feet and 9 inches tall.

Unlike most celebrity kids, Zhuri is not homeschooled. The eight years old attends Sierra Canyon School in Chatsworth, Los Angeles for her primary education. Her brothers were also enrolled in the same school.

How Many Siblings Does Zhuri James Have?

Zhuri is the youngest of the James family with two brothers above her. However, both her siblings were already born before her parent’s marriage. She was the only one to be born after the wedding.

The celebrity child’s eldest brother Bronny James was born on October 6, 2004. Like his father, he is a great basketball player. In fact, he is popular as an American high school basketball player who attended Sierra Canyon School with his brother and sister.

Similarly, Zhuri’s younger brother is Bryce Maximus James born on June 14, 2007. Looks like both her siblings are following in her dad’s footsteps as Bryce is also keenly interested in basketball. He also plays for Strive for greatness in his high school.

The oldest bro of 8 years old, Bronny, is at the end of high school. Their momma posted some pictures from his prom on May 19, 2022. In the first and second pictures, Savannah was fixing her son’s bowtie and a shirt whereas, in the last picture, her son appeared with his date and Zhuri in the front with an expression.

Though it was Bronny’s prom, the little girl stole the show. People were commenting on her expression saying; Zhuri with the “I’m about to become a meme “face” while some were saying “She ain’t playing about her brother.”

Her Parents: Zhuri Is The Daughter Of NBA Player LeBron James

LeBron James is a very popular name in the sports world; Zhuri is the only baby girl of him with his wife Savannah. He is an American professional basketball player for NBA who is also known as “King James.” James has won many accolades including four NBA championships, four NBA MVP awards, four NBA Finals MVP awards, three All-Star MVP awards, and two Olympic gold medals. In addition, he was also named as NBA’s most valuable player four times and is the youngest in NBA history to reach 30,000 career points.

Similarly, her mother Savannah James is a businesswoman and a philanthropist. She has launched a furniture line with her husband with American Signature called Home Court by LeBron James. Furthermore, she is looking after her family and managing the schedule of her three kids.

Yes, LeBron and Savannah have been together ever since they knew each other. The couple first met around 2002 when the now-wife was only 16 years old. At that time they were still in high school and James was a year senior studying in a rival school.

It was the basketball player who first approached her by asking for her phone number with one of her friends. But instead of giving her number, the mother of three then took his number.

Eventually, when she was just sitting around one day, she felt like calling him as she thought the guy was interested in her. The couple then started hanging out together with their friends and went on a solo date a few weeks later. And the rest is the history!

LeBron following their years of relationship proposed to her on January 1, 2012, in Miami Beach. Subsequently, the couple tied the knots on September 14, 2013. By that time, the then-girlfriend and boyfriend were already parents to their two sons.

Despite being only seven years young, the kid makes sure to put her shoes on to all the trends. Either because of the celebrity parents or other reasons, Zhuri has got that confidence and a diva personality.

Having said that, her father recently uploaded her reel on Instagram which got thousands of likes and lots of great responses. Zhuri was wearing a zebra print jumpsuit with a charcoal acid wash denim jacket over it. In addition, she wore rectangle sunglasses and heeled sandals to complete her look.

The celeb kid took a walk in her backyard like a runway flaunting her outwear in style. LeBron along with the video posted some pictures as well. He captioned with, “I’m officially DONE!!!!! It’s OVER for me!! Someone please call 911 *Wyclef voice 🗣🗣🗣🗣🗣🗣🗣🗣….. 😍😍😍😍😍😍😍 #MyBabyZ 🤎#MamiFace.”

She Is Daddy’s Princess

Though Zhuri’s appearance is somehow like her mother’s, she is daddy’s little girl. The tot even mimics her dad’s expression and can be considered as his heart. Being the youngest in the family, she is pampered by all the members, even her brothers.

On the other hand, the baby is also mostly found cheering for her dad during the game. Actually, during a game in December 2017, when Zhuri was watching her old man play, she asked for some candy from him. No wonder, as she was a child and he was just her father to her.

Like any good papa, the basketball player stopped in the middle of the game and asked if anybody present in the game had candy. He didn’t join the match until he found the sweet treats from a man for his bundle of joy. Despite having two sons, the daughter is the boss of all including her daddy.

The cute, confident, and attractive looks of the youngest James have attracted much public to her. In fact, she was already popular before she was born as she was the first child of the duo after their nuptials.

Zhuri has a good number of 399K followers on her Instagram under the name “allthingszhuri.” Her account is handled by her parents with the Insta feed being full of her stylish pictures.

Besides, she also has her own YouTube channel “All Things Zhuri” with 205K subscribers. The young and talented kid posts videos of baking, yoga, paintings, and DIYs on it. However, she doesn’t seem much active on her channel these days. Maybe she is busy with her studies as of now.

Meanwhile, she is also seen on TikTok despite not having her account on it. She mostly appears with Candice on her TikTok account flaunting her dance.

Who Is Candice to Zhuri?

What Is The Net Worth Of Zhuri Nova James?

The star kid though of small age has already started making millions. She as a YouTuber, a media face and a celebrity kid with her own Insta page has a net worth of $1.5 million. While she is enjoying her early days in a lavish way, Zhuri is also unknowingly making earnings already.

Likewise, her father is a billionaire with a total fortune of $1.2 billion. James has made his worth through his NBA career as well as from brand endorsements, business investments, and his own production company. As a matter of fact, he recently on August 18, 2022, re-signed a new two-year contract with the LA Lakers for a total of $97.1 million, making him the highest-paid NBA player in NBA history.