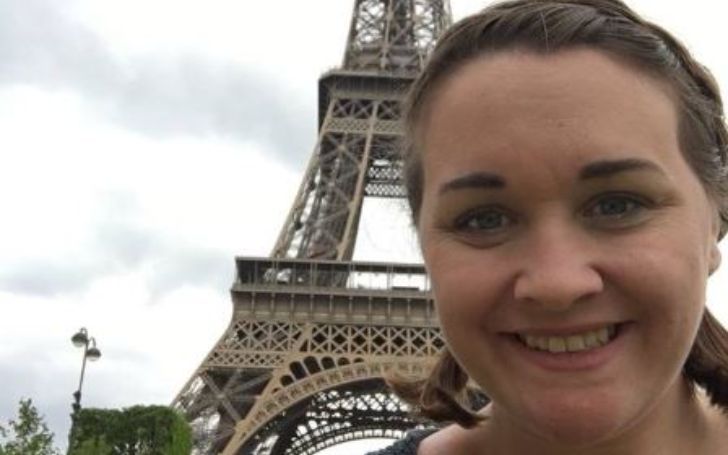 Lizzy Meyers rose to stardom as the daughter of the American businessman, political activist, and conspiracy theorist, Mike Lindell. In the media, her father is very well-known as the founder and CEO of a company named, My Pillow, Inc. It is a manufacturing company that manufactures pillows, bedding, and slipper.

As a celebrity child, she has become a subject of a lot of curiosity. Similarly, people raised many questions regarding Lizzy’s life and some have even made their own theories.

So to clear up all those wrong full rumors, and answer those questions, we have an article about Mike Lindell’s daughter Lizzy Meyers. Therefore, we have also included her age, career, relationship status, and many other, here in this write-up.

Who Is Lizzy Meyers? Info Regarding Her Age, Bio, Siblings

As said before, Lizzy Meyers is the daughter of businessman Mike Lindell. In spite of that, she is also the first child of Mike and his first wife Karen Dickey.

Moving towards her age, she is 34 years old. Lizzy was born Elizabeth Lindell in 1988, in Minnesota, USA. Her birth date and age were confirmed from her father’s biography book titled, What Are the Odds? From Crack Addict to CEO: Mike Lindell. The book is available to purchase on Amazon.com for $11-15.

Apart from this, talking about her siblings, Lizzy has one half-sister named Heather Lueth, and two brothers Darren, and Charlie Lindell.

Lizzy Meyers Has Had A Happy Childhood

Thanks to her parents, she was able to experience the real meaning of happiness. Since her childhood, both Mike and his ex-wife Karen have given their best in every part while their kids were growing up.

At the age of five, Lizzy was able to experience what is called having a family photo. In fact, for a family vacation, when Lizzy was around 12-14 years old, her whole family including Lizzy, has gone to Florida.

Meanwhile, when she was 2 and a half years old, she has done a silly mistake. At that time, her brother Charlie was just 18 months old, and he was taken to the emergency room for dehydration.

No one noticed why that happened until Lizzy was caught red-handed in the corner drinking her brother’s baby bottle. It came out that she had been stealing Charlie’s bottles from his crib, drinking until it gets dry. Then keeping them back empty.

Mike’s daughter Lizzy Meyers has been seen multiple times in the film industry. She has starred in a documentary film about her father. The movie was titled, The Mike Lindell Story: An America Dream.

It was about how Mike Lindell came to the limelight and gathered his fortune from his brilliant idea of producing pillows, after a long journey with extreme money issues, drug addictions, and adversity.

Besides, Meyers has worked as an art production assistant in a 2022 American thriller film, Gone in the Night.

Relationship Status: Is She Dating Anyone?

Lizzy is in a blissful marital relationship. She disclosed her relationship through her Twitter account, where on her Twitter bio, she has written “married.” Not only that but, she has also mentioned “mom of two boys.”

However, her hubby’s name and identity are still missing. Besides, the mother of two recently lives in Eden Prairie, Minnesota. Although she hasn’t revealed her husband and their kids’ identity, we hope her family is living a happy and prosperous life.

Lindell has stayed in a marital relationship two times, so far. At first, he married Lizzy’s mother, whom he met in early 1985. At that time, Lizzy’s father had a part-time job tending bar at a Chaska bar called the Statesman.

It was the month of August when he first met, Lizzy’s mother Karen. Karen had come to the bar just to meet her former colleagues, as she used to work there. In an instant, Mike felt like he was going to marry her.

Moreover, Karen was already a mother of one child. Despite, finding it out, Lindell said, “I was 100 percent confident of this declaration.” However, Karen wanted to marry the father of her then-two-year-old child. But, that guy didn’t have the same mindset.

A few days later, Mike decided to ask Karen out on a date. To his surprise, Lizzy’s mother accepted his approach. However, after three dates, Karen started denying him. In fact, her words were just a flat-out “No.”

After facing a lot of problems to impress Karen, they finally got married in May 1987. They went to the Bahamas for their honeymoon. After returning from the wedding vacation, Mike decided to adopt Karen’s daughter Heather.

Around a year later, Karen was pregnant with Elizabeth (Lizzy). However, after nearly 20 years of their marriage, nothing remained the same. Both of Lizzy’s parents went their own ways. Then, in 2013, her father Mike walked down the aisle with his second wife Dallas Yocum.

How Rich Is Lizzy Meyers?

Despite knowing Lizzy’s professional career, there aren’t any authentic online tabloids that have talked about her fortune. So, as of 2023, her total estimated net worth is still under the media radar.

Besides, Meyers’ father Mike is a multi-millionaire, as he has a hefty amount of net worth estimated at $50 million, so far. He mainly earned his wealth from the business My Pillow, which he formed in 2004.

As we already said Lizzy is a very secretive individual, so she isn’t available on any social media handle rather than Twitter. Like most celebrity kids, she also prefers to live a life behind the curtains.