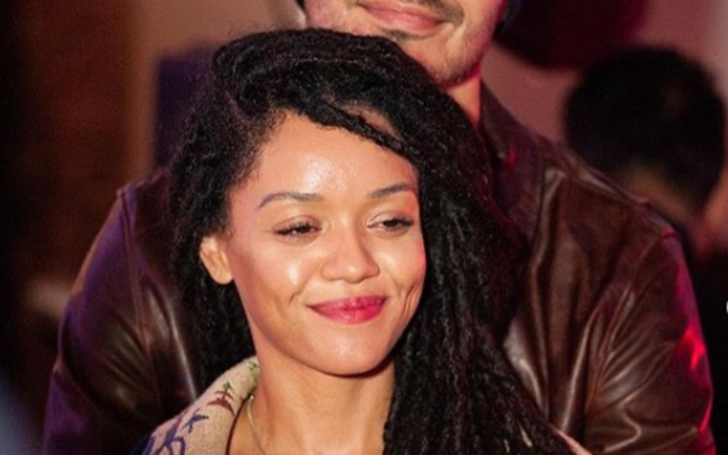 Adelfa Marr is a virtual life tutor and a mental health coach who is more famous as the wife of Manny Montana. Marr’s husband is known for his role of Johnny Turturro in USA Network’s series Graceland and Rio in NBC’s series Good Girls.

Marr is a tutor coaching clients of all walks of life with a mission to help them find guidance, work with them on a daily basis to achieve their goals, and help them achieve their elevated versions.

Know how she got into the career, her life before the fame, her personal as well as her current endeavors all in the article below.

Adelfa Marr was born in Queens, New York on August 3, 1992. Her parents are immigrants who worked hard for the survival of their families. Marr has an older brother named Michael Martinez.

Talking about her education, Adelfa studied psychology while in school and later did a lot of self-study on the subject, looking into several forms of healing, valuing, and analyzing herself. The New Yorker apparently attended Guttman Community College.

She has also created a name for herself writing blogs for websites like 21Ninety, Thirty, INKind.life, and Byrdie.

The California resident claims her interesting perspectives are the results of her past experiences filled with intensity, trauma, joys, and such.

As mentioned, she is also a mental health coach who focuses on solutions regarding anxiety and depression. Over her career as a mental health expert, she has dealt with people having issues such as rape/abuse, family trauma, relationship, work, domestic abuse, daily routines, etc.

As a coach, Marr works with clients to ensure that all aspects of their lives are taken care of and that they have a well-rounded, happy, healthy, and high vibrating life.

Through her websites, she raises funds for Black, Indigenous, and People Of Color, in need, and also practices social activism. Montana’s better half started her career as a life mentor in February 2019.

She Appeared in “Good Girls”

She has also starred in “Good Girls. She plays the role of Dylan in an episode titled, ” Take Off Your Pants.” (TV Episode 2019/season 2, episode 6). Her appearance was a one-off cameo as a woman who kissed Rio to make Beth (Christina Hendricks) jealous.

How Did Adelfa Get Into Life Coaching?

In an interview, when asked what inspired Manny’s wife to start helping people with their lives, she answered,

Marr, however, believes it’s her Instagram stories that really kicked off her career as the life guru. She explained she would post a topic titled “both sides” over her stories section and it would get overwhelming responses and engagement. Initially, she started small, asking people to have their views on tattoos.

She claims she started “both sides” in order to help realize people that one thing can mean different to different people; one necessarily doesn’t need to criticize or love the same thing at the same time. “And that’s okay.”

Then people started reaching out to her regarding domestic abuses. There were times she would get about 50 to 70 DMS regarding the issues; victims who just wanted to talk. Eventually, she responded and after talking with people — for a considerable amount of times, she gradually turned into what she’s today. Ironically, she never thought of becoming a therapist despite having a psychology background.

Marr loves dealing with her clients through online mediums because she believes it almost gives them a sense of confession; like they’re not looking at somebody so that they do not have to worry about their listener’s reactions and such.

The internet therapist states working remotely also helped her reach people despite the 2020 pandemic. She said people could still interact with her and were sort of able to express their problems casually; by texting her directly. Adelfa argued her clients didn’t feel like they were in a tight room by interacting with her through the clouds.

Marr and Manny met in 2015 and married in 2016. Together, they have a son whom they keep away from social media as much as possible. The couple didn’t announce the news of their wedding until 2018.

Marr has made it quite clear that she doesn’t want to share the story of how she met her husband. She mentioned one of the things that make her partner stand out is the fact that he’s never been the guy who says, “it’s your fault; not once.” Adelfa believes it’s that character of him that has made their relationship strong.

In her Instagram Q & A session, the deadlock-haired revealed her one of her lifelong dreams was to become a mother.  The mental health advocate explained how her special relationship with her parents made her always craving for motherhood. She added being a mother has been one of the best, most life-changing, and challenging things she’s ever done. It was after having a baby that she switched to Matcha from coffee.

Marr resides in Long Beach, California along with her husband and child.

Before her current spouse Montana, Adelfa, Herself Was In An Abusive Relationship

In June 2021, while talking with Soul Deep, Adelfa revealed she was in a brief yet shitty and abusive relationship. When asked if she, herself, had gone through such experience, she answered saying,

“For anyone who doesn’t know me!! I don’t think I have talked about this in a while, but I was in a just shitty relationship with somebody and it got pretty abusive.”

She described her then situation as something that is always hard to explain; she said she hesitates to bring up the topic because she thinks people would take it as some kind of an excuse or judge her for not walking out of it.

Marr explained while she had the option to break it away, she just couldn’t do that in that her ex-partner had become a part of her life. He’d been involved in her work life, friends, location, and all. She was in New York at the time.

Adelfa, however, didn’t mention who was her abusive ex-boyfriend. She said although the relationship lasted for only about three months, for her, it felt like ages.

The Secret Behind Adelfa’s Dreamy Hair

One of the things that fans find extraordinary about Adelfa is her busy, lustrous natural curls.

Marr has confessed maintaining her hair has been a tough journey for her. In her Ig, the mother of Manny’s child detailed how she takes care of hair. She said she washes them with Pantene charcoal shampoo and conditioner. Montana’s spouse makes sure she gets a deep clean from that.

Additionally, she explained, once a month or so she would do a deep condition and then go for @curls blueberry bliss control jelly. Afterward, she airdries them for 48 hours.

While talking on How Do I Know You in July 2019, the Queens-born Instagram influencer described how she took actress/comedian, Tiffany Hadish’s take on cultural appropriation after her 2017 film Girls’ Trip.

On the podcast, Adelfa said,

While Marr acknowledged the fact that she liked Tiffany’s job in Girls Trip, the comedian trying to portray the same character, again and again, post the movie much like Kevin Hart, was something she couldn’t agree with. She agreed with the fact that Haddish, becoming a character of herself, looked like she was rather deviating from her black culture and said “do the black thing!”

Adelfa explained although she has no problem with Tiffany being in that light, she thinks the actress should better be doing something good with it if she really wanted to be there.

“Don’t just sit there and make us look like uneducated and ignorant people!”

said the wife of Manny Montana.

The life coach even went as far as calling the Charmicail Show star a “monkey at the zoo that everybody’s coming to watch her act out.”  Marr said it consequently gives people to go home and be able to say “Oh yeah! black people say, go, girl!”

She concluded all that black stars like Haddish and Hart were doing was making black people look as bad as whites have thought they always were.

On the other hand, she showed a complete positive thought for Childish Gambino’s portrayal of genuineness in his work, remarking the artist as “phenomenal.”

Adelfa Marr’s go-to shows include This Is Us, Big Mouth, Kidding, The Office, Black-Ish, and Chef’s Table. She can also speak in Spanish; in fact, it’s her first language. She also loves HBO’s Euphoria.