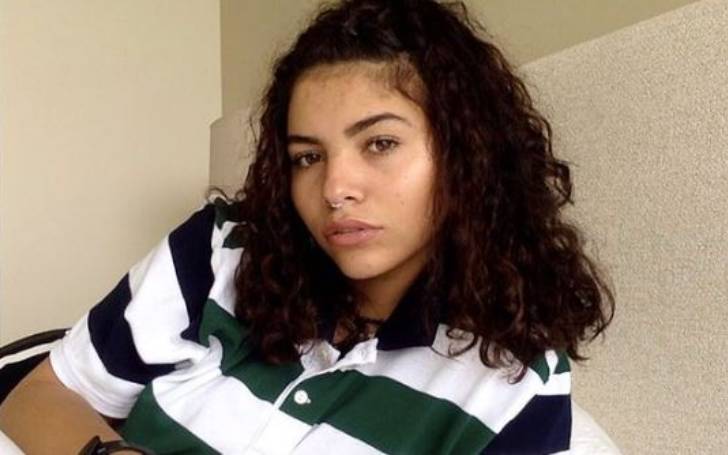 Alexandria Zahra Jones, 22, is an American media personality who is popular as the only child of late singer-songwriter and actor David Bowie and his wife Iman Mohamed Abdulmajid.

Zahra also goes by her nickname ‘Lexi’ or ‘Lexie’ on the internet. She is currently learning and working as an artist. Likewise, Lexi even sells her art online with one piece costing around $200.

Lexie currently has over 116k followers on IG where she posts her arts, life updates, and much more. Despite being born a star kid, Zahra lives a private lifestyle and doesn’t post much about her personal life apart from stuff she wants to. Find out more about Alexandria Zahra Jones aka Lexie’s early life, childhood, parents, & career. Also, is she dating anyone? Know here.

Who Is Alexandria Zahra Jones?

Star kid Alexandria Zahra Jones was born on 15th August 2000 in New York, the United States of America. She was born to David Bowie and his second wife Iman at approximately 5:06 am at Mount Sinai Hospital.

Zahra turned 22 in August 2022. Likewise, her birth sign is Leo. She is an American by nationality and has a mixed ethnical history. The 22-year-old Zahra graduated from high school in 2018 and even shared the good news via IG.

Meaning Behind Her Name

Late celebrity David and his wife Iman named their first and only child Alexandria Zahra Jones after the Greek-Egyptian city.

While the name sounds as beautiful as it already is, it means ‘defender of mankind’ while her middle name Zahra means ‘inner light’, ‘luminous’, ‘fair’, ‘beautiful, ‘blossoming’, or even ‘shining’.

Not to forget, David cut the umbilical cord himself after her birth.

Though Lexi is the only child of David and Iman from their marriage, she has two other siblings. As per reports, she has a brother named Duncan Jones and a sister named Zulekha Haywood.

Her brother Duncan was her father’s first child from his first marriage with actress Mary Angela Barnett. Similarly, her half-sister Zulekha is from her mother’s marriage with former basketball player Spencer Haywood.

Alexandria Zahra Jones Is An Artist By Profession

As mentioned earlier, Jones is an artist currently based in Los Angeles, California. She focuses on abstract proportions of figures and distorted faces.

According to sources, she lists her artwork, doddles, and customized clothing in her Depop account from where she sells them. Her artwork costs around $200 to $250 per piece. It is quite a surprise that Zahra did not go for modeling or acting like her parents even though she was offered countless jobs.

As per her mother Iman’s interview with The Sun, she revealed that she didn’t want Jones to follow in her footsteps while she was still young. She says,

“Have a life that is private while you can, because one day soon it is going to be public, so enjoy this.”

“Every agency, every designer, called me to say: ‘If she wants to, we’d love for her to model for us. I know why they wanted her to model. It’s because she is David Bowie’s daughter.”

Lexi Is Also A Musician & Poet

On 16th February 2021, Alexandria gave her fans and followers a surprise with her unreleased, raw, and beautiful song stunning everyone. She captioned the post,

“I’m absolutely terrified to post this. I keep going back and forth between hating it and liking it but f*** it.”

The video quickly made headlines after her brother tweeted saying “Just found out that my sister can SIIIING! So THAT’S where those genes went.” A year later, the post has over 177k views with viewers praising her in the comment section.

Similarly, back in Dec 2020, Lexi posted a photo revealing her poetry talents. Over the course of time, she has posted a few pieces of poetry on her Instagram handle.

The then future husband-wife first met back in 1990 on a surprise blind date set by their mutual friend Teddy Antolin. After their first meeting, they met the following day for coffee, and just like that, they fell in love.

During his interview with Hello Magazine, Bowie revealed that he was already planning baby names after his first meet with Iman.

David and Iman got married in a private ceremony in Lausanne, Switzerland on 24th April 1992. Their marriage was later formalized on 6th June in Florence, Italy.

They welcomed their daughter in 2000 and lived a happy life in NYC until his death.

Alexandria Zahra Jones’ Father Passed Away Due To Liver Disease

The legendary singer and actor David Bowie died at the age of 69 from liver cancer. As per official reports, Bowie was battling cancer for the past 18 months before losing his battle on 10th January 2016.

Despite knowing about his illness, he kept it private and never let his fans, as well as his closest friends, know about it. David died two days after releasing his 26th or final studio album, Blackstar.

Respecting his final wish, Bowie was cremated on 12th Jan in New Jersey and his ashes were scattered in a Buddhist ceremony in Bali Indonesia. He was survived by his wife Iman and family.

Is The Young Artist Alexandria Zahra Jones Dating Anyone?

The 22-year-old rising star is currently single and fully focused on her growing career. According to a source close to Zahra, she is currently looking for opportunities and enjoying being a regular person.

Before this, she was dating fellow star kid Tristan Beltrami, the son of composer Marco Beltrami. Marco is popular for 3:10 to Yuma and The Hurt Locker.

The former pair were spotted together several times in LA in 2018. Sadly, as of 2022, there are no updates regarding their romance.

How Much did Zahra Inherit From Her Late Father? What Is Her Current Net Worth?

The fact that Lexi received 25% of her father’s estate after his death automatically makes her a multi-millionaire. She will receive her father’s inheritance after she turns 25. Her father, David Bowie was worth around $250 million at the time of his death in 2016.

According to Bowie’s will, he left nearly $100 million worth of estate to his wife and two children with 25-25% percent to Duncan and Zahra each. Similarly, he left his Soho apartment to Iman, $2 million to his longtime assistant Corinne Schwab along with shares in Opossum Inc., and lastly left $1 million to his children’s nanny.