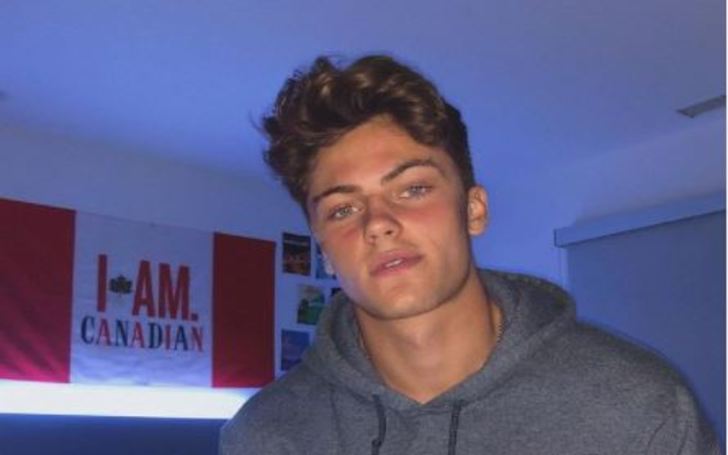 Harry Raftus, currently represented by The Fuel Injector, is an internet personality who is famous for showcasing his college and fraternity lifestyle online. His reach and popularity across social media include over 500,000 and 1million plus followers on Instagram and Tiktok, respectively.

Raftus’ TikTok activities are part of a growing niche on social media. It includes loud and irreverent college and partying content. Know more about the Orange, California-based Social Media Influencer; his life before becoming a breakout star in TikTok, a little bit more into his personal corner as well as an in-depth analysis of his TikTok benefits.

Harry Raftus Is A Canadian

Raftus was born on December 13, 2000, in Toronto, Canada. He used to do theater in school and was a rugby player; because of that, he said he had two completely different friend groups.

When still in high school, during mid-2017, he worked as an office administrator for Canaccord Genuity Group Inc, in areas like Toronto, and Ontario. He was responsible for researching and writing government structure presentations for previous fiscal years for traders.

Raftus studies at Dodge College of Film and Media Arts; joined in 2018. He is pursuing BA in Public Relations and Advertising. The now 21-year-old is set to graduate in 2022.

Harry Raftus Became Famous For His Ways Of Drinking

Raftus got his start on the one-minute video app in May 2020 by uploading montages of himself partying with friends. His account, however, didn’t start taking off until he began downing beers and hard seltzers in various settings.

By July 2021 Harry had gained 1 million TikTok followers mostly through his videos of chugging beers. In one of his videos, Raftus shotguns a Pabst Blue Ribbon against the scenario where a duck is pecking him. In another post, he bottles up a beer during a snowstorm. And in almost all of his videos, Raftus belches at the end as an outro.

As a social media star, Harry has personally promoted content for companies like Bumble, HouseParty, HeardWell. He additionally has run musical campaigns for artists like The Weeknd, DJ Snake, and others. The Ontario-born TikTok star, furthermore, has hosted ticketed events of over 2,000 people across the U.S.

He Is Famous For A Handful Of Drinking Games

In addition to being a celebrated TikToker, Harry, as of present, is the President and founder of FACE-OFF Drinking Game. It is a card game played in teams intended for social gatherings, get-togethers, and parties.

Raftus also has a collaboration with the viral drinking apparatus, ChugBud, and currently has a branded product by his name sold on their site. He additionally has a feature segment on Young Hollywood’s YouTube account and an article in the Business Insider.

For the future, the college student says he wants to own an alcohol company or a clothing line.

Does Harry Raftus Have A Girlfriend?

In an interview with Young Hollywood in Feb 2021, Harry Raftus said he had been single for some time and was enjoying it more at the time. Raftus added he wasn’t looking for a romantic partner “anytime soon.” He, however, said he would consider dating after college.

Apparently, he is quite disinterested in having a relationship for the time being. As such, the maestro of shotgunning beers once admitted to replying to a girl in his DM but and hooked her up with his friend instead. He though mentioned his dream girl as someone who has a good sense of fashion; thrift style and vintage streetwear and is funny, smart, driven and has a super good sense of style.

A Break Down Of Harry Raftus Net Worth

Harry Raftus mostly generates revenues from song promos and alcohol-related brand deals. His drinking prowess has earned him the majority of his TikTok followers and subsequent numbers of advertisers. While Raftus’ drinking content doesn’t attract some family-friendly brands, it, on the other hand, lures some big marketers.

Business Insider reports the Canadian creator has earned thousands from song promos and cashes in some more from his drinking card game. He is among the creators like the TikTok collective Sway LA or the YouTube group the Nelk Boys, who have managed to turn partying videos into full-blown businesses. Not to mention, the beer chugger is also known to pull in some cash from merchandise sales.

A Bit More On His Income Model

Given the fact that Raftus’ drinking content isn’t family-friendly, he takes a different approach when looking to monetize his account. For starters, he has sponsorship deals with drinking-related startups like the card game Do or Drink.

The booze lover, in like manner, has worked with companies like Crank Lager and Bomani, a spiked-cold-brew brand. Raftus says he regularly receives unsolicited free booze in the mail from companies like Four Loko. He once revealed charging between $4,000 and $7,500 for a sponsored video campaign.

To say more, the figures depend on his schedules and how well it fits with his content style. The supposedly five-foot-ten-inches tall drinker likewise rakes in money by promoting songs on TikTok and reportedly pulls in between $1,000 and $2,500 for a 30-second TikTok video. It is reported, like the Nelk Boys, Raftus also has direct-to-consumer sales as another source of revenue.

Other Facts About Harry Raftus