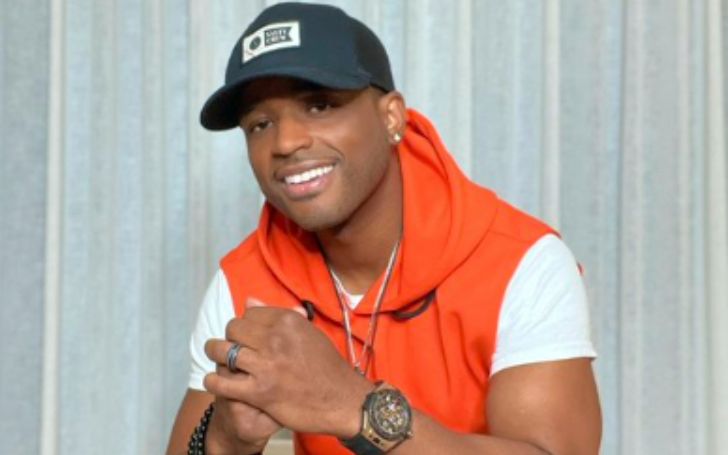 Larenz Tate is an American television and movie actor who has appeared in several movies and TV shows such as Power, Rush, A Man Apart, Crash, and, more. Apart from being an actor, he is furthermore a producer and a director.

Stepping into the entertainment industry at an early age, Larenz has decades of experience and has made the identity on his own. Likewise, his siblings are too in the same field and have also supported him in his need. Tate’s hard work has paid off making him one of the most successful artists in the industry with millions of fans & followers. But, what’s besides his career? Well, he is married to his beautiful wife for several years and is also a father to his four beautiful kids.

Despite the popularity, Larenz likes to keep it low-key when it comes to his family and personal life. So, dive into the piece below to find out all the detailed information about the multitalented actor, Larenz Tate. Also learn about his age, height, net worth, and more.

The American actor Larenz was born to his parents, Larry Tate and Peggy Tate on September 8, 1975. Even though Larenz hails from Chicago, Illinois, United States, he later moved to California with his mom, dad, and brothers. He was only four years old when he left his birth city. However, according to some sources, it was the year 1984, when he moved to California, but the fact is yet to be confirmed.

Talking further about his early details, the Chicago-born Tate belongs to mixed (African-American) ethnic descent and holds American nationality. Furthermore, he follows Christianity and his sun sign is Virgo.

As for education, Larenz enrolled at Palmdale High School for his primary education. He graduated from there in 1993. Regardless, he has not revealed further information about his academics other than this.

How Old Is Larenz Tate?

Larenz Tate Is The Youngest Among His Siblings

The Power star has two brothers older than him. Larenz, the youngest in the family, is a bit more pampered and cared for by all the family members. His eldest brother Larron Tate (born Larron Demetris Tate) came to this world on Jun 28, 1969, in Chicago. Like his little brother, Larron is also a producer, actor, and director with more than 25 years of experience on and off-screen.

Likewise, his elder brother Lahmard J. Tate was born in 1970. He is also an actor, producer, and writer who is notable for Rocky Balboa (2006), Barbershop (2002), and Don’t Be a Menace to South Central While Drinking Your Juice in the Hood (1996). Nevertheless, Lahmard is not as popular as his other brothers.

Who’s the Oldest Between Larenz Tate And His Brother?

As mentioned earlier, the oldest among the Tate brothers is Larron Tate and the youngest among all is Larenz Tate.

Yes, Larenz Tate is married to his longtime girlfriend-turned-wife Tomasina Parrott. The husband and wife tied the nuptials on November 30, 2006, after dating for six years. The couple is still going strong in their relationship and is enjoying their marital life. However, the news of Larenz and Tomasina sleeping in different rooms left many eyebrows raised at one time.

Since the pair lives a low-key life without much external interference, many assumptions were made regarding the situation. Nonetheless, Tate later explained it by saying that his wife is immensely fertile and she “gets pregnant” every time they have their moment.

When Did Larenz Tate And His Wife First Meet?

Well, the lovebirds came across at one of their common friend parties. Though the duo doesn’t usually discuss their personal life in public, Tate once in an interview in 2020 let his fans know about his love life with his spouse.

He said that he met his then-girlfriend “almost 20 years ago at All-Star Weekend in Oakland when Vince Carter did the crazy dunk.” It was Jamie Foxx’s party and it was actually him who wanted to hook up with a girl and needed Larenz’s help. Doing so, Tate started talking with the particular girl’s friend who later became his own girlfriend and now his life partner.

You guessed it right! It was Parrott with whom Tate was chatting the whole night to help his friend and ended up making his own connection. According to the actor, they even exchanged numbers and agreed to hang out after their return to LA.

Larenz Tate Is a Father of Four Kids

The beautiful relationship of the husband and wife is not only blessed with spacious love but also four baby boys. No doubt in Tomasina’s fertility as mentioned by her groom. The duo was already gifted with their first bundle of joy before their marriage and three eventually after their wedding.

The eldest son is named Miles Xavier Tate who was born on July 29, 2006. Yet, their first son after their nuptials is Zander Tate whom the pair welcomed after 2 years intervals on June 27, 2008. After five years of Zander’s birth, Zion Tate, the third son of the Tate family was born on November 2013.

As the parents are very concerned about their kids’ security and privacy, the mom and dad haven’t revealed much information about their children. Having this said, Tate and his sweetheart haven’t opened up about their fourth baby. The life partners haven’t even disclosed his name.

As we mentioned earlier, Larenz Tate is an actor, producer, and director. His career started at an early age as his parents sent him to a drama program at the Inner City Cultural Centre along with his brothers. Though they were initially not interested in acting, they later took it seriously after one of their classmates got a role on The Cosby Show.

In due course, all the Tate brothers began dedicating themselves to the drama and started getting small roles. Nonetheless, Larenz’s debut role on screen was through the TV show The Twilight Zone (1985). Upon starring on several TV shows he eventually also starred in his first movie Menace II Society as O-Dog (1993), and his first TV film was Gun Hill (2011).

Larenz Tate, with time, kept on doing multiple movies and TV shows. He has appeared in Power, Rush, Dead Presidents, A Man Apart, The Royal Family, and more. No wonder, he has made a big name and his own identity in the entertainment industry with millions of fans and followers.

This may be a surprise to many but yes, the two are related to each other. In one of Snoop Dogg’s tweets on Oct 28, 2020, he revealed that Tate is his real cousin.

From this tweet, we are pretty clear and sure that Larenz is Snoop Dogg’s cousin.

Net Worth: How Rich is Larenz Tate?

Being in a successful career for more than decades, the dad of four is making a lot of money. Larenz is a multi-millionaire with a net worth of $2.5 million. He is living a lavish life and providing his kids with a wonderful life as well.

Unlike his other family members, Tate is active on all social sites regardless of not posting much information about his family but mostly about work. He has millions of followers on his social accounts including Instagram, Facebook, and Twitter.

All his accounts are under the name Larenz Tate with 3.2M followers on Instagram, over 1M followers on Facebook, and 589.8K followers on Twitter. He keeps posting on his feeds now and then. His social sites are covered with pictures related to his work and his brothers.

What is the Height of Larenz Tate?

Larenz Tate is a talented American television and film actor who stands at the height of 5 feet 6 inches tall. He has a dark brown set of eyes and black colored hair.

What Happened To Ren Kennedy? Her Career, Husband, & Other Details