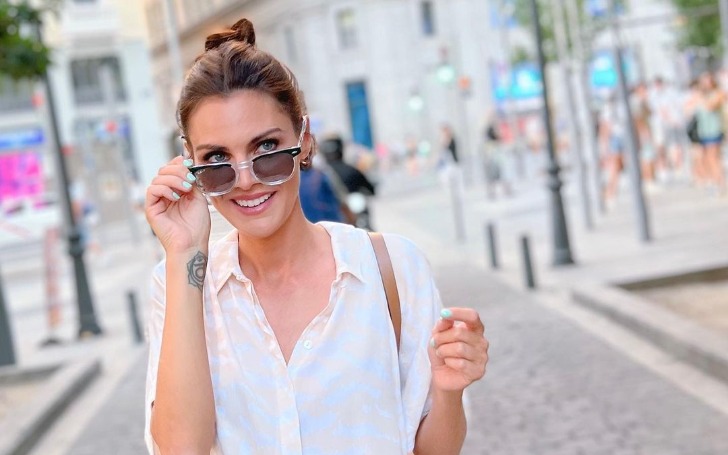 Amaia Salamanca is a famous Spanish actress who is widely known for her character Catalina Marcos in the Spanish version of the Colombian TV series Sin tetas no hay paraiso for which she got a nomination in the Union Awards. Further, she is equally famous as Alicia Alarcon in the Spanish drama TV series Gran Hotel.

Alike her career, her personal life is also graceful and happy. Salamanca is a mother and a great companion for her partner. She has been with her better half Rosauro Varo for more than a decade and beautifully leads their life together. Well, in that case, when did the couple get married? How many children do they share?

Here, in this article, we are going to explore every untold professional and personal detail of the Spanish actress Amaia Salamanca. Read the article till the end.

The beautiful Amaia was born ‘Amaya Salamanca Urizar’ to her mother Rosana Urizar and her father Miguel Angel Salamanca on the 28th of March 1986 in Coslada, Madrid, Spain. As of 2022, she is 36 years old and has a birth sign, Aries. She spent most of her early life in her hometown Madrid alongside her sibling Mikel Salamanca.

While growing up, she was interested in athletics more than acting. The now-famous actress has shared her interest in games on her Instagram with a caption,

From when I was high jumping at age 12. The most beautiful moments of my childhood are tied to athletics and their championships. Too bad the height didn’t accompany me 😂

Besides, a Coslada native is Spanish by nationality and probably belongs to the Hispanic ethnicity.

Amaia Salamanca Is An Actress; Her TV Shows And Movies

As we mentioned earlier, Amaia as a child was inclined more toward sports. She really had no planning to pursue acting as her career. But due to some circumstances, she ended up giving an audition for a TV series named SMS, sin Miedo a sonar. In SMS, she portrayed the character Paula along with other TV actors like Yon Gonzalez Luna, Mario Casas Sierra, Aroa Gimeno, and Maria Castro.

Following her first acting job, she then was signed up for numerous television series. Salamanca made a guest appearance as Cristina in the series Los hombres de Paco Season 4. And then she did No estas sola, Sara, a TV film Velvet and Felipe y Letizia, Teimpos de guerra (Morocco: Love in Times of War), La embajada, and several others.

Apart from TV series, she is an actress in several films. Amaia first appeared on the big screen in the year 2009 as Natalia in the movie Fuga de cerebros (Brain Drain). Her other movies include Tension sexual no resuelta, XP3D, Nuestros amantes (Our Lovers), Perdida, La piel del tambor (The Man from Rome), and others.

Amaia Is A Model And Theatre Artist Too

Coming up to 2022, she has been into some of the theatre work. In 2009, Amaia made her theatre debut through a novella by Heinrich von Kleist titled The Marquise of O. She has also acted in some music videos like Antonio Romero: Ansiedad, La Musicalite: 4 elementos, SMS: No te enfades, and others.

Aside from her acting career, she also works as a model for several shows & photo shoots.

Amaia Salamanca Is In Companionship With Her Partner Rosauro Varo: Are They Married?

The Gran Hotel famed actress is in a romantic relationship with the Sevillian businessman Rosauro Varo Rodriguez for more than a decade. Though they are together for a long time, the duo is not married yet.

Recently, in an exclusive talk with adventurer Jesus Calleja, she revealed that she is not married to the love of her life yet. She said,,

“We are not married, but we have three children and it is exactly the same. Getting married was not going to mean that we loved each other more.”

However, as per her Instagram post that Amaia posted on June 6, 2016, we can certainly say that her boyfriend Rosauro means everything to her. Though they are not married, she prefers to call him her husband. Look at a caption,

Amaia And Her Husband-To-Be Rosauro Are Together For 12 Years: How They Came Along?

The couple for the first time came across in the year 2010 at a party in Ibiza and instantly fell in love with each other. In this regard, she said,

“it was love at first sight because I had a lot of fun with him. I called my parents from there almost without a voice and I told them that I had fallen in love… They would think that they had lost me,”

The two found a great connection in their first meeting and from that moment on, they have not separated. The beautiful duo are in great bonding and gracefully leading their partnership together.

Amaia Salamanca Is A Mother Of 3 Children

From her relationship with her longtime boyfriend Rosauro Varo, she became the mother of 3 children, 2 sons, and a daughter. Amaia became a mom for the first time at the age of 28 when she gave birth to a baby girl named Olivia Varo Salamanca. Her daughter Olivia was born on April 9, 2014, and now in 2022, she is 8 years old.

After a year, she welcomed a son named Nacho Varo Salamanca with her boyfriend on September 8, 2015. In 2022, Nacho is 7 years of age. Likewise, Amaia’s youngest son is Mateo Varo Salamanca who was born on October 7, 2016. The year 2022 marks Mateo of 6 years old. Seeing their age, Amaia’s all three kids are certainly school students.

The 5 feet and 6 inches tall actress is hugely active on social networking sites. She has an official Instagram account under the username @amaiasalamanca with 982k followers. Also, she is on Facebook which goes by her own name with 240k followers.

Further, Salamanca is also on Twitter under the username @AmaiaSalamanca with 6,791 followers.

How Rich Is Amaia Salamanca? Her Net Worth

Amaia is rich enough to live a luxurious life. As per sources, she has an estimated net worth of $3 million. Her major source of income is her career in acting and modeling.