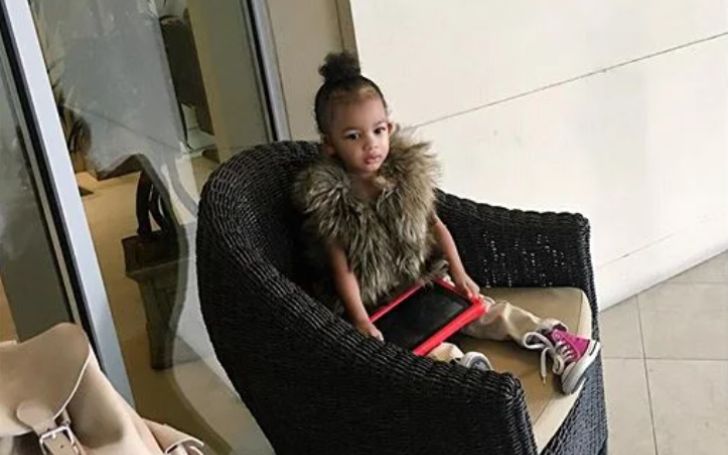 Ava Marie Jean Wayans is the lovely daughter of actress and TV personality, Vanessa Simmons and her long-term boyfriend, Michael Wayans. Her loving parents have been together for over 17 years and have equal participation in raising their daughter, despite their busy schedules. However, information on little Ava has been kept off the radar since the very beginning.

So, the question here is, are Ava Marie’s parents married? They soon will be together for almost two decades, yet we have not come across a single piece of news of them tying the knot. On the contrary, despite not being husband and wife, Simmons and Wayans have given their baby girl the life she deserves. She is just 8 years old today, however, has a lavishly great lifestyle.

Hence, to know more about who Ava Marie Jean Wayans actually is, read the article below! Who is she besides just being a star kid? Let’s find out together!

Ava Was Born A Day Before Valentine’s Day; Information On Her Earlier Life

Vanessa Simmons and her actor boyfriend, Michael Wayans welcomed their darling daughter, Ava on 13th February 2014. She soon will be celebrating her 9th birthday in 2023.

Since the very beginning, Marie Jean has been the light of her parent’s eyes. They had been together for almost 9 years when their little angel entered the world. Since then, both Simmons and Wayans have given their best to become the best parents ever. Despite them both coming from a famous backgrounds, they have tried hard to protect their daughter’s true identities. Even more so, the couple does not post many pictures of Ava on social media as well.

Furthermore, the star of Run’s House was even more skeptical about letting the world know when she was pregnant with Ava. As it turns out, the actress did not initially want to reveal her pregnancy because she wasn’t married to her baby daddy.

In October, in an interview, she said,

“There’s this whole idea of first comes the marriage then the baby carriage so I was so nervous.”

However, it all worked out for the best in the end. Simmons’ parents were 100% behind her in supporting her during the pregnancy. They even threw a grand baby shower in January before the arrival of little Ava. This helped Marie Jean’s mother to cope with her difficult time during pregnancy.

Ava Marie Jean Wayans Mother Is An Actress And TV Personality; Will Ava Follow Her Mother Into Becoming An Actress Herself?

Ava’s mother, Vanessa Simmons became famous through an MTV reality show, Run’s House. Between 2005 and 2009, Simmons’ whole family was featured in the show. This brought a lot of fame into her life. Even before all this, she was better known as the daughter of Joseph Simmons, aka, DJ Run. That’s right, 8-year-old Ava is the granddaughter of the famous American rapper and one of the founding members of the hip-hop group, Run-DMC.

Furthermore, despite having a famous father, Simmons was able to establish a great career for herself. Today she is known as a beautiful actress and TV show host.

Moreover, she has appeared in soap operas like Guiding Light and had brief roles in movies like Speed Dating. In addition to this, she had a small role in the film, Dysfunctional Friends, along with starring in a 2014 web series, Mixed. Following this, she became the host and judge of Project Runway: Threads.

So, people now are asking whether Ava Marie will follow in her mom’s footsteps. It is hard for us to say what she’ll do in the future as the little girl is just 8 years old today. Even more so, we aren’t quite aware of her hobbies as well because of her very low profile. Therefore, it is very hard to make a guess.

Regardless, Ava is in school today and is working towards a greater future. We will just have to wait and see if she actually enters showbiz.

Simmons Is More Than Just An Actress; Ava’s Mom Is Also An Entrepreneur And A Designer

After gaining a lot of fame and fortune in the TV and film industry, Vanessa explored her entrepreneurship and designing skills as well.

She and her little sister, Angela Simmons, are the owners/designers of the brand, Pastry. It is an online brand for sneakers and other accessories. This duo of sisters runs this brand together and is very successful as well. Moreover, they claim to produce “America’s #1 Dance Sneakers”.

Is Ava Marie Jean Wayans Dad Also An Actor? What Does Wayans Do For A Living?

We are pretty aware of Ava’s mother’s successful career. However, her dad, on the other hand, lives a quiet life, away from the hassle of media. Nevertheless, despite his low profile, Michael Wayans is an actor like his lovely girlfriend.

He is not as famous as Simmons, but he has played remarkable roles in some movies. He is better known as the actor who played in Blankman, Dance Flick, and My Wife and Kids.

Ava’s loving parents came across each other in 2005. Unfortunately, information on how they actually met isn’t easy to find. Since the very beginning of their relationship, Simmons and Wayans have kept their relationship off the radar. In other words, they want to be together without any pressure from the media.

Furthermore, the couple’s need to keep their relationship private also leads to them protecting their child’s identity. In an interview, Vanessa shared,

“I just like to keep a little bit lower profile. It’s hard to display your life and have people judge everything about you. I just want to keep [Ava’s] life as normal as possible for as long as possible.”

Therefore, we have to respect the power couple’s decision in keeping things quiet. Despite being famous, they need their own space to live life to the fullest.

On the contrary, we do know that Vanessa and Michael love each other to their very core. They have been together for almost 17 years and the love hasn’t faded; it keeps growing with time. Also, with the arrival of the 3rd member of the Simmons-Wayans family, the couple has become inseparable. They have stuck together through thick and thin, and we believe this will continue for a long time.

Are These 8-Year-Old Parents Married?

Despite being together for over a decade, Simmons and Wayans have not yet tied the knot. They are still boyfriend and girlfriend who happen to share a child together.

When questions were raised regarding their marriage, Wayans’ girlfriend revealed that they planned to get engaged soon in 2017. However, no news came out of the couple’s engagement in the years ahead.

Therefore, as fans, we must wait patiently until this powerful couple decides to get married.

Where Is Ava Marie Today? She Lives A Lavishly Great Life With Her Parents

Today, Ava is a happy 8-year-old kid who is enjoying a great life with her parents. She is the heiress of her parents’ combined multi-millionaire fortune. Her mother, who is an actress stands at a whopping net worth of $9 million dollars. Similarly, Marie Jean’s dad is with $2.5 million.