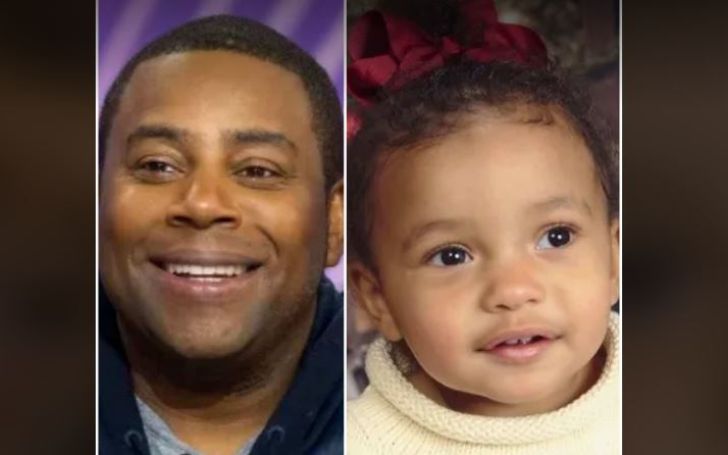 Gianna Michelle Thompson is the daughter of the SNL cast member, Kenan Thompson and his ex-wife, Christina Evangeline. Gianna is the second child of Kenan with Evangeline; the former couple had her in the late 2010s.

Gianna’s father, Kenan is the longest-dwelling cast member in one of America’s longest shows, SNL. From joining the comedy show in the early 2000s to winning an Emmy and getting a plaque on the Hollywood Walk of Fame, Kenan sure has a big profile in the entertainment industry.

But as mentioned he is also the father of two. And it might be worthwhile to have a look at how Thompson is off the screen, particularly for his daughters. As it turns out, the comedian has shared a fair share of anecdotes from the little life of his daughters. Read them all in the headings beneath.

The Effect Of Gianna Michelle Thompson Birth On Her Father

Gianna, the second daughter of Kenan and his former wife, Christina was born on Aug 1, 2018.

Once speaking of his second daughter’s birth, Gianna, Kenan said that after her arrival, things really went into override. The Good Burger actor also expressed his thankfulness in that Gianna was born years after his eldest daughter. He said that particularly because it apparently would have been difficult for him to change the diapers of two infants which Thompson says is the hardest thing to do.

Kenan has also admitted to having grown and matured in ways that he never imagined after the birth of his daughters.

Evangeline and Kenan didn’t reveal their pregnancy with Gianna until the final days of the delivery. It was some days prior to the due date that Evangeline finally announced she and Kenan were about to have their second child.

“I’m usually private when it comes to these personal things, but we have less than 5 days until this little girl is due and I am just TEW excited,”

said the mother of Gianna Michelle Thompson on her Instagram on July 28, 2018.

Gianna has an older sister, Georgia who is four years her senior. Kenan once said he is grateful that Gianna has an older sibling with whom she can run around and can learn 24/7. He revealed Gianna picked up things as she watched her older sister, things like walking up and down the stairs. Kenan also said Gianna gave him the second opportunity after Georgia to watch how quickly kids lengthen up.

Gianna might not get any younger siblings as Kenan once said while he wanted kids as many as a basketball team, he eventually decided that he may be just fine with two.

Gianna’s parents, the SNL star, Kenan, and now his ex-wife Christina met each other through a talent manager named Danny Estrada. They then tied the knot on Nov 11, 2021. The wedding took place at an aquarium in Atlanta, Georgia.

Three years into their marriage, Evangeline and Kenan would welcome their first child, a daughter, Georgia in 2014. Four years later, the now-former couple gave birth to their second daughter, Gianna.

While the news of their separation came only in April 2022, some claim, the couple had been living no longer together since 2020. They however were amicably and successfully co-parenting Gianna and her older sister, Georgia. Us Weekly later reported there wasn’t any dramatics behind Kenan and Christina’s separation.

Gianna’s mother is now dating her ex-husband’s SNL co-star, Chris Redd. Their relationship went public shortly after Kenan had completed his divorce from Gianna’s mother, Christina. Thompson, too, allegedly is dating someone however it is unclear who his new partner is.

Gianna’s mother, Christina Evangeline while not as famous as her father, Kenan, is still a successful model and actress. Evangeline who was born on March 24, 1989, has one notable credit in the 2015 short comedy film, Mini Supreme.

She is Canadian-born and is also a philanthropist and founder of Evermore, a charitable organization that assists people in dealing with grief and loss. Gianna’s mother and Thompson’s former spouse additionally oversee the organization’s overall volunteer work in the community.

Christina furthermore is a designer and also owns a floral shop in New York, by the name, Garden by Eve.

Gianna Michelle Thompson Also Has An Interest In Performing

When talking to Yahoo Life in Oct 2021, Kenan revealed that both of his daughters, Gianna and her sister, Georgia love to perform and that “they are very entertaining.” Kenan disclosed his big daughter Georgia reportedly is a wild one and the little one, Gianna is just fearless.

According to Kenan, his little girls often times also run their own show at home which they have titled The Georgia and Gianna Show. Their comedian father says it’s just like watching television.

Kenan told Yahoo Life that in the event that his daughters, Georgia and Gianna decide to go serious about it, he is all for it.

I’ll be there to support and keep the wolves away

said the father of two.

Gianna Once Started Talking Too Much To AI

Kenan in late 2021 revealed his daughters Georgia and Gianna once became so used to the AI voice system that he had to get rid of the system from his house. Thompson explained it, particularly, was his eldest daughter, Georgia who had become a good searcher and that she would really quickly figure out the search tab and the microphone.

Eventually she and her sister, Gianna started talking to Alexa all day long which ultimately made Kenan get rid of Amazon’s virtual assistant technology. Kenan said his girls were already becoming independent.

What Does Gianna Michelle Thompson Think About Her Father Doing Animated Movies?

In addition to being an actor and a comedian, Kenan has done several voices works in a number of animated projects. When asked how his daughters feel about that, the 44-year-old answered by saying,

It does. How cool it is for them, I don’t know. It depends…

If they were already on that thing and I wind up in the movie version, then they’re like, “Oh it’s incredible.”

Kenan also said his daughters, Gianna and Georgia however don’t care if their actor father is in a project that they haven’t heard or read of beforehand. That’s why the girls are also not that excited about their dad being part of the SNL or his recent show, Kenan.

Gianna Reportedly Has A Sneaky Sense Of Humor

In an interview with HuffPost in late 2021, Kenan said his daughters had developed a real sense of humor including his youngest girl, Gianna. Explaining that, Kenan said while his eldest daughter, Georgia is one of the biggest hams he’s ever seen, it was his second daughter, Gianna who had a real devious sense of humor. Thomson said hers could have come from her mother, Christina’s side while Georgia inherited his.

Part of the reason, Kenan said, his kids were funny was because they didn’t know what they are saying in the first place.