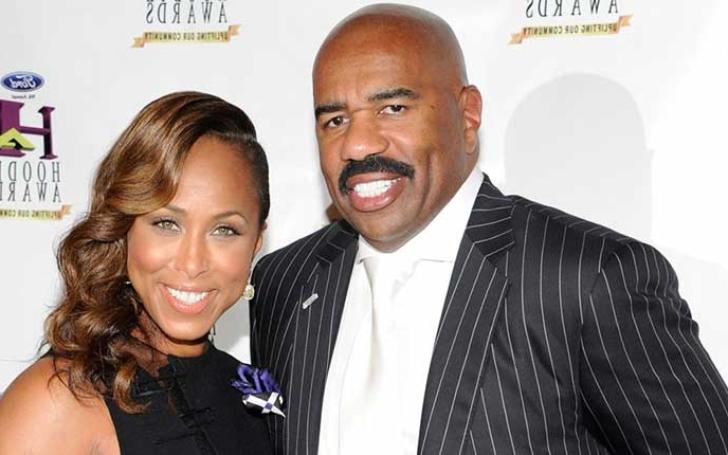 Steve Harvey faced tough times both personally and professionally for a long time. He had failed as a husband and father, yet the comedian kept moving forward. However, things brighten up for Steve’s after he married his third wife came into the picture.

But who was Steve Harvey’ wife before his third marriage? Today let’s take a close look at the TV personality’s personal life from the beginning and find out all about his ex-wives, divorce disputes, children & step-kids, and more!

Steve first tied the knot with Marcia Harvey in 1980. Back then, Steve was just a regular guy. To make ends meet he worked as a boxer, autoworker, insurance salesman, carpet cleaner, and mailman.

Despite all that Marcia was a great wife. She stood by him at his worst and supported him all the way. Soon the love birds became parents for the first time.

Why and When did Steve and Marcia got divorced?

It was in 1994 when Steve and Marcia finalized their divorce, but their relationship had been strained for several years before. In the mid-80s, after the birth of his two daughters, Steve abandoned his family in order to further his career. A decision, which made his relationship with his twins bitter for several years.

Steve recalled his dilemma and stated, “I’m married, I have twins [Brandi and Karli, now 33]. I’m supposed to provide for them, but I had to take this chance.”

The decision to move up the ladder came when Steve won 50$ paycheck on his first stand-up gig. The same day he quit his job as an insurance salesman. His decision of quitting didn’t bode well with Marcia.

This put a permanent scar on his marriage. Things somehow looked up after Broderick Jr. came into the picture. Nevertheless, their relationship ended.

After years of struggling, Steve had finally found himself in the entertainment world. He became the host of the acclaimed show, It’s Showtime at the Apollo. Moreover, his success in stand-up comedy helped him bag a role in the ABC show, Me and the Boys in 1994.

In addition, two years after the divorce from Marcia, he found love again. He fell in love with Mary Lee Harvey (nee Shackelford) and eventually they exchanged vows on June 21, 1996.

Mary and Steve have one son

The husband-wife duo welcomed their first and only kid, Wynton Harvey on July 18, 1997. The Steve Harvey Show host had already experienced parenthood and this time again. Whereas for Mary it was the first time.

At the time of his birth, Mary once mentioned that Wynton almost died. Even so, he soldiered on and live to see the next day.

Things were going pretty well before Steve and Mary decided to get separated.

After spending about 9-years together, Mary and Steve divorced. Their divorce was finalized in November 2005. Talking about their divorce settlement, Mary got three of Steve’s house, $40,000 per month till 2009, and $1.9 million after 2009. Safe to say, she got her pockets full.

Then in 2011, Mary surfaced yet again and claimed her divorce with Steve has left her materially destitute. What’s more, she also accused him of cheating on her with Marjorie, his current wife. She also alleged Steve has had other mistresses apart from Marjorie.

According to Mary’s claim, she once picked up Marjorie’s call during their marriage and also found out a letter from a woman named Terry. At the time, Collin County, Texas District Court Judge Robert Dry ruled Mary’s claim of being poor false.

Nonetheless, that didn’t stop Mary from playing the blame game. In 2017, she once again came forward and asked for half the money Steve had earned after divorcing her in 2005. She maintained that she stood by his side when he had nothing so naturally, she deserves all of his wealth after he made it big.

Furthermore, she also revealed that Steve turned her own son against her and snatched all of her wealth. During the custody battle, she was proved to be an unfit mother so Steve was given custody.

Steve is Happily Married to his third wife, Marjorie Bridges-Woods

It is often said everyone learns from their mistake and it couldn’t have been saying better in Steve’s case. The 63-year-old, after two failed marriages, is living a beautiful marital life.

He walked down the aisle with Marjorie Elaine Harvey on June 25th, 2007. Despite carrying two failures in his back, Steve didn’t hesitate once when it came to marrying Marjorie.

According to him, she is the only person in the world, who changed his life and made him a better man. If your boyfriend has such things to say about you, then marry the guy.

Besides, the couple first came across each other back in 1990. At the time, Steve was performing at a club and Marjorie happened to be in the crowd. As soon as Steve glanced at her, he said, “I don’t know who you are but I’m going to marry you.”

As fate would have it, he did marry this girl.

So Marjorie here, just like her husband Steve, has been married before. And that’s not the interesting part, she walked down the aisle two men, both of who are renowned drug lords.

She was first married to Jim L. Townsend. After he was sentenced to prison, she then exchanged vows with one-half of the infamous Woods brothers, Donnell Woods. Moreover, she also hooked up with Donnell’s brother, Ronnie Woods but after he went to prison, she got close with Donnell.

From her past marriages, she shares three children, Lori Harvey, Morgan Harvey, and Jason Harvey.

Steve and Marjorie are a proud parent of seven kids

After he married Marj, Steve also adopted all three of her kids, increasing his brood from four to seven. But unlike your typical step-father relationships, Steve here is a doting father to not just his biological offsprings but to his step-kids as well.

He often shares a lot of pictures with all seven of his kids. (Fun fact, his daughter Lori Harvey reportedly hooked up with big stars like Diddy and Future.)

In addition to seven kids, Steve and Marjorie also have five grandkids.