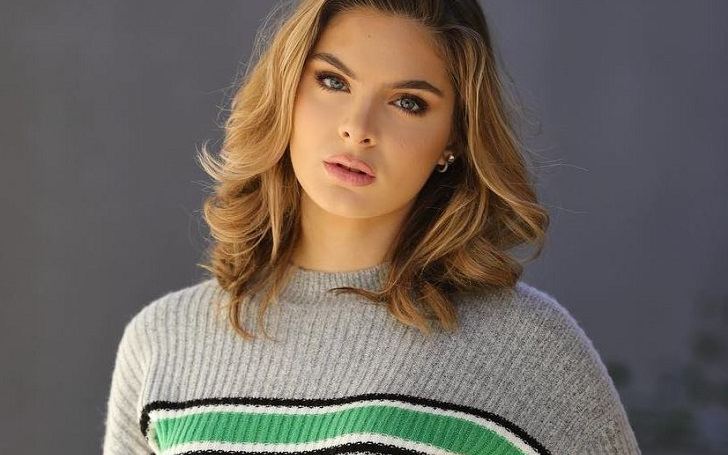 Brighton Sharbino is one of the most talented promising actors, who has already done a lot at such a young age of 19. With her perseverance and passion for the respective field, the young performer converted her dream into reality within a short span of time. Sharbino became the TV sensation winning worldwide popularity with the heartbreaking role of Lizzie Samuels on the smash-hit AMC TV series The Walking Dead.

Besides, Brighton was also in the news for her link-up with YouTuber, Ben Azelart. Rumors about Sharbino and Ben came after The Walking Dead star posted a picture of the two, looking all loved up. Are they still dating or what? If not, then who is Brighton’s new boyfriend?

To find out the answers to these questions and know more about her professional and personal life, keep scrolling.

Who is Brighton Sharbino’s Boyfriend in 2022?

Sharbinon is dating a boyfriend Micah Yamauchi for nearly a year. The two started appearing with each other on their social media handles by 2020 and are still together.

But, in past, for the longtime, Sharbinon had kept her love life behind closed doors. At the time, scrolling through her Instagram account, we didn’t find her with any guy. She generally shares pictures with her friends and family and sometimes some sensual pictures as well.

Brighton Sharbino and Ben Azelart: Were they dating?

Brighton was once rumored to be dating Ben Azelart, a Skateboarder turned YouTuber. Speculation about their romance came when the actress shared a picture with Ben on Instagram.

They never confirmed whether or not they were ever in a relationship. Besides, since 2018, it is reported Ben is dating Lexi Rivera.

Azelart is a skateboarder who is also popular on YouTube and Insta with a huge fan following. The Kailua Intermediate School graduate has 7.35 million subscribers on his self-titled YouTube channel as of 2021.

Additionally, Azelart has 5.7 million Instagram followers as of 2021. He is a passionate photographer as well.

Who are Brighton Sharbino Parents? Her Birth Details

Brighton Sharbino was born on 19th August 2002, in Flower Mound, Texas. She is the daughter of Ron Sharbino (father) and Angela Sarbino (mother). Besides, Sharbino holds an American nationality and belongs to white ethnicity.

As for her education, the promising star is a high school graduate. However, the details of her college life aren’t that much in the media.

Brighton has two siblings; an older sister, Saxon Sharbino, and a younger brother, Sawyer Sharbino. All Sharbino siblings share the same love for acting. Her brother Sawyer, 15, portrayed a church boy in the film Miracles from Heaven (2016).

Similarly, Saxon came into the limelight after her breakout role on the hit Fox series Touch. She gained further acclaim for portraying Kendra Bowen in the 2015 remake of Poltergeist.

She has also worked in many other successful movies and TV shows.

Brighton Has an intimate relationship with Her Family

Even after having such a busy schedule, Brighton somehow manages to spend time with her family. We can see how much the Sharbino family are supportive of one another just by glancing at her Insta account.

The actress shares a lot of pictures with her mom and dad proving they share a deep bond. She also has a great attachment to her brother and sister.

The young performer landed her first acting role appearing on the Friday Night Lights in 2008. A year after, Sharbino featured in Barney & Friends. The actress also portrayed Cammi in the hit Disney series Hannah Montana in 2010.

Sharbino continued to play roles in many other acclaimed projects including Prime Suspect (2011), The New Normal (2012), and NCIS (2013).

The actress became a familiar face among TV fans after her portrayal of Lizzie Samuels on the highly successful AMC TV series The Walking Down. It was a heartbreaking role. Nevertheless, the role really helped Brighton push her boundaries as an actress.

The young actress appeared on the show along with many other prominent actors like Andrew Lincoln and Jon Bernthal as well.

Her Other Movies and TV Roles

Sharbinon has been a part of several other successful movies and TV shows. She also appeared in True Detective and Once Upon a Time in 2014. Her other TV works are Law and Order: SVU (2017) and Zoe Valentine (2019). Besides, Sharbinon is also notable for her work in films like Growing Up Smith (2015) and Miracles from Heaver (2016). She played Tiffany Hart in a comedy-drama Bitch in 2017.

Furthermore, the actress appeared as Jojo on the TV series Players in 2020.

The actress launched her own YouTube channel on 17th March 2017. It has 132k subscribers as of 2021. She mostly uploads the videos with her brother and sister.

Sources reported Brighton Sharbinon has over $500,000 net worth as of 2021. She has earned the majority of her wealth through her movie and TV roles. Undoubtedly, the figure Brighton has held now will be in the sixth digits in the coming years by looking at her tremendous professional growth.

Her Age and Height

Other Interesting Facts about Brighton Sharbino