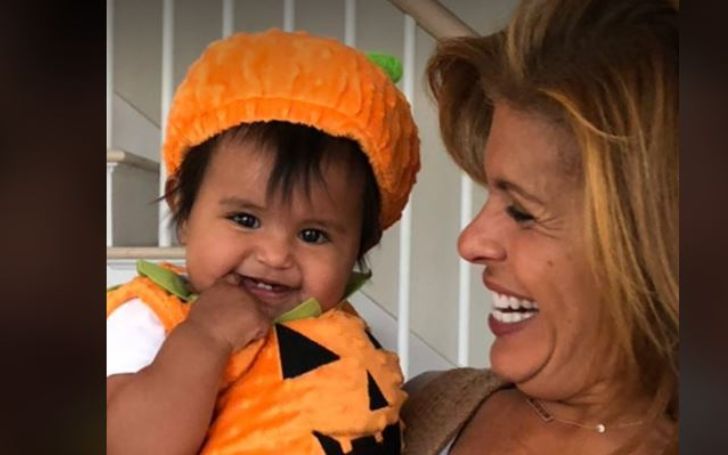 Haley Joy Kotb is the daughter of NBC Today host, Hoda Kotb. Soon she is about to reach five and ever since her debut into the life of the Gracie Award winner, Kotb says she is in awe almost every day to know how beautiful her life turned out after having Haley and her sister.

Haley is also responsible for giving Kotb her favorite role yet, says the morning show host herself. The NBC’s presenter, Hoda Kotb seldom misses the chance to spend quality time with Haley and her sister and quite nearly never skips sharing images of daughter Haley and Hope.

Take a look back at Hoda Kotb’s initial years being the mother of Haley. Also explore what the mother-daughter duo and the other piece, Hope have in store in the coming days.

The Time Hoda Welcomed Haley Joy Kotb Into Her Life

Hoda and her then-boyfriend, Joel Schiffman adopted Haley in February 2017. In October 2021 while talking to People, Hoda opened up about the life-changing moment when she first met Haley.

“I don’t even remember who was carrying her because all I could see was her,” Hoda confessed to People’s “Me Becoming Mom” podcast.

“They put her in my arms… she fit like she was born there. I looked down and these eyes were looking at me and I thought to myself, ‘Forever, for as long as I am breathing, you will be protected and loved and cared for,”

added the Virginia Tech graduate. Kotb states as soon as she held Haley, she had a feeling like her new baby was hers and hers only.

Sometime later, Hoda and her ex-partner jointly named their first child after Halley’s Comet. The one which makes an appearance once every 75 years.

“It’s once in a blue moon that something beautiful like that happens,” the Oklahoma-born correspondent explained to People. Kotb claims she and Joel were right in choosing the moniker for their first baby.

Remembering the first-ever moment she saw the face of Haley, the chief anchor said,

“Her eyes were looking right up at me, and boy, it was magic. Sometimes you wonder about what do you deserve in life? What do you deserve? When I look at her, and when I looked at her then, [I] wonder, ‘Did I get more than my share?’ I feel like I did.”

Kotb added Haley coming into her life changed everything. Hoda once revealed the year when she adopted Haley was the point where she figured out what really mattered. The now 57-year-old even wrote an essay at the end of 2017; the year, she welcomed her first daughter.

Unlike her reporter mother, Haley, who has also graced the cover of People, is not Egyptian mostly because she is not the biological child of Hoda Kotb.

While the Peabody winners’ parents are from Egypt as well as Nigeria, she is yet to reveal the exact lineage of her adoptive daughter.

Before adopting Haley, Hoda spent years thinking parenthood wasn’t in the cards for her. The Webby Award laureate, who was diagnosed with breast cancer when she was 42 years old, came out of treatment unable to conceive.

When she first decided to go for adoption, she was originally nervous to bring up the topic of adoption to her then-partner, Schiffman. Hoda nonetheless decided to have the emotional conversation.

Recalling the first sentences she had presented to Joel in regards to taking in a child, the Emmy recipient, in 2018 told Dailymail,

‘I remember when I went to speak to Joel about it… my heart was pounding. I think I was afraid of the answer, to be honest. But I knew I had to say something, I had to ask.’

Hoda said her former partner while still unaware of the decisions on her mind, knew something was up. When Kotb finally told him she wanted to pursue adoption with him, she made it clear he should feel free to take as much time as he needed to ponder that possibility.

To this, Joel’s answers were,

Kotb says she found Schiffman’s immediate commitment overwhelming. The daughter of Muslim roots refers to the moment as something of a heart-stopping instant for her.

Kotb and Joel who were about to have a wedding in 2020, however, ended their relationship in Jan 2022. Though they are no longer together, Hoda says she and her ex-partner decided to raise their two daughters together.

Haley and Hope used to live with her journalist mother and her ex-boyfriend at their apartment in Upper Manhattan. Haley’s separated parents also share a four-bedroom waterfront property on Long Island.  Amid the split, however, it is unclear where they reside mostly.

In the initial years, Hoda turned to YouTube for parenting tips as she admits she found it quite challenging handling infant Haley.

The member of the Virginia Tech Alumni Association once revealed she wasn’t even able to hold Haley properly. She likewise said not knowing anything about changing her diaper as well.

In an interview, Hoda explained the reason for her first-ever child’s luxury for two birthdays was because she wants to celebrate Haley’s being born to her in addition to her actual birth date. While the ex-WWL associate is yet to share the calendar specifics of Haley’s actual birthday, she admits to adopting her on Valentine’s day, 2017.

Kotb maintains Valentine’s Day is “extra special” in her house. She explains the day is when Haley came into her life or was born to her.

To Hoda, Feb. 14, is about more than celebrating love in her household.

“It also happens to be when we celebrate the day that Haley came into our lives,”

the TV host of Egyptian-Nigerian descent said in an interview. Kotb added the day, for her, is sort of a ‘gotcha day.’

Haley Has A Younger Sister; Might Get One More Sibling

Haley’s adoptive parents and one of the popular NBC’s faces, Hoda and her former bae, Schiffman took in her younger sister, Hope Catherine in 2019, two years after they had adopted Haley. It was also the year when Joel asked Hoda to marry him in the month of November when they were vacationing in Mexico.

Hoda, who was previously married to a tennis coach, Burzis Kanga describes her youngest daughter and Haley’s sister, Hope as “a dream child”

She says the two sisters have been best friends since day one.

“They are intertwined. They hold hands, they don’t let go and write each other notes and the teachers deliver them. I’m so blown away by the love that they share,”

the former correspondent for Dateline NBC reported of her daughters’ bond. What’s more, Hoda has stated she wants to add one more kid to the mix.

Haley and Hope’s most famous TV host mother, Hoda Kotb is one of the biggest paid personalities in the reporting and hosting world.

The New York Times best-selling author’s salary reportedly is in the region of over $8million on top of a net worth sitting at around $30million.

That though shouldn’t be surprising considering the ‘Today’ show stars often make headlines for penning multimillion-dollar contracts to report.

To have a bit of a perspective, Hoda’s predecessor, Matt Lauer had been pulling in an estimated $28 million a year, and he’s also valued at $80 million.