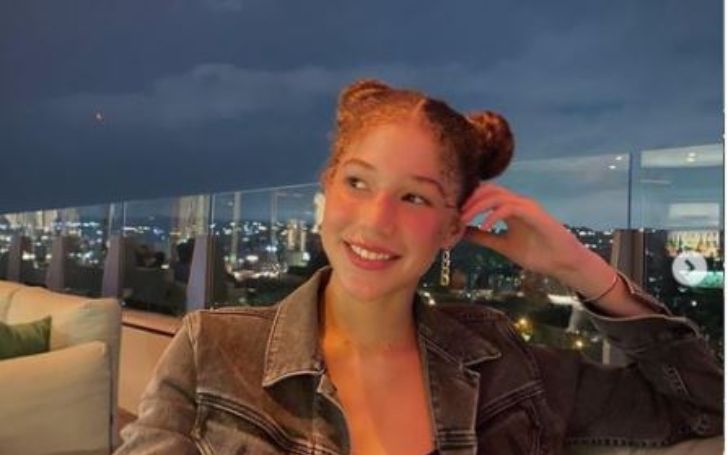 Isabella Strahan is a high school athlete and an emerging model who is best known as the daughter of Good Morning America co-host and ex-NFL player, Michael Strahan, and his former wife, Jean Muggli.

The offspring of an African-American father and a white mother, Isabella, on the appearance is intriguing enough. What adds more to her ambiance is her forever cherry red complexion and the gorgeous corkscrew-like curls.

Read more about her in the headings that are to follow; get to know comprehensive details narrating the to date chapters of Isabella Strahan’s life ranging from her parental backgrounds to even her boyfriends and beyond.

Isabella Strahan Was Born In The Mid 2000s

Michael and Jean’s daughter, Isabella Strahan was born in Oct 2004.

Her mother’s family hails from Carson, North Dakota. Through her father, she is the granddaughter of Louise (Traylor) Strahan, a basketball coach, and Gene Willie Strahan, a retired Army Major and a boxer with a 1–1 record against future heavyweight Ken Norton.

She currently studies at Convent of the Sacred Heart, Willmington, North Carolina.  Before that, she had a provision for homeschooling.

Isabella Strahan Parents, Jean, And Michael Met At A Salon

Isabella’s parents, Jean Muggli and Michael Strahan first encountered each other at a skincare salon in 1994 in Manhattan, New York. Jean at the time was the salon’s employee.

Once after seeing her, the TV host made frequent visits. They eventually started a relationship and in July 1999 they became husband and wife. And it was five years later, in 2004 that they welcomed their fraternal twins, Isabella and Sophia; the former being two minutes older.

Muggli and Strahan divorced each other in 2006. They, though, didn’t part on good terms with Isabella’s mother accusing Michael of infidelity, physical abuse, negligence, and such. She however later retracted the domestic assault claim.

Even until recently Michael and Jean would confront each other in court.

Did Isabella’s Mother Really Abuse Her And Her Sister?

In early 2020, Isabella’s father, Michael filed a case against his ex-wife, Jean claiming she abused the now 17-year-olds, Isabella and her twin sister, Sophia, physically and mentally.

As per the then court documents, Jean “physically and emotionally” abused the couple’s teenage daughters. The space tourist said his second ex-wife, had been engaging in a “pattern of abusive conduct towards the children for years.” He added how he was going to provide proof of the physical and emotional abuse.

In addition, the one time NFL athlete complained the North Dakota native mother of Isabella and Sophia exhausted their daughters and forbade them from attending court therapy sessions, volleyball practices, and equestrian events.

The former Superbowl champion also said how she at one time seized the girls’ passports and not them let go to the European vacation with their father.

What Jean said to all the aforesaid allegations never made it to the outsiders’ knowledge though she reportedly filed her own complaint against Isabella and Sophia’s father. She said her former husband hired someone to watch her 24*7 in her homes in North Carolina which Michael denied.

Eventually, in Nov 2020, the biological parents of the twins settled their dispute but the court kept the conditions under the wraps. And as for the present, Jean’s relationship with Isabella and Sophia is seemingly fine as certain media and people alike have been seeing them jointly attending promotional events as well as casual hangouts.

With the exception of Soph, Isabella also has two more siblings though not from the same mother.

Her step-siblings, Tanita and Michael Anthony Jr. are her father’s children from his first ex-wife, Wanda Hutchins. Tanita is a visual artist while Michael Anthony is a psychology graduate from the University Of Texas.

As per Michael himself, Isabella and Sophia are extremely close with their half-siblings.

Isabella’s womb mate, on the other hand, is an equestrian. In fact, the look-alike sisters started horse riding at the same time but the older kin would later move to sports.

She Has Also Modeled

When her parents were still battling it out on the court over their custody, Isabella and her sister, Sophia, who mostly live with their mother, enjoyed their first modeling gig.

And it was for the KB Swim. The twin sister had posted several behind-the-scenes snaps from their shoot with the swimsuit company.

Isabella Strahan Is A Volleyball Player

Turns out there is another sports star in the Michael Strahan family who is as athletic as the former Lombardi Cup winner.

And she is none other than one of his twin girls, Isabella Strahan. The other Strahan twin is currently a high school volleyball player for NC Coastal Volleyball Club, Willmington North Carolina. She plays as a middle hitter/blocker or as a setter and is a right-hand user.

With NC Coastal, Isabella who sports Jersey no 13, finished 2nd at the Carolina Region Tournament in January 2022. The team also finished 17th at the Winter Bump held from Jan 19, 20, 21, the same year.

As per some reports, before NC Coastal, Isabella, when in ninth grade, used to play for Cape Fear Academy, also a team in Wilmington NC, 19-20 Varsity Volleyball. When in Cape Fear Academy, she ranked 11947th nationally and 484th in North Carolina.  During those periods, she wore Jersey #18.

She Is Quite Tall For Her Age

The other twin daughter of the seven-time pro-bowl winner is impressively tall. At 5’11”, Isabella even stands out among her volleyball team member and she is just 17.

She’s just a few inches shorter than her father who himself towers over six-foot-five-inches. Isabella’s forehead reaches just about the cheek level of her retired athlete father.

Once Isabella and her sister grew older, their father, Michael revealed it wasn’t easy for him in addition to his and Jean’s twins.

With Esquire in Feb 2016, Michael admitted the first few years of his youngest children’s lives were difficult. He said it was challenging to learn about Isabella and Sophia because their moods constantly shifted, and one would be the polar opposite of the other.

However, after several years, the 1993 round 2 draftee says he had started to realize the differences in both Sophia and Isabella and how their personalities were. It ultimately helped him adjust to being a dad and ensuring he could provide for both of their needs.

Does Isabella Strahan Have A Boyfriend?

Whether, Michael’s ever-growing beautiful girl, Isabella has a boyfriend or is largely single is a question that has been slowly starting to get momentum among the masses.

And this might be, to a significant extent, because of the soaring number of followers she has gained over the last few years on her Instagram and other such platforms. While she seemingly loves sharing snapshots of hers in a bathing suit, pictures of her sisters, father, and others, Isabella is yet to share what the romantic facet of her life resembles.

Accordingly, it’s all up to the guesswork and supposition regarding the significant other of Isabella Strahan.

Her Father Is Ultra-Rich

With a net worth of 85 million dollars, Isabella’s father certainly comes into the category of super riches. It naturally also means his twin daughters and even his other children have a pretty strong safety net if things go south money-wise.

What cannot be missed while mentioning the former defensive end’s wealth are his $17 million LA house, $16 million Brentwood manor, and a $2.25 million NYC Loft. Not to mention, Micahel also has his own line of clothing and other business avenues.

What’s more, Isabella and her sister also have the luxury access to a private jet again thanks to her multimillionaire father.