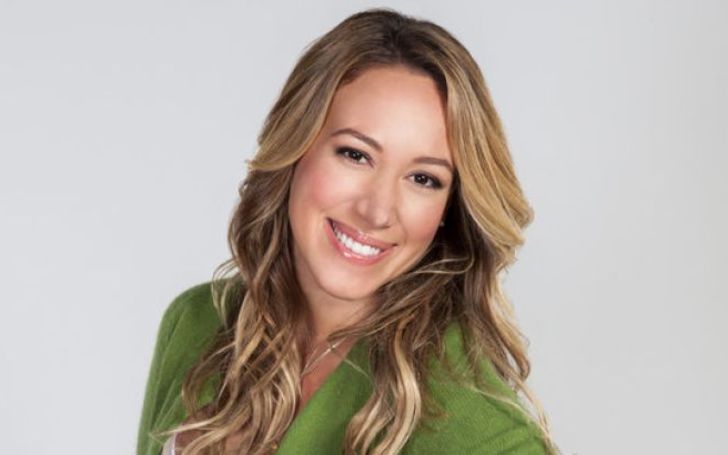 Haylie’s mother is a film producer and has produced movies like The Perfect Man (2005) and Material Girls (2006), and also worked as the co-executive producer of A Cinderella Story (2004).

The family currently lives in Houston, primarily with a motive to manage their business.

Hilary and Haylie Duff Are Siblings

Hilary Duff is the younger sister of Haylie. Like Haylie, Hilary is also an actress and has appeared in many films including Agent Cody Banks (2003), Cheaper by the Dozen (2003).

The Duff sisters have also worked together in a couple of projects including the 2006 film Material Girls where Hilary played Tanzie Marchetta and Haylie portrayed the character named Ava Marchetta.

Besides, when Hilary was still a six years old kid, she was cast along with Haylie in The Nutcracker Suite under a BalletMet Columbus’ production, in San Antonio.

Haylie is an Inspiration for Hilary

As sisters, Haylie and Hilary share a great bond. In fact, Hilary calls her sister her inspiration. The 32 years old claimed that she was inspired to become an actor because of her sister and even learned ballet because Haylie joined the ballet class. She said,

“I always wanted to be like my older sister, Haylie,”

“When she learned to ride a bike, I had to as well. If she took ballet lessons, I did too. I took singing lessons because she did. It all just got more intense until it turned into careers for both of us.”

No doubt the sisters look adorable together.

Talking of Haylie’s education, Haylie was homeschooled by her mother until she turned eight. Later, she joined Harvard Extension School, after which she finished her higher education at Harvard University.

Haylie Duff Movies & TV Works: Made Her Film Debut in 1997

Haylie professionally made her entry into the world of movies in the 1997 film Hope, where she portrayed the character named Martha Jean Pruitt.

Following this, she appeared in Addams Family Reunion (1998), Dreams in the Attic (2000), The Lizzie McGuire Movie (2003), and many other prominent roles.

Material Girls is considered one of her successful films where she appeared with her sister Hilary. Meanwhile, their mother produced the movie.

Haylie has also appeared on numerous TV shows besides her extensive career in film. She made her first appearance on television as a guest in True Women in 1997. Likewise, she also appeared in guest roles in The Amanda Show, Chicago Hope, and a few others before she gained fame as Amy Sanders in Lizzie McGuire.

Since 2016, she is the active cast on her self-titled TV program Haylie’s America.

Like we have mentioned, Haylie is also a singer and songwriter. Her first venture as a singer was in 2004 music album A Cinderella Story, where she sang a single titled Our Lips Are Sealed, along with her sister Hilary.

Similarly, she sang On the Rise Again from the 2008 album Half a Klip, also featuring Kool G Rap.

Well, talking about her engagement, Haylie stated that her husband-to-be Matt proposed to her on April fool’s day but that the proposal was not a joke.

Haylie revealed the news on her food blog, The Real Girl’s Kitchen, where she wrote,

“This week has seriously just become the best week of my life! As if announcing The Real Girl’s Kitchen tv show wasn’t enough, Matt just took me by total surprise and proposed…on April Fool’s Day of all days! The moment was genuine and sweet (like him!) and I couldn’t wait to say yes!”

Haylie is the Mother to Two Children With Matt

The 36 years old has two kids with Rosenberg. She announced her pregnancy with her first daughter Ryan Ava Erhard in 2014 and welcomed her in May 2015.

Their second child Lulu Gray was born on 5th June 2018. The new mother Haylie’s Instagram is filled with adorable photos of their daughter.

Has a picnic in the back of our golf cart today. By the beach. Pretty great. ❤️ So grateful for some of these fun memories from this crazy time.

Haylie and her fiance Matt just celebrated their second daughter, Lulu’s birthday on 5th June. Sharing a snap of the happy family from their celebration, the actress wrote “My baby turned two today! 💖 Thank you to everyone who made her day so special!” Here is the post.

Wedding Plans: Are Haylie and Matt Getting Married?

As far as the wedding is concerned, Matt and Haylie are not considering getting married at least until the pandemic ends.

In their recent conversation with US Magazine, the actress clearly mentioned that she would love to have Matt as a husband but that it was not the right time. She said,

“We’re busy with both of the kids and jobs, and we always say. We will at some point,’ and then life continues to be busy, and we still really like each other, which is good, I guess, At some point, we will, but certainly now is not the time to have a wedding.”

Also, the couple who are waiting to tie the knot for a long time seems to have some lavish plan in mind. Stating the reason they were not opting to get married during the pandemic, she said,

You couldn’t have many people there, could you?

While Haylie is all set to get married to Rosenberg, she had a few relationships in the past.

Prior to Matt, Haylie was in a relationship with What I Like About You actor Nick Zano. They had reportedly begun dating in 2008 and separated in 2011.

While they never confirmed their relationship, they were spotted together on numerous occasions including at AFI FEST 2007 presented by Audi. The event was held on November 5, 2007, in Hollywood, California, at ArcLight Cinemas.

As of 2020, Charlie is in a romantic relationship with actress Lily Collins.

She Has a Net Worth of $4 Million

As of 2021, Haylie has a net worth of $4 million, according to Celebrity Net Worth. While her movie and TV career is a major source of her income, she also makes a decent income from her career as a fashion designer.