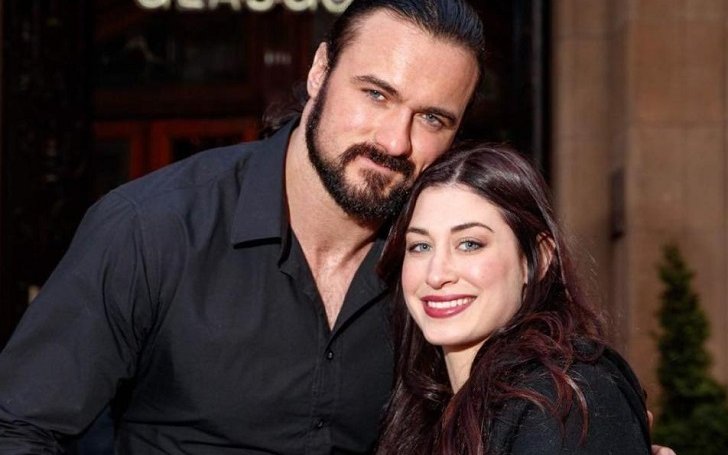 Kaitlyn Frohnapfel came into the spotlight as the wife of renowned wrestler Drew McIntyre, the winner of the 2020 Men’s Royal Rumble. Her husband McIntyre is also a one-time WWE and NXT Champion. As for their love life, the duo has been happily married for over four years.

Besides, Kaitlyn, 29, is a trainee doctor by profession who previously worked as a fitness trainer. She is also an erstwhile college athlete.

Let’s explore further about her professional and personal life.

Where is Kaitlyn Frohnapfel From? Her Parents and Siblings

Kaitlyn was born on 31st December 1991, in Largo, the third-largest city in Florida. She is the daughter of Wendy. Back in May 2021, Valerie Bogle, a photographer posted the adorable mother and daughter shot on her Instagram.

As per the sources, Kaitlyn has a sibling, a sister, however, the name of her sista is not revealed.

Education: Is A University of South Florida Graduate

Kaitlyn spent the majority of her childhood in Largo and attended the local Largo High School. Upon her graduation, Frohnapfel enrolled at the University of South Florida and obtained a degree in medicine.

Was an Accomplished Athlete At School Too

Kaitlyn was a fitness enthusiast from a young age that also led her to embark on the opportunity of track & field at school. Gradually, her exceptional athletic ability also earned her a spot in the Packers, a famous athletic team in Florida.

Shortly after her graduation from the University of South Florida, Frohnapfel started working as a trainee doctor in the United States.

Unlike her husband Drew’s career, the details of Kaitlyn’s professional life are hidden from the media. But it is quite interesting to know how the then-college athlete switched her entire focus on the medical field.

Kaitlyn and her hubby Drew got married on 12th December 2016. Mclntyre announced the big news, posting a stunning wedding photo of themselves on Instagram. He captioned the snap, “Married my real tag partner & the one who channelled all that potential everyone has always spoke about in work & life in the right direction #FlawlessVictory #Hitched #LoveYou”

Talking about their wedding venue, it took place in Saint Petersburg, Florida. The lovebirds were surrounded by their family members and close friends.

Meanwhile, many online tabloids have mentioned Frohnapfel and Drew tied the knot on the 9th or 10th of December, however, their exact wedding date is 12 December 2016.

On 12th Dec 2017, McIntyre even wished his wife on their first wedding anniversary, which further verifies their marriage date.

The beautiful couple enjoys a blissful married life for over three years. They have been in a relationship since late 2015. The husband and wife don’t have any children as of yet.

When Did They Meet First?

There have been several speculations on when Kaitlyn Frohnapfel met her husband, Drew McIntyre, for the first time. However, none of them has ever shared about how they came across for the first time. Believing the online tabloids, we can say that Kaitlyn met wrestler Drew in 2015, and they started dating shortly after their meeting.

Less than a year after Kaitlyn and Drew started dating, the WWE star proposed to his then-girlfriend to be his wife in February 2016. On 17th Feb 2016, Drew took to his Instagram to announce their engagement, where the wrestler shared a photo showing off the sparkly engagement ring on Frohnapfel’s finger.

In the picture, the couple is seen flying over a desert in a helicopter as Kaitlyn shows off the big rock on her finger. Drew had proposed to his girlfriend, Frohnapfel, in Las Vegas.

They Both are Cat Lover

Frohnapfel and McIntyre love animals. Drew has two cats named Chaz and Hunter. Kaitlyn doesn’t have her own pet, however, the doctor often flaunts her love for the two pets on her social media handles.

He joined the Frontier Wrestling Alliance’s Academy at age 15 to shape up his prowess.

Drew spent six-year (2001-07) performing outside of WWE before making an official WWE debut on 12 October 2007. He is now the WWE Champion and has also won several other major titles, including Intercontinental Championship and two WWE (Raw) Tag Team Championships.

The couple walked down the aisle in May 2010 in Las Vegas. They became engaged in July 2009, nearly a year before their nuptials. Their relationship, however, lasted for a short period as they announced their divorce on 24 May 2011.

What is Kaitlyn Frohnapfel Net Worth?

As per estimation made by various reliable online sources, Kaitlyn’s net worth is $300,000 in 2021. She is a trainee doctor by profession.

On the other side, her spouse, Drew McIntyre, makes quite a good fortune from his career as a wrestler. According to TheRichest, Drew has a fortune of $550,000.

Kaitlyn is active on Facebook with hundreds of followers. On the other hand, her hubby is also an avid social media user who has over 1.3 million followers on Instagram.