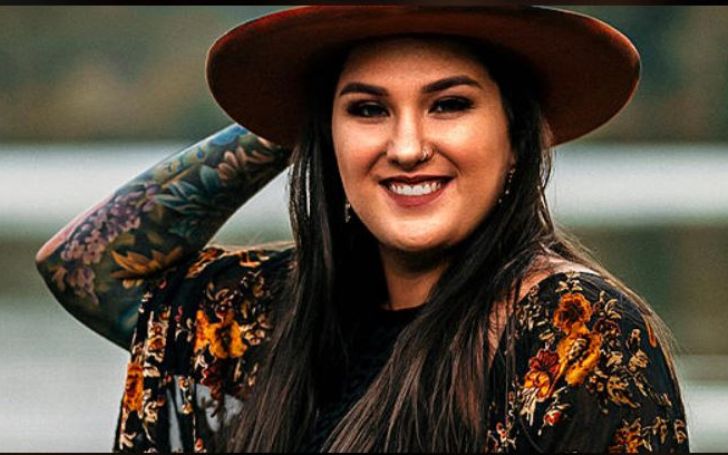 Allie Colleen Brooks is one of the three daughters of the country music star, Garth Brooks (No Fences, Ropin’ The World, etc), and his ex-wife, Sandy Mahl. The girls are all grown up and chasing their own dreams.

Though Allie’s the only one following in her father’s footsteps and is a rising country singer-songwriter. She may be the daughter of country music legend Garth Brooks, but when it comes to her own music career, she’s carving a path uniquely her own.

Over the last five years or so, people have come to know her as someone who delivers her own brand of authenticity and depth through honest lyrics and soulful vocals. Allie’s songs carry a believability — whether happy, hopeful, angry, or sad.

Quite obvious is Allie is no stranger to the music industry. But what it is that makes her stand out from her father’s legendary legacy. Analyze them in the write-up below. Along the way also know about her journey to the country genre, how she is doing in the present, her married life, and more.

She grew up in Owasso, Oklahoma. Allie went to a small Christian school in Oklahoma and when in fourth grade she sang in Chapel.

She graduated from Nashville’s Belmont University with a degree in Songwriting and Music Business. At her father’s request, Allie promised him not to pursue music until she finished college. She later became the only daughter of Garth to follow the music. The brunette considers Ashley McBryde as her musical idol.

The daughter of the In Pieces singer has been performing since she was 14 years of age and has been on the road since graduating in 2018.

And while she did have the option to take advantage of her established father’s connections to ease her way through the country music, the now 25-year-old opt not to do that.

Talking about creating her own path in the music, Allie once told American Songwriter,

Allie decided from a young age she didn’t want to get by on her family’s accolades.

This she thought after one of her schoolmates’ parents made her realize how she was always going to have an edge to make it into the music since she was already a child of a famous musician.

Alli’s biological parents though would separate in March 1999 finalizing their divorce in 2001. After divorcing her mother, Mahl, Garth married another woman, Trisha Yearwood on December 10, 2005. And apparently, Allie has a remarkably good relationship with her stepmother, Yearwood.

Her elder sister, August Anna Brooks Russell became a mother to a daughter, Karalynn at 19.

She also has another daughter named Gwendolyn. Allie’s other sister, Taylor Mayne Pearl Brooks is a former history student of Oklahoma State University. Although not much about her is known be it her professional or marital life, she once helped out her family during a 2019 Habitat for Humanity build.

Allie’s sister, Taylor when reported in Jan 2022, was reportedly in seminary school at Vanderbilt University and was pursuing the Master’s program in Theological Studies.

Way before releasing her first album, Allie had graced listeners with singles including “Along the Way” and her debut song, “Work in Progress,” as well as a cover of her dad’s “She’s Every Woman” that emerged in 2017.

Her songs first used to run on the nationally syndicated Bobby Bones Show. Additionally a 2016 video of her singing a tune called “Close Enough” has garnered more than 750k views on YouTube.

She has also appeared and performed in several radio station studios (most notably, the Bobby Bones Show) and released three songs of her own, plus many covers. She scored her first No. 1 country hit with the soaring ode “Ain’t the Only Hell (My Momma Raised)” in Oct 2020.

Playing House was the lead single off her 11-track debut album. Allie once described the songs from her first collection were “such a cool progression of me.”

Ms. Colleen co-wrote all of the 11 songs on her debut disc, with the exception of “Blame it on the Weather.” That one, the Owasso native wrote alone.

Prior to making Stones available, she had released a few other songs, including “Best Friend” and “Road You Take.” For her first albums, Allie’s co-writers were Dallas Remington, Scott Barrier, Cyndi Limbaugh Torres, and Melissa Bollea.

The couple got engaged on the occasion of the Oklahoma-born artist’s 21st birthday in 2017. The day Allie and Roberts were attending Mr. Garth’s concerts; the father made sure to make the night a special one for her, leading the crowd in a “Happy Birthday” sing-along in honor of his baby girl.

As the AMA winner was singing his romantic hit She’s Every Woman, Allie and Jonathan were watching from backstage. While the song was still going on, Jonathan asked Allie to marry him.

The fiance then shared a video of the proposal on Facebook though the video is now lost. Allie and Jonathan tied the knot the following year in October 2018.

They had their wedding on her Garth’s estate in a chapel that the Double Live singer had built specifically for them. Taking to Instagram, the Playing House songstress shared a snapshot of her and Jonathan’s dog, Eve.

“My day was perfect. This is all ya get for now…”

Allie wrote in the caption to the photo. She as of present reportedly resides in Nashville, TN, and has over 10 concerts scheduled for the year 2022.

Allie Has Deleted All Of Her Wedding Pictures From Her Socials; Are Allie Colleen And Roberts Still Married?

While no such substantiation or even a suspicion of the Stones singer Allie Brooks and her husband’s separation is in the exchange of views, the former has apparently deleted all of her and Roberts’ wedding pictures.

Further, there are literally zero posts or mentions of Roberts on Allie’s socials to any extent whatsoever. This has led some to believe if the couple is already done for, though, the speculations are yet to have any credible assessments.

Garth Brooks Is Extremely Rich; What Is Allie Brooks Net Worth?

Colleen’s father, Garth Brooks is supremely rich with his net worth standing through the roof at around $400 million.

The number, however, is a combined fortune between Brooks and his wife, Trisha Yearwood. The majority of the couple’s money comes from Garth’s career from which he has allegedly raked in $300 to $350 million.

And considering his achievements, that shouldn’t come as that much of a subject of a debate; the 60-year-old country artist has six albums that are certified diamond.

Colleen’s father in addition has sold more than 200 million albums worldwide, making him one of the most successful and popular performers in history. He further is the best-selling solo album artist in the United States with 148 million domestic units sold, ahead of Elvis Presley.

What’s more, at times, Brooks made records as one of the highest-paid touring performers grossing a yearly salary of $90 million. The singer additionally is also a real estate owner in several major cities, such as Tulsa, OK, Nashville, TN, and Malibu, CA.

On the other hand, his daughter, Allie albeit a promising singer has a long way to go before she starts to pull in money as big as her father’s. Given that Colleen has just started to make a name in the music industry it might a little unfair to go and begin assessing her net worth, to say the least.

In any case, to gout on a limb and assume her net worth nonetheless it should be pretty safe to say Allie could be worth anywhere from tens of thousands to hundreds of thousands of dollars.

The most apparent difference between dad and daughter is that Allie’s arms are full of tattoos.

In fact, the Vagabond singer once revealed it took nearly 60 hours to finish her sleeves, and she’s got 15 more tattoos beyond that. Colleen once told her inks – tell random pieces of her story, from her days growing up in Oklahoma to her time performing at honkytonks up and down the streets of Nashville.

The rising country artist has covered her arms full-blown. The standout is a large dragonfly on her throat.

She Also Made Her Father Get A Tattoo Through A Bet

While Allie Collen Brooks has a ton of tattoos throughout her body, Garth wasn’t a fan of putting ink on his body for ages. In Feb 2022, Mr. Brooks, however, agreed to go for it because of a promise he made to his daughter, Allie.

The Hits singer said he owed his youngest a tattoo during one of his weekly Facebook Live videos. Garth, however, did not provide any details about the promise, nor if it was actually a bet he made with his youngest daughter.

Is Julia Robert’s Daughter Hazel Moder An Actor? Everything About Her