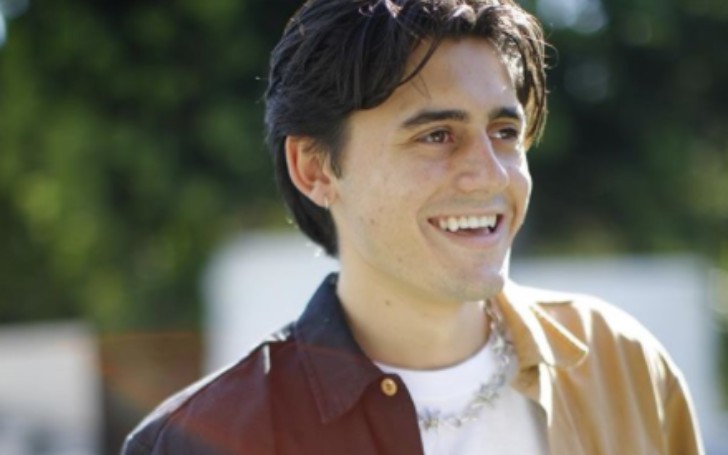 American actor Isaak Presley has become a household name in the field of entertainment. Starting out as a child actor, Isaak won the hearts of everyone because of his exceptional acting skills.

Hailing from Los Angeles, California, the actor was most recently in a relationship with dancer Mackenzie Ziegler. Now the question here is, Is Isaak Presley’s girlfriend Mackenzie, still with him? If not, then who is he dating now?

Let’s find out all about Isaak’s relationships.

Who is Isaak Presley Girlfriend? Who is he dating in 2020?

Celebrities these days tend to keep things a bit close to their chest due to some mainstream media. Thankfully, Isaak isn’t bothered by them as the actor is open about his relationship status.

At the moment, Isaak is single. Yes, good news for you ladies as the gorgeous actor with beautiful eyes is not dating anyone. We’re sure many of you might still be thinking Isaak is dating Mackenzie but sorry to burst your bubbles. They have officially broken -up.

In addition, since calling it quits with Mackenzie, it looks like Isaak will tread off of the committed relationship path for some time now.

Isaak Presley and Mackenzie Ziegler: Details on their relationship

Isaak might be single but just a few months ago, he was in a relationship with actress, Mackenzie. You might be wondering when did the couple first start dating? Well, the duo first confirmed their relationship back in August 2019.

The New Normal star and Makenzie initially started out as friends but soon their friendship took off and fans began to notice.

Before Isaak and Kenzie made their romance official, we all had a slight idea. The lovebirds used to hang out a lot which gave rise to the speculation that something is cooking between the teenagers. And as we all know, ‘Public Knows Best’ fans were right after all.

Isaak shared a picture with his sweetheart in August 2019 with a loved-up emoji. Soon thousands of fans started commenting on the post stating they are definitely an item. The actor himself confirmed it by giving his reply on a few of his fan’s comments.

In addition to the fans, Mackenzie also commented on the post with heart emojis to which our handsome actor replied, ‘Bb’ alongside a heart emoji.

Since announcing their relationship, the couple seemed so happy and cute together. They were literally an epitome of relationship goals for many out there. But their lovey-dovey soon started fizzling out and it started when Isaak was accused of cheating on her.

Why did Isaak broke-up with Kenzie? They were not in the right mental state

After dating for several months, Isaak and Kenzie decided to call it quits. They officially broke up in May of 2020. The teenage couple’s romance didn’t even reach the 1st-anniversary mark.

It was Kenzie who first broke the news of their separation. In a live Q&A session with her fans, the Dance Moms star revealed she and Isaak have called it quits.

Going by the video, the reason behind their separation was their mental state. However, fans claimed Isaak’s move to The Clubhouse in April 2020, a house full of popular internet celebs, also added to their split.

Despite going their separate ways, Isaak and Kenzie still share a cordial relationship.

In addition, many fans also stated that Isaak cheated on his girlfriend Kenzie with one of the house The Clubhouse members. Did you know, Isaak was also accused of infidelity in early 2020 as well?

Isaak was once accused of Cheating on Kenzie

We all know, that every relationship has its ups and downs, however, cheating shouldn’t be considered either up or down. In early 2020, there were rumors that Isaak cheated on his girlfriend.

At first, cheating rumors came when YouTuber Nicolette Gray uploaded a video wherein one of her friends Cole talked about a time when she and one another friend invited a “guy” over to their residence.

Reportedly, the guy in question was a Disney star. Apparently, before hooking up, he told the girls that he is single.  But, Cole and her friend later found out that the guy is indeed in a very public relationship.

Take a look at the full video!

As soon as the video went up, Kenzie showed support towards her boyfriend. She even claimed the news is nothing but lies. She shared an Instagram story in which she directly addressed the rumors and said,

“This story is absolutely disgusting. If you know Isaak you know he would never do this. We are very happy. Also I’M  W HIM EVERYDAY!!!! If i’m not w him we’re calling each other. none of this adds up. no one hate on Isaak bc he did absolutely nothing.”

Besides, Isaak also said on his Instagram, “People rlly strive to ruin other people’s happiness.”

Though Kenzie and Isaak both spoke against the claims, many of Kenzie’s fans believed Isaak really cheated on her.

We all know how the majority of the celebs tend to have multiple affairs before they settle down for good with their wife or husband. Same thing for Isaak as well.

Prior to his current relationship, he has been linked with several actresses. Firstly, he was rumored to be dating his Stuck In The Middle co-star, Jenna Ortega.

Due to their chemistry off the screen, there were wide speculations that the lovebirds are in fact an item. It was never confirmed. Likewise, Jenna also claimed she never dated any of the men the internet claimed her to be.

He was also linked with the model, Andora Leigh. Rumors of their affair started swirling around back in 2017 after the two posted some PDA-packed pictures of each other on their respective social media handle.

On the other hand, Presley’s ex-girlfriend, Mackenzie also has her share of dating affairs in the past. At first, she was linked with the Canadian singer-songwriter, Johhny Orlando. The Dancing Mons star even went on a world tour together which even furthered their relationships.

Later on, she was rumored to be going out with Hayden Summerall. Their affair came to the public eye after multiple sources spotted them sharing a kiss.

Isaak Presley Family: Is he related to Elvis Presley?

With the surname matched with one of the greatest Pop singers, Elvis Presley, it is only natural that people will be curious to find if you are related to Elvis or not?

For starters, he is not related to Elvis Presley.

Meanwhile, Isaak has been brought up by his father, Lou Presley. In a candid interview, he has mentioned how his father raised him as a single parent his entire life.

Isaak’s dad Lou opted for surrogacy and a surrogate mother gave birth to Isaak. Lou hails from Cuba because of which Isaak also learned the Latino culture and speaks Spanish.

Isaak also belongs to mixed ethnicity as his dad is a Cuban. He is a Cuban-American.

For more Entertainment gossips from the celebrity world, make sure to follow CelebSuburb!!!