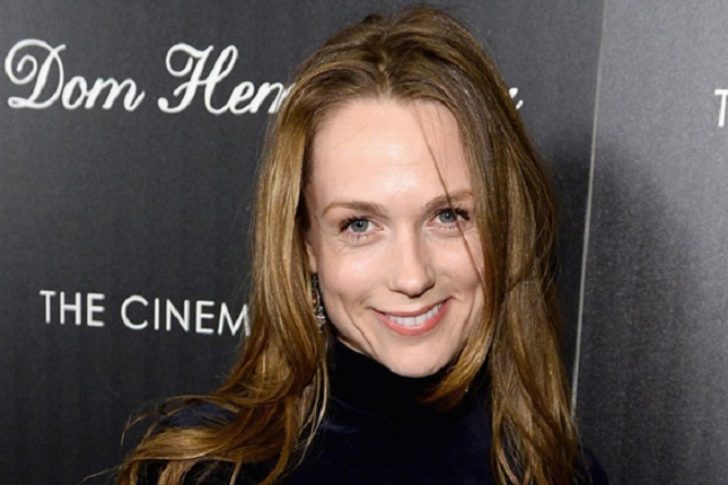 Kerry Condon is one of the prominent faces belong to the entertainment industry. The Irish actress first came in the limelight following her breakout role Octavia of the Julii, the elder sister of the first Roman Emperor, Augustus in the acclaimed HBO/BBC historical drama Rome. Her career further revitalized with a role in AMC’s Better Call Saul.

Is Kerry Condon Married? Who is Her Husband?

Kerry Condon is never married, neither ever talked about her plan to tie the knot in the near future. The actress has remained tight-lipped about her love life and relationship.

Despite her years-long journey in the industry, Condon has yet to speak a single word about who is her boyfriend. As of 2021, sources say that Kerry is not dating anyone.

The Better Call Saul actress, Kelly openly talked about how unfazed she is when it comes to never get married or becoming a mother. She told RTE Guide,

What’s more, she also maintained that she has plenty of things on her plate right now. There are many things she wants to experience and achieve in life. She stated,

“There’s loads of things I’ve planned for my life. So I’ve gone on and made plans for my life regardless of those things happening to me.”

Well, Kerry certainly isn’t worried about anything and marriage seems the last thing on her card, for now. It seems Condon doesn’t have any plan to get married in the near future but wants to lead a happy single life.

Condon once dated a Boyfriend who belonged to a different fraternity

Back in March 2012, in an interview with the Independent.IE, Condon mentioned something about a guy she has been dating for some time. She divulged her then-boyfriend belongs to a different line of work which is just the way she wants. She said,

I’m seeing a guy now who has nothing to do with films. It’s so much nicer with somebody who isn’t an actor. Two crazy people in one house would be too much. It’s better there’s one crazy person, and one nice person who looks after that crazy person

Going by her statement, it is safe to say, Condon wants to be in a relationship with someone who isn’t from the entertainment world.

Kerry Condon Parents: Grew Up in Her Father’s Horse Farm

She was born in Tipperary, Ireland, on 4th Jan 1983 to Irish parents. She grew up riding horses in her hometown of Tipperary where her father worked as a horse breeder. One of her cousins Richard is also a professional jockey.

While talking about her childhood and her love for horse riding, Condon once told Vulture.

I’m used to riding horses. My father used to breed horses when I was a child. I grew up in Tipperary, in the country, and lots of people have horses there. If my parents hadn’t been in the business, we would have them anyway, as pets. And my cousin Richard is a jockey

Kerry is from Irish ethnical background and holds Irish nationality.

Kerry Condon spending the majority of childhood playing with horses also showcased her skill in the cinema. She took the role of Irish jockey, Rosie Shanahan in the 2012 TV series Luck.

She is a devout Animal Rights Campaigner

Kerry Condon also supports many animal-related charitable causes that aim to safeguard stray animals. She likewise helps to raise funds for the People for the Ethical Treatment of Animals (PETA), an animal rights non-profit organization.

The actress landed her first acting gig with a 1999 movie Angela’s Ashes. The same year, she went on to make her TV debut playing Mairead Reilly on the BBC’s drama Ballykissangel.

Rise to Stardom with ‘Rome’

After dozens of roles in both movies and TV shows, Kerry Condon made a big break in the industry with her charismatic performance in the HBO/BBC historical series Rome.

The actress portrayed Octavia of the Julii, the elder sister of the first Roman Emperor, Augustus in the series (2005-07). The show also won a number of prestigious accolades including four Emmy Awards.

Kerry Condon initially performed in various theatrical productions. Her portrayal of Ophelia in a Royal Shakespeare Company‘s longest play Hamlet brought her huge fame in 2006. She also became the youngest actress to ever play that character for the company.

In 2009, the actress gave another breakout performance in Martin McDonagh’s play The Cripple of Inishmaan. Kerry also received a Lucille Lortel Award and a Drama Desk Award for her role in the project.

The versatile performer has been gracing with her delightful performance since 1999 with a wide range of roles. One of those, Condon also landed a role in one of the most-viewed AMC’s TV series, The Walking Dead. She played Clara in three episodes of the series (2013-14).

Kerry appeared in the project alongside some prominent faces like Andrew Lincoln, Jon Bernthal, and more.

Kerry now appears in the smash-hit AMC‘s crime drama series Better Call Saul. She joined the series in 2015 with the role of Stacey Ehrmantraut, a daughter of former police officer Mike Ehrmantraut (played by Jonathan Banks).

The actress was an elite cast member of the show. She appeared in the series alongside Daniel Spenser Levine, Michael Mando, Rhea Seehorn, Tony Dalton, and others.

Other Film and TV Roles

Besides, Condon has also been a part of many other wide arrays of movies and TV shows. In 2013, the actress grabbed the role of Melody in Dom Hemingway.

In 2019, Kerry appeared in the film Dreamland. The same year, she played Molly Sullivan in the crime drama, Ray Donovan.

Is a Dog Lover

Condon is a strong animal activist and is also a dog person. The actress is a mother of two dogs whom she adopted from the streets of Los Angeles. She often shares photos with her puppies on her Insta which has over 5.8k followers (as of 2021).

I miss my babies!! That’s the downside of being an actress, you’re always travelling for work and alone a lot.

As per some sources, Kerry Condon’s net worth stands at $1 million in 2021. The actress has collected the major portion of her wealth from her work in movies and Tv shows.

As for her property, the actress owns a house in Los Angeles, which is also her primary residence.