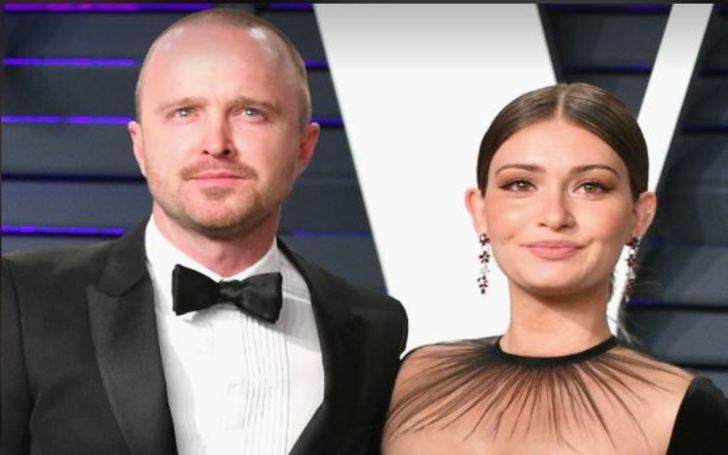 Lauren Parsekian is the wife of the Breaking Bad actor, Aaron Paul. Parsekian is a documentary filmmaker and an activist who runs her own non-profit organization for girls. Paul and Parsekian have been together for nearly a decade.

While Aaron Paul is best known for portraying Jesse Pinkman in the highly-successful TV series Breaking Bad, he is also known for frequently talking and admiring his partner, Lauren. In fact, the actor talks about her all the time.

Even so, there is little to none when it comes to her life prior to meeting the actor. So know mostly what she is besides being the wife of Paul, what she does professionally, and an uncut version of her personal aspects.

Lauren Parsekian Is A Californian

Parsekian was born on December 8, 1986 (age 34 years), in Orange County, California. Her mother, Debry Kelly, worked in some movies, including 1985’s Hot Resort, where she met Parsekian’s dad Thomas. Her mother also appeared in Prizzi’s Honor and Chips. Lauren’s father, Thomas worked with Debry in Hot Resort and also appeared in Club Life and Fame.

Parsekian studied at Pepperdine University graduating with degrees in Film and Television production.

Paul’s wife, Parsekian is also an anti-bullying activist and founder of the Kind Campaign, a non-profit organization that helps girls bullied by other girls. In 2011, she directed and produced a documentary titled Finding Kind. It carried the message of her organization.

In April 2014, Parsekian revealed to People that she suffered depression and developed an eating disorder when she was a middle-school student. She explained it was mostly because of the constant bullying and harassment she faced from other girls. Due to the bullying, she said her grades dropped.

The Californian added the taunts at some point grew so severe that she even tried to take her own life in seventh grade.

Her Kind Campaign made headlines in 2011 after it collaborated with Mattel’s doll line Monster High. It is one of the companies’ most popular dolls, to address school bullying.

She founded the campaign in February 2009, while attending Pepperdine with her friend, Molly Thompson. Upon graduating, they both drove across the country for two months to shoot their documentary and began to implement their assembly program into schools across the nation.

It deeply impacted the girls across the country and word spread quickly about their life-changing assembly program.

Since 2009, Paul’s wife and her friend, Molly have held Kind Campaign Founders Assemblies in hundreds of schools across North America and have completed eleven international anti-bullying school tours.

Her husband, Paul has also supported the Kind Campaign on numerous occasions. He once helped raise over $1.8 million via a charity. The campaign had coincided with Breaking Bad’s series finale.

She Almost Married Actor Aaron Paul On Their First Date

Parsekian married Paul in May 2013. Intriguing enough, the pair almost tied the knot on their first date.

Paul and Parsekian got engaged on New Year’s Eve 2011 in Paris. A few months later, the Breaking Bad actor said his fiancee was the “greatest woman that has ever existed.”

Paul doesn’t leave any chance to admire the mother of his child. In 2014, the Need For Speed actor disclosed he knew he wanted to spend the rest of his life with Parsekian on their very first date. In fact, Aaron almost married the Orange County native.

Paul first met Parsekian at Coachella in 2009. One year later, they reunited at the same music festival and this time hit off a relationship. After that, they went to Las Vegas to have their first date. It apparently went so well that the two decided to jump into a cab and asked to go to the nearest chapel.

Unfortunately, the then-new pair couldn’t exchange their vows as the Little White Chapel was closed.

The Idaho-born actor later confessed although getting married on their first date would have been a “pretty funny story,” he’s glad that they tied the knot when they did, in May 2013. Paul added that surprisingly he and his wife have never fought.

Paul and Parsekian got married at the Calamigos Ranch in Malibu in front of 250 guests. And yes the groom’s Breaking Bad co-star Bryan Cranston was also among the attendees. They had a 1920s Parisian carnival-themed reception (an ode to their 2011 engagement in Paris), which included mimes and stilt-walkers.

The bride later explained the ceremony was “beautiful and so emotional.” She said the first moment she saw Paul “will forever be the most perfect visual snapshot.”

At the wedding, Paul asked all the guests to sing his bride with one of the couple’s favorite songs, Beauty by the Shivers.

Parsekian revealed her husband-to-be had emailed the tune’s lyrics to the guests so that everyone could learn it, and it ended up being the most “overwhelming and beautiful” moment of her life.

They Have A Daughter

Parsekian and her husband, Paul share a daughter named Story Annabelle Paul, born, Feb 2018. The latter once said that they might want more.

In fact, the activist added her husband is “down to just keep [having children].” The Breaking Bad actor even pointed out that his life only began when his daughter was born.

It, however, is unclear if or when Aaron Paul and Lauren Parsekian will add the next member to their family.

Is Lauren Parsekian As Rich As Her Husband?

Being an owner of a non-profit organization, Lauren’s net worth might be an unconcerned topic to discuss but her husband’s fortune’s the one that many might be interested in. Having starred in one of the best series to have ever graced the small screen, Parsekian’s spouse gained substantially in terms of fame and money.

Even after the end of Breaking Bad, he went on to star in several successful projects including the sequel spin-off El Camino: A Breaking Bad Movie, Need for Speed, and Central Intelligence. He also provided his voice for the main character on the popular Netflix animated series BoJack Horseman. In addition, he has been among the casts of the shows such as The Path, Apple TV’s Truth Be Told, and HBO’s Westworld.

Multiple outlets agree that the father of Lauren’s daughter sits atop a net worth of over $20million. Together with his wife, Paul also possesses several properties. He once sold his Hollywood Hills cottage for $2.2 million and also has an extravagant cottage in his native Idaho.

Other Facts About Lauren Parsekian