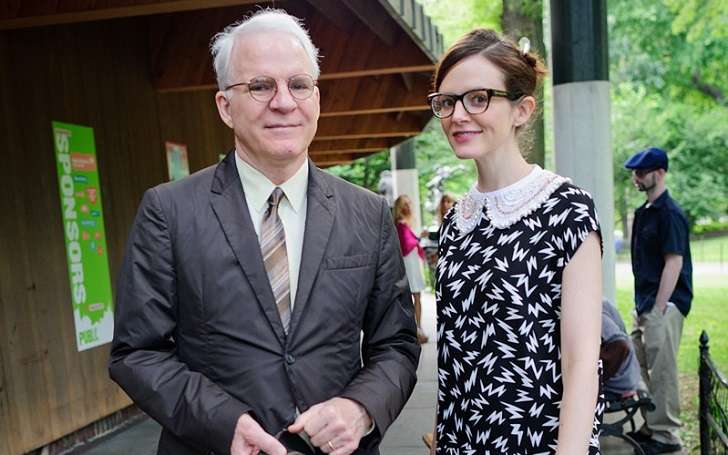 Anne Stringfield is an American writer who came into the light after marrying the distinguished comedian and actor Steve Martin. Although the two have a huge age gap, they still maintain a healthy relationship. What’s more, the duo even shares a kid.

On the other hand, Anne is a successful writer and a former New Yorker Magazine staffer. Let’s know how her year-long matrimonial relationship with her husband Steve is going.

Further, we will also discuss her career, parents, net worth, and the beginning of her love with the comedian.

Anne Stringfield was born in Pensacola, Florida, in 1972. She is the daughter of Dr. James Stringfield (father), a pulmonologist, and Margo Stringfield (mother), an archaeologist at the University of West Florida. She was raised along with her younger sister.

Anne is a writer who previously worked for the New Yorker. She was the fact-checker for the magazine. She landed her first job as a freelance writer at the reputed Vogue publication.

Besides, Stringfield also worked for some off-Broadway plays.

People broke the big news that renowned comedian Steve tied the knot with his much younger girlfriend-turned-wife, Anne Stringfield, on 28th July 2007.

The creator of Saturday Night Live Lorne Michaels was the main guest at the major event.

Steve first met his then-future wife Anne Stringfield after the woman was assigned to check one of his comedy pieces. Before the two came across, they talked on the phone for about a year.

Well, they soon clicked as a couple and chose to commit their lives to one another.

Anne is a 26-year younger than her husband Steve

The duo has a substantial age gap between them. Despite their age drastic difference of 26-year, the two are still leading a happy married life raising a daughter together.

The comedian talked about his family and wife at the Academy Of Motion Picture Arts And Sciences’ Fifth annual Governors Awards in November 2013.

My wife, Anne Stringfield … is as beautiful as she is smart. My wife alone would have been enough reward for my life, but now she’s brought me a wonderful child.

The duo too is quite supportive of each other.

They are proud parents of a daughter

Steve became a father at the age of 67 after his wife  Stringfield gave birth to their daughter in December 2012. A source close to the couple told Page Six, “They’ve had a baby and how they’ve kept it secret, nobody knows.”

They both are notoriously private about their daughter. The couple has even yet to reveal the name of their 8-year-old little girl to the media.

Back in April 2013, talking on The Late Show With David Letterman, Steve stated his daughter’s name is quite more eccentric than other Hollywood names. He told,

“I didn’t want to go with one of those Hollywood weird names. Conquistador is a statement”

In November 2014, their daughter was pictured for the first time when her mother Anne strolled in LA with her baby girl in her arms.

Anne Stringfield is the second wife of Steve Martin

Steve Martin previously married actress Victoria Tennant in November 1986. He met his ex-wife on the set of All of Me (1984). He played Roger Cobb while his then-future-wife Tennant portrayed Terry Hoskins in the project.

The two dated for some time before they walked down the aisle in 1986. However, their relationship did not last long and they divorced after eight-year of marriage in 1984. They didn’t share any children.

Martin also dated Bernadette Peters for years in the late 1970s and early 1980s. The two worked together in The Jerk and Pennies from Heaven.

How Much Is Stringfield’s Net Worth?

Anne Stringfield’s net worth is around 250,000. Besides, there is no doubt the woman is enjoying a lavish lifestyle considering her husband Steve’s $140 million net worth.

Tine Fey, a long-time pal of Steve told that her face is quite matching to his wife’s. She joked Martin tied the knot with “a woman who is, I think a younger, thinner, smarter version of me.”

Martin is one of the multi-talented personalities. He has already made quite a name on almost every major platform from acting to comedy to music. He gained early popularity as a writer for The Smothers Brothers Comedy Hour in the 1960s.

The man with many talents gradually focused on acting. Steve played various characters on The Sonny and Cher Comedy Hour (1971-73). He scored his first role on the silver screen portraying Hippy in Another Nice Mess (1972).

His other successful movies include Father of the Bride (1991), Cheaper by the Dozen 2 (2005), and more. Along with his splendid career, Martin also has won a number of prestigious accolades such as Academy Awards, American Comedy Awards, Grammy Awards, Golden Globe Awards, and Primetime Emmy Awards as well.

Besides, Steve is an avid art lover.