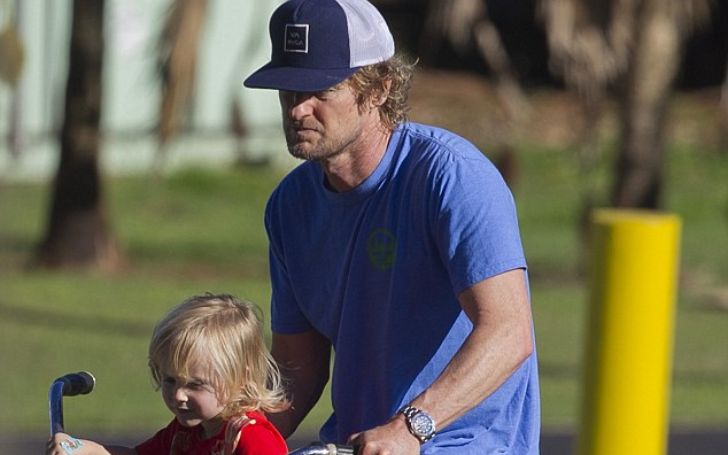 Finn Lindqvist Wilson is the son of the Zoolander actor Owen Wilson and his ex-girlfriend Caroline Lindqvist. Wilson welcomed Finn in the mid-2014 and seemingly is a great father to him. Finn rarely appears alongside his father, Owen Wilson in the public domain but his actor dad has mentioned him in several interviews.

In fact, Finn is one of Wilson’s kids who has seemingly kept the Loki actor’s hands full. In terms of providing for his kids, Wilson seems like a great father.

Finn is approaching pre-adolescent and there are a lot of concerns regarding his life. In the headings below, we discuss how the life of Wilson’s son has been so far, how many siblings he has, and who is his mother.

All Of Finn Lindqvist Wilson Paternal Family Are Celebrities

Finn, the son of Owen is also the grandson of the late Robert A Wilson, a landmark public television station executive. Robert was the one who introduced Monty Python’s Flying Circus to the American audience. Finn’s paternal grandmother, too, is a celebrity. She is a veteran photographer who has authored five books of photography and text.

Not only Finn’s grandparents, but his uncles, Luke and Andrew, too, are media famous. Luke is an actor who has been in films including Rushmore, My Dog Skip, Legally Blonde, The Royal Tenenbaums, and others.

Finn’s other uncle, Andrew is also in the film business. He has had roles in movies like Fever Pitch, Idiocracy, Church Ball, Whip It, Druid, and Time Trap.

The only son of Owen Wilson and his ex-girlfriend Caroline Lindqvist, Finn was born on Thursday morning 30 Jan 2014. The delivery took place at Cedars Sinai in West Hollywood at 3 am.

Finn’s parents Owen and Caroline met around the year 2007. It is unclear whether they ever dated or not but they did have brief sexual romps amidst the time when Caroline was seeking a divorce from her ex-husband Ritu Chopra. When the Cars actor met Lindqvist, she was still married to plastic surgeon Ritu Chopra.

In the beginning Caroline, a Swedish born was Wilson’s personal trainer. Wilson is two years older than Lindqvist. Caroline met Wilson shortly after the actor’s suicide attempt in 2007 which itself was after his split from the Almost Famous actress Kate Hudson.

By the time of Finn’s birth, Wilson and Caroline were no longer a couple. One of the insiders however said Wilson was there with Lindqvist throughout her pregnancy. He reportedly also accompanied her to the doctor’s appointments and made sure Caroline was doing okay. The actor also visited her and his newborn baby every day after his arrival.

Some sources report Wilson and Caroline mutually never thought of making their relationship serious but they did want to have a baby together.

Also when Caroline welcomed Finn and even when she was pregnant with him, Lindqvist was still the wife of Rita Chopra though she had separated from him. Chopra at the time was a plastic surgeon from Beverly Hills. He additionally is an entrepreneur who had his own skincare line, Ratio. Finn’s mother, Lindqvist filed for divorce from Chopra after discovering she was pregnant with Wilson’s child.

Despite no longer being together, Caroline and Owen amicably co-parent their son, Finn.

In the meantime, Finn’s father, Owen, while, he has had several relationships in the past, he is yet to get married. He never made any of his former girlfriends his wife.

Finn Has Two Half Siblings

Finn has two half-siblings, Robert Ford Wilson and Lyla Aranya Wilson. Robert is his elder half-brother while Lyla is his younger half-sister. Both of them were born through Owen’s different relationships. The Wedding Crashers actor had Robert with his former partner Jade Duell on Jan 14, 2011, in Hawaii. Lyla was born through Wilson’s other ex-girlfriend, Varunie Vongsvirates on October 9, 2018.

Wilson once revealed Finn is a “me too” child who wants to do what his older brother does, all the time.

Besides, Finn also has a cousin named, Joseph Obiamiwe Wilson.

Although Wilson says Finn has a happy relationship with his half-brother, Robert it is unclear if he has ever met his half-sister Lyla. In fact, quite surprisingly not even Wilson has apparently met his daughter, Lyla.

The actor’s daughter who was born in 2018, Wilson has kept himself away from seeing her. What’s more, the Marley And Me actor refused he was Lyla’s biological father when his ex-girlfriend Varunie told him she was pregnant with his baby girl. He also neglected Varunie during her pregnancy as well as her labor.

Later, the DNA test proved Wilson was indeed Lyla’s biological dad. Consequently, Owen had to pay $70,000 as a one-off payment to compensate for Varunie’s pregnancy cost and some $25,000 a month in child support.

While the Zoolander actor hasn’t addressed why he is yet to see Varunie in person, he still pays for her expenses.

Finn and his elder half-brother apparently are among the celebrity kids who do not really care about their parents being a part of animated kid movies. One of the famous roles that Wilson has played also includes Lighting McQueen in the popular Disney animated franchise Cars. Owen however once said his sons, Finn and Robert really do not find his credit in the movie that fascinating. During an interview with Ellen Degeneres in early 2017, Finn’s father said,

I do get some street cred with their classmates.

The father of three in the interview, also revealed his kids thought he was delusional when he told them he was the voice of Lightning McQueen in Cars.

Wilson has revealed his son Finn specifically doesn’t care in the slightest that his father is famous. However, when Finn was three, Wilson, in 2017, told Jimmy Kimmel, that he liked the 1984 film Karate Kid when the actor showed it to him and his other son, Robert.