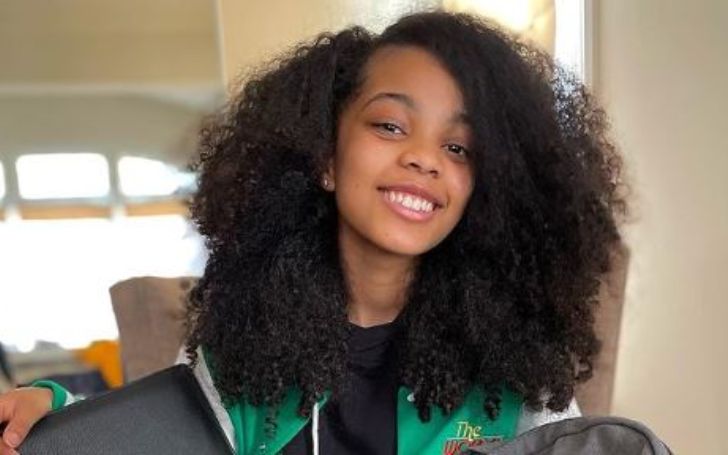 Milan Ray is a 14 years old rising star well known for her role in the Amazon Original feature Troop Zero. The child actress gained instant prominence as a model at the young age of six.

Similarly, one of her notable acting credits is The Wonder Years where Milan played the role of Keisa Clemmons. She made further headlines following her announcement as one of the casts in Marvel’s upcoming project Blade.

What Is Milan Ray’s Current Age? Details Of Her Parents & Siblings

The model/actress Milan was born on 11th January 2008 in the United States. Her birth sign is Capricorn and the rising star turned 14 as of 2022. Besides, Ray holds an American nationality and has a mixed ethnical background, African-American and Puerto Rican.

As per some online tabloids, Milan was born to mother Allison Ray and father Dustin Ray who is a professional doctor with 12 years of experience in hand surgery.

Talking about her siblings, she has a brother named Victor Ray who is currently 17 years old. She also has a sister whose identity is currently hidden from the media.

The 14-year-old rising actress plans to pursue further education at Howard University in Washington DC. As per Milan herself, she wants to join the institute mainly because some of her favorites like Taraji P. Henson, Anthony Anderson, Chadwick Boseman, and Debbie Allen went there. As for now, Ray is currently doing online school.

Troop Zero star began her modeling journey with commercial ads for local as well as international brands at just 6. As of now, she has worked with brands like Walmart, Ivy Park, Sesi Magazine, and several others.

On the other hand, Milan made her acting debut in the 2019 comedy-drama film Troop Zero alongside fellow star kids Viola Davis, Mckenna Grace, Jim Gaffigan, and others. In the movie, she played the role of Hell-No Price and quickly managed to grab both the public and media attention.

Ever since her movie debut, Ray has not looked back. She joined the cast of the TV series Boomerang as Young Simone. After that, she had a brief role as Shay in the 2020 film Charm City Kings.

Her major breakthrough came as Keisa Clemmons in the 2021 television series The Wonder Years. She appeared in the ABC comedy-drama series along with Elisha Williams, Dule Hill, Laura Kariuki, and others until 2022.

Surprisingly, Milan has also managed to land an unidentified lead role in the movie alongside A-listers. As of July 2022, the movie includes a small number of casts like Mahershala Ali, Delroy Lindo, and Aaron Pierre.

According to many fan theories, Ray’s character was guessed as the canceled Marvel Comics character Fallon Grey, the daughter of Blade. The character was first announced during the 2015 Comic-Con but it never made it to the printers.

However, the comics recently retooled the character into Brielle, aka Bloodline, who officially debuted as the daughter of Blade in Free Comic Book Day: Avengers/X-Men #1.

Hopefully, the creators will let their fans from all around know about Milan’s official role in the movie very soon.

Apart from acting and modeling, Ray is also involved in several charitable events and volunteering works especially at animal charities. She owns a rabbit named Zara whom she takes everywhere she goes.

In October 2021, she visited One O’clock Academy under the Saving Our Daughter’s Cinderellas Program. It focuses on adolescent BIPOC to integrate values of confidence and leadership into their daily lives.

As one’s career grows, so does their fame and name. And the same thing is happening with Milan as many fans and followers are curious to know about her off-screen love life.

Sadly, details of her relationships and boyfriend have not hit the internet for now. Also, going through her socials, Milan has not hinted at any possible budding romance.

She has over 7k followers on her IG handle which goes by @itsjust.milan. Not to forget, her Instagram is also verified.

Is Milan Ray A Millionaire?

With a rising career at such young age, Ray surely has earned a decent amount from her career. According to some sources, her current net worth is around $1 million which she earns as a model and actress.