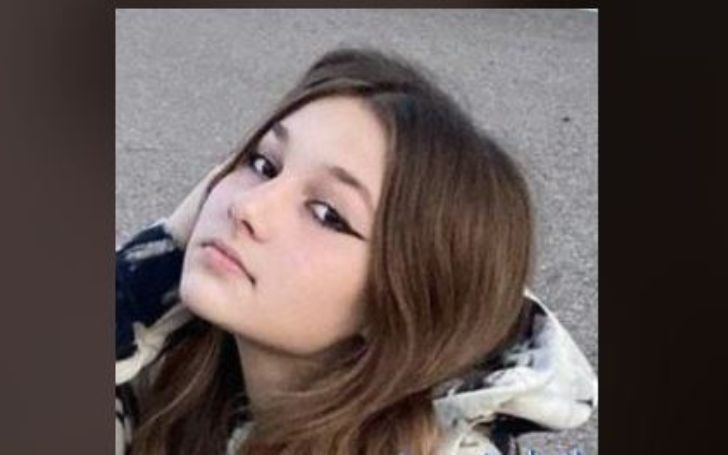 Sara Dobrik is the younger sister of a famous Youtuber, David Dobrik, who is famous for his titular Youtube vlog channel. He is also famous as the co-founder of the photography app Dispo.

His vlog channel by the year 2022 had 18.3 million subscribers and nearly 7 billion views. The eldest of Dobrik’s children was the fifth-most viewed creator channel on YouTube in 2019, with 2.4 billion views that year.

David’s sister, Sara, a teenager, on the other hand, has a little less than 100k followers on Instagram (more than 400k on Tiktok), and while she appears as though she isn’t into the game of internet prominence, she is quite a noteworthy name among the fans of her brother.

See how she’s doing as a young closed one of a famous celebrity; know if she is going to follow in her brother’s footsteps or has an all different passion. Also, read whether she has a boyfriend and quite a bit onto her personal matters.

The youngest sister of David Dobrik, Sara Dobrik was born in Aug 2006; she celebrates her birthday on the 6th. Although her brother, David is one of the popular faces on Youtube, information about her parents isn’t that readily available.

The now 16-year-old teenager is Hungarian from her mother’s side and a Slovak from her dad’s; he was born in Košice. While her big brother and elder sister Ester do have visited their parents’ land, it is unclear if Sara ever has been to Slovakia.

Her family relocated to Illinois when her brother, David was only 6 years old, and they remain there to this day except for Dobrik who reportedly splits his time between LA and his native state.

Her father, Pavo Dobrik, is a photographer, and while her mother’s name is still a mystery, she has only ever been referred to as “Mrs. Dobrik” on the few occasions that she has made an appearance on her eldest son’s videos.

As per Reddit, Sara and David’s mother has only really appeared on his socials on a few other occasions, like the above TikTok video.

There only lies a handful of images of hers in the Dobrik family all together in David’s original apartment before he became mega-famous.

In fact, her parents haven’t appeared much in David’s videos, but there are a few occasions where they have popped up though mostly in the past. One such occasion was in a 2018 vlog where Sara’s famous brother bought his father a new car.

While David’s dad appears prominently throughout the video, his mother, who is a much rarer face on his social channels, also shows up for a few seconds.

Sara’s mother once also appeared on her elder sister, Ester’s Tiktok although it, too, is one of the few times that people have seen her.

In addition to David, the now 14 years old’s siblings include Ester and Toby, the former is elder than her while the latter is the youngest in the Dobrik family.

Sara unlike David and her elder sister, Ester, is yet to reveal what School she goes to. It, however, is believed she studies at Vernon Hills High, Illinois, Chicago.

As of recent, Sara’s elder sister, Ester is a designer who makes her own clothes and has a clothing line, Whoopsie Daisys Shop. She had also had training in sewing during her freshman to sophomore year.

Ester has said that she wants to pursue fashion and design in New York for her college degree. Ester also used to be a lifeguard but later started to make money through sponsorship. She additionally is an Instagram influencer in her own right.

She catapulted into fame after a video of hers doing the famous relative check on TikTok got viral. The video where she showed a handful of pictures of her famous brother, David went on to gain over 2 million likes.

While her Youtube star brother David has joked a few or two times whilst having a Q & A with his siblings that they are actually adopted, it is unclear for real if that is really the case.

Sara Was A Popular Kid In The School

In one of David’s earlier videos, Sara admits to being the popular kid in the school.

In the same video, when the eldest Dobrik asked if anyone of his siblings have smoked weed, Sara responded by saying, Yeah, that’s me. It though is unclear if Sara was actually serious with the answer or just bantering.

Does Sara Dobrik Have A Boyfriend?

While it appears she might be single for the time being,  there though is a piece of TikTok from Sara that conveys the impression the younger sister of David Dobrik did have a boyfriend in the past.

The short video by the title, Sara Dobrik Recreates Pictures With Her Boyfriend includes a handful of images from Sara and her then alleged partner where the two imitate famous images from the internet.

The short is from Sara’s brother, David’s YouTube channel. What’s intriguing though is it’s been a while since Sara has talked about this supposed partner of hers.

It is also unclear as to who he was or when did the teenager exactly start dating him or if they were a couple in the first place. What also is inexplicit is if the rumored couple is still together or not.

A moment of spoof that might be worth remembering here is the famous q and a video of David and all his siblings wherein the Slovak-American YouTuber teases Sara by calling him the girlfriend of a guy named Griffin. Griffin apparently was the classmate of Sara.

However, in the video with an 11million plus views, Sara negates right away telling Griffin is not her partner but just some guy who she thinks likes her.

What Does Sara Dobrik Do?

For all that notoriety her brother has gained in the last few years, Sara herself is yet to make her own mark in internet fame. She also often poses wearing her designer sister’s clothes.

Though it might be worth noting that of all the Dobrik’s younger siblings, it is Ester who has shown some interest in following her brother’s footsteps. This she mentioned back when she and her two younger siblings, Sara and Toby first appeared on David’s video for a Q&A Youtube session on Dec. 29, 2016.

In the same Q and A, when David asked if their youngers wanted to be a vlogger or YouTubers, Ester was the only one to give some positive remarks.

As for Sara, her Instagram and Tiktok fans recently noted her occasionally posing in front of a PC with a joystick, and since then many of her followers believe that she might be thinking of making a career in online gaming.

Sara Has Appeared On David Dobrik’s Vlogs; Her Parents Though Didn’t Allow Her To Be In His Videos Much

Sara and her other two siblings rarely made an appearance on David’s vlog while growing up. Many assume this might have to do with the style of the content or the geographic distance setting them apart.

When they were young, Sara and her siblings – appearing one time in one of their brother’s videos – said David, and their parents avoided them to star in their big brother’s videos.

It mostly was because their parents think that there’s too much swearing in David’s youtube projects as well as many adult subjects. The last time Ester, Sarah, and Toby made an appearance on David’s YouTube channel – was in a vlog that the eldest Dobrik had aired on Dec. 31, 2017.

At the time, the eldest Dobrik invited his siblings to participate in a Questions & Answers session.

David apparently did so in order to introduce the viewers to his family background, shedding light on some unexplored aspects of his closed ones.

When the Youtuber/Podcaster rephrased the questions from the internet and asked about whether there were any perks to having a famous person in the family, the kids jokingly responded with a firm no.

Sara As A Sister Of A Famous Brother

Although Sara and the rest of her siblings have appeared relatively less in David’s vlog, the sisters have affirmed having David as a brother had its ups and downs.

One of the downsides, the girls claimed was bullying and having to handle people who found their brother more interesting than them.