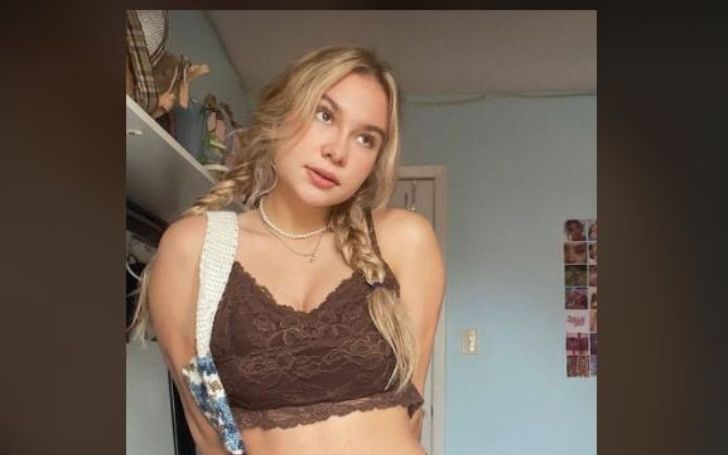 Ester Dobrik is a rising social media influencer who is also known as the younger sister of another famous Youtuber, David Dobrik, whose vlog channel by the year 2022 had 18.3 million subscribers and nearly 7 billion views. His channel further was the fifth-most viewed creator channel on YouTube in 2019, with 2.4 billion views that year.

David’s sister, Ester, a teenager, on the other hand, has a little over 700k followers on Tiktok, and more than 200k on Instagram.

See how she’s doing as a young and ascending internet personality; know if she is actually following in her brother’s footsteps or has a niche all different than him. Progressively also latch on to whether she has a boyfriend or considers herself a little too young.

Ester Dobrik Is A Slovakian-American

Ester was born on March 4th, 2004 in Chicago, Illinois, and is mostly of Slovakian descent. Her father was born in Košice and her mother who is fluent in Hungarian is also a Slovak.

So far, Ester says she has been to Slovakia twice.

In addition to David, the now 18 years old’s siblings include Sara Dobrik and Toby, both younger than Ester. Ester, a Pisces, when reported in 2020 was a student at Vernon Hills High School, Illinois, Chicago. She had started school at Vernon on August 29, 2018.

There she took sewing classes during her freshman to sophomore year. Ester, in fact, says she wants to pursue fashion and design in New York for her college degree.

While David has joked a few or two times whilst having a Q & A with his siblings that they are actually adopted, it is unclear for real if that is really the case.

Ester Dobrik Is A Designer And Has Her Own Clothing Line

As of recent, David’s younger sister, Ester is a designer who makes her own clothes and has a clothing line, Whoopsie Daisys Shop. For sewing, she mostly uses Bernette B79 Sewing & Embroidery Machine Bundle with Software Package.

Ester says it was quarantine 2020 that led her to explore her style and made her into a fashionista. She once revealed she buys her clothes mostly from Princess Polly. When asked if she has a job, Ester, in 2020, through her Ig stories, responded by saying she used to be a lifeguard but later started to make money through sponsorship.

Ester Dobrik catapulted into fame after a video of hers doing the famous relative check on TikTok got viral. The video where she showed a bunch of pictures of her famous brother, David went on to get over 2million likes.

Ester, however, once in a podcast, said despite her TikTok getting massive attention right away, she deleted the post because she revealed she felt it stupid afterward.

In the beginning, she used to run a successful Musical.ly page where she posted short, snappy clips involving lip-syncing, dance routines, and some character impersonations. She later, however, switched to TikTok sort of full-time.

Does Ester Dobrik Have A Boyfriend?

Ester was apparently single up until March 2022, the month when she introduced a new boy to her Instagram followers. Though the ambiguity remains about who the guy really is or if he is actually her boyfriend. What nonetheless insinuates their relationship is the way in which the two are clinging to each other in the image.

In any case, considering the presumed fact that Ester has been quite secretive about her love life, it might be still some time before she confirms if she is actually dating the guy in the sunglasses. A while back, there was also a rumor of her and her friend, Harry dating, but Ester, herself canceled out that saying he was just her BFF.

What Is Ester Dobrik Net Worth?

While not even the approx figure in this regard is very much in the known, the interpretation of her net worth or her current takeaways from her social media career can be taken from this one incident.

During a podcast, her brother, David revealed Ester once texted him asking about how much she should charge brands for promoting their products. Ester then had 700,000 followers and was thinking about a $50 per posting promotion.

David then told her to start at $800. Ester says by that point she had already received seven different clothing items which when she revealed to David, he said her to ask for $2000.

Ester though couldn’t get the aforementioned asking price but it nonetheless was her first step into making money from influencer marketing. Her famous brother nonetheless in the same interview stated the amount was what Ester’s TikTok numbers deserved which is at least a thousand dollars per post.

Though the figure sure must have risen to a considerable height since she is adding to her reach more by the days. Having said that, she at a conservative estimate could be pulling in anywhere in the domain of tens of thousands of dollars. Her, well-known brother, David, however, is still the richest Dobrik with a net worth of over $25million.

Ester Has Appeared On David Dobrik’s Vlogs; Her Parents Didn’t Allow Her To Be In His Videos That Much

Ester and her other two siblings rarely made an appearance on David’s vlog while growing up. Many speculate this might have to do with the style of the content or the geographic distance setting them apart.

The last time Ester, Sarah, and Toby made an appearance on David’s YouTube channel – was in a vlog that David had aired on Dec. 31, 2017.

At the time, the eldest Dobrik had invited his siblings to participate in a Q&A. This David did so in order to introduce the viewers to his family background, shedding light on hitherto unexplored aspects of his private life.

When David reiterated questions from the internet and asked about whether there were any perks to having a famous person in the family, the kids jokingly responded with a firm no.

Ester As A Sister Of A Famous Brother

As for the girls, Ester and Sarah explained having David as a brother had its ups and downs. Asked about the downsides, the girls named bullying and having to handle people who found their brother more interesting than them.

Further, when David asked his siblings whether they would choose Jake Paul or him, they named Jake Paul.

The first time Ester and her siblings appeared on David’s video was for a similar Q&A Youtube session on Dec. 29, 2016. While the eldest vlogger brother this time also asked similar questions as he did in his 2017 video, the answers he received could not have been more different.

The little ones in the first video said there were some perks of having a famous person in the family; they agreed there are some positive aspects to it. In the same Q and A, it was only Ester who gave some thought to following in her brother’s footsteps.