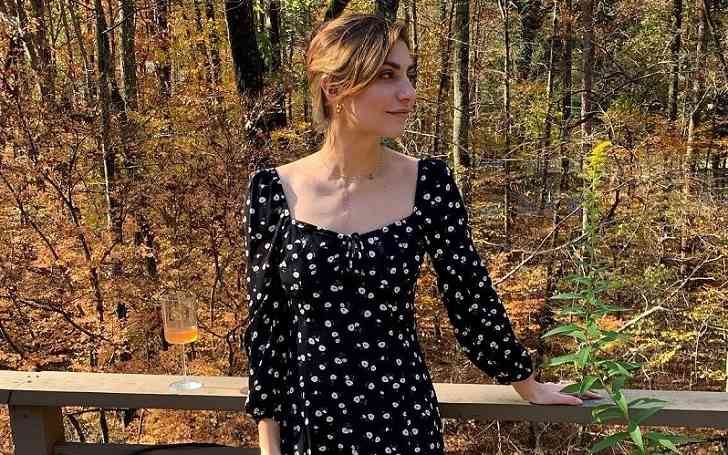 Kiley Casciano (aka Kiley Casciano Davis) is an actress from Atlanta, who has worked in a handful of movies and TV shows. She is predominantly known for her role on the Netflix hit TV series Ozark as well as in Nappily Ever After.

But, Casciano grabbed further attention when the actress married Matthew Davis, an actor who played the iconic character of Alaric Saltzman on the TV drama The Vampire Diaries. The power couple who has been together for years is also the proud parents of a child.

In addition, we will explore more about Matthew Davis’ wife Kiley’s life including her deadly car accident, parents’ divorce, and more…

What is Kiley Casciano Age? Her Early Life

Her age is 28 as of 2021. Kiley was born in Atlanta, Georgia, on October 4, 1992. Spending most of her early life in Atlanta, Casciano went to Grayson High School in Loganville, Georgia.

Besides, as far as her nationality is concerned, Kiley is an American and belongs to the Caucasian ethnicity.

Kiley Casciano is the daughter of Pete Casciano and his ex-wife, Joan Hobbie Todd, an Irvington, New Jersey native. Born and raised in Springfield, New Jersey, Pete graduated from Jonathon Dayton Regional. Her parents were in a relationship for years before they divorced. Her father is now engaged to Holli Thompson, an owner, and founder at Southern Roots Charm.

Casciano grew up along with her four siblings; three sisters Nancy, Amber, and Leah Casciano as well as a brother Matt Casciano. All of her siblings have forged a solid career in their own way rights. Nancy, a Professional Performing Arts High School graduate now works at Pacific Northwest Ballet. In the meantime, her other sista Leah is a weight lifter. She also founded Mental Kilter, a nonprofit organization.

Matthew Davis’ wife Kiley is an actress who began her acting career with the role of Camille on the TV series NCIS: New Orleans in 2016. A year after there, Casciano played on Fox network TV series 24-Legacy along with Corey Hawkins, Miranda Otto, and Anna Diop.

In 2018, Kiley appeared Leila in Claws. The same year, the actress portrayed the role of Alison on the Netflix series Nappily Ever After sharing the screen along with Sanaa Lathan and Ernie Hudson.

From 2018-20, Kiley went on to portray Lulu in another Netflix series Ozark which was produced by Jason Bateman and Laura Linney. Her other TV credits include The Tomorrow War and Twisted House Sitter.

Kiley and her hubby Matthew have been married for over four years. The adorable couple tied the knot on 23rd December 2017.

Their wedding was done in the spur of a moment as the duo had only been engaged just a couple of hours before their marriage.

The Legally Blonde actor announced the big news with a series of Instagram photos. He captioned the image,

“When you ask your lover if they want to get married while shopping in the produce section of Erewhon, and 3 hours later you’re married on Christmas Eve Eve. Thanks to Abbot Kinney [Boulevard] for the last minute provisions #AVeryMarriedChristmas.”

Their wedding ceremony took place at the Albertson Wedding Chapel in Los Angeles. “This is where we got married … in a strip mall,” Kiley wrote on her Instagram story.

As for their wedding dress, the actor was in an off-white shirt and dark pants while his wife wore a sleeveless white dress which was designed by a famed clothing company Anze Apparel in Los Angels.

Furthermore, Matthew also showed off his wedding ring, a beaten gold band on several of their photos from the monumental event. On the other hand, Kiley wore a rainbow moonstone that came from the Jewelry brand Made in Earth.

The couple, who has been married since 2017 is blessed with a child, a daughter Ripley Nightingale Davis on 31st March 2020. The Vampire Diaries star announced the arrival of his baby girl via  Twitter, telling his millions of fans that Ripley was born at  9:51 p.m. local time and weighed 7 lbs.

Kiley and her spouse Matthew unveiled their pregnancy in September in an Instagram post that featured their girl’s sonogram. The actress also revealed the arrival date of their daughter, writing,

In Feb 2020, they also celebrated the pregnancy with a baby shower in front of their family members and friends.

“Some photos from our baby shower last weekend.  ✨  thank you x a million to the small army that helped pull this all together and to our friends and family that helped us celebrate our little love. See you soon sweet baby.”

Since Kiley became the mother, the actress has posted a couple of photos with her baby girl, flaunting her motherhood on Insta.

According to their social media handles, the family of three currently resides in Atlanta, Georgia.

What is Kiley Casciano Net Worth?

The actress has an estimated net worth of $1.5 million. She has racked such a good amount of money from her work on movies and TV shows. In the meantime, Kiley Casciano’s husband Matthew’s estimated wealth is $2 million as of 2021. Similarly, his acting career has played a huge role to rack such considerable wealth.

Davis who has been active in show business has appeared in dozens of movies and TV shows. His most notable on-screen credits include Legally Blonde, What About Brian, and CSI: Crime Scene Investigation. The actor currently plays the main role of Alaric Saltzman on The CW’s series Legacies.

Also Read: Who Is Shaun Sipos? All About His Professional and Personal Life

What Happened to Kiley Casciano Davis? Her Dreadful Car Accident

Back in April 2017, Kiley was heavily injured in a horrific car accident when the actress was on her way home from her going-away party on 3rd April. She was soon rushed to Grady Memorial Hospital, along with her boyfriend, who was driving.

Her brother Matt said that Kiley is too “lucky to survive at all.”

He further revealed that his sister Amber was with Kiley at the hospital. Her other siblings including Leah also prayed for her speedy recovery via a lengthy Facebook post.