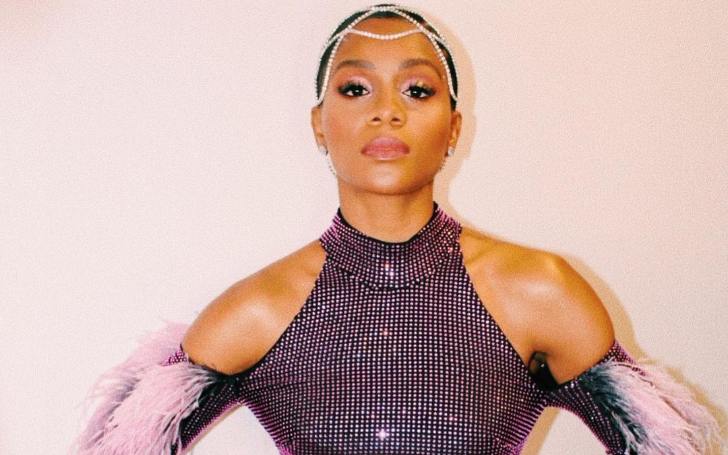 Geffri Hightower (full name: Geffri Maya Hightower) is an American actress best known for Private Practice (2000), WTF, Baron Davis (2019), and Loco (2020). Lately, she is in the limelight for her character Simon Hicks in the American sports drama TV series, All American: Homecoming.

In addition to her acting career, her audiences are highly interested to know about her personal life too. Is Geffri Hightower dating a boyfriend? Apart from her love life, who are her parents? What was her early life like?

Today, let’s find out every personal and professional detail about the Private Practice famed actress Geffri Maya Hightower in the following article. Here we go.

Geffri Hightower (aka Geffri Maya) was born to her parents on February 25, 1995, in South Central Los Angeles, California, the United States. As of 2023, she is 27 years of age.

Similarly, Hightower grew up in a lower-middle-class family of her mother and grandmother in her hometown. Her mom Stephanie Renee Hightower raised her single-handedly but having said that, it doesn’t mean there was no presence of her father in her life. While growing up, Geffri maintained a relationship with her both parents.

Besides, the Black actor who stands height at 5 feet and 6 inches belongs to the African-American ethnicity. Further, she is American by nationality. Her Zodiac sign is Pisces.

As for education, Hightower went to Hamilton High School. For further study, she enrolled at HBCU Clark Atlanta University where she studied mass communications and journalism.

Geffri Hightower Is An Actress; What Movies And Series Did She Play In?

As mentioned earlier, Geffri Maya is a Hollywood actress. She started acting at the very young age of 11. In the year 2006, she debuted as a child actress through the TV series, Jericho. After that, she played the character Latrinda in the 2008 TV series, Everybody Hates Chris.

Following her first two projects, she then portrayed the character of Maya Bennett in 12 episodes of the TV series, Private Practice (2007-2010). Her role as a Maya gave her recognition as an actress in American Entertainment Industry. Further, her acting credits include Q & A, Blaq Gold, Defending Daddy, Nasty Habits, Beast mode, Loco, and many others.

Lately, in 2022, she played the character Simone Hicks in the 2022 TV series American: Homecoming. On May 22, 2022, she promoted her latest series Homecoming season 2 on her Insta and wrote,

It’s been a beautiful week. Grateful & humbled to share this stage in honor of celebrating what I believe is our mission as artists: authentic storytelling, reflection & connection.
Thank you to my wonderful team for your art & supporting such a special moment in my life.

In All American: Homecoming, Hightower appeared next to Peyton Alex Smith, Kelly Jenrette, and Cory Hardrict.

Hightower Developed Passion In Acting As A Child

Since a young age, Geffri wanted to be an actress. She grew up watching child actors on her Television which ignited an interest in her to be in the place of those child actors. Hightower was greatly mesmerized by their acting while she was still little. Once in an exclusive talk, she told,

“I would just be like, ‘Why can’t I go there (inside TV)? Like, Mom, what’s up? I’m trying to be in these places with these kids,’” And she didn’t really understand what I meant when I was saying that.

Afterward, she debuted on TV as a child actor. But with growing age, she decided to study journalism and was completely out of the acting world. In those years, Hightower said that she was expecting some miracle in her life so that she could join acting once again. The Homecoming actress said that she prayed to god for this and her prayers are like this,

“If I’m meant to act again, please just let it come to me in a different kind of way. Let my passion and my diligence be different than what it was.”

Right now, she is working on her passion. While talking about her acting projects, she said that now her mom realized what she wanted to say while she was a child. The actress stated,

Now, as I’m older and I’m doing what it is that I want to do and letting my art lead me, it made more sense to her now. Like, ‘Oh, you’ve always just wanted to be on the screen in these places.’”

Geffri’s Mom Inspired Her To Dream Big; She Credits Her Mother For What She Has Become Today

Today, she is identified as one of the most talented actresses in the American Entertainment Industry. For all her achievements, she credits her mom. Geffri stated,

My mom was always pushing me to want more out of my life.

In this regard, she further added,

what my mother instilled in me was to always dream bigger, want more.

Seeing this, we can say that Geffri Maya always had a great backup from her mother and her mom’s boundless support and motivation made her what she is today.

Is Geffri Hightower A Dancer As Well?

The California-born actress is not a professional dancer but, as a child, she got a little bit of training in dance at the Debbie Allen Dance Academy in Los Angeles. Just like in acting, she was equally interested in dance as well due to which she also planned to attend Fordham University to study dance.

However, she later changed her mind and went on to study Journalism at Black College Clark Atlanta. Eventually, after her graduation, she started her career in acting and the rest is history.

Talking about her relationship status, the Loco actress Geffri seems to be single as of 2023. There is no authentic information about her being in a relationship with any boyfriend, neither in past nor at present. Further, she very rarely talks about her personal life, and in addition, her social media account also does not show any sign of anyone special in her life.

However, having no authentic detail about her dating life doesn’t mean that she is absolutely single. Looking at her age, we cannot deny the possibility of the 27-year-old actress being in a secret love affair. Whatever her relationship status is, we are certain that at present, Hightower is more occupied with her series All American: Homecoming. Possibly, very soon, we will get to know about her personal life as well, alongside her professional career.

Geffri Maya is hugely active on Instagram with 282k followers. On her verified Insta account, Hightower mostly shared her single photos and in addition, she keeps promoting her work on her Insta page.

Geffri has been working as an actor since the age of 11. So, undoubtedly, she has earned quite a good amount of money from her acting career. Hightower is reportedly to have an estimated net worth of $1.5 million as of 2023.