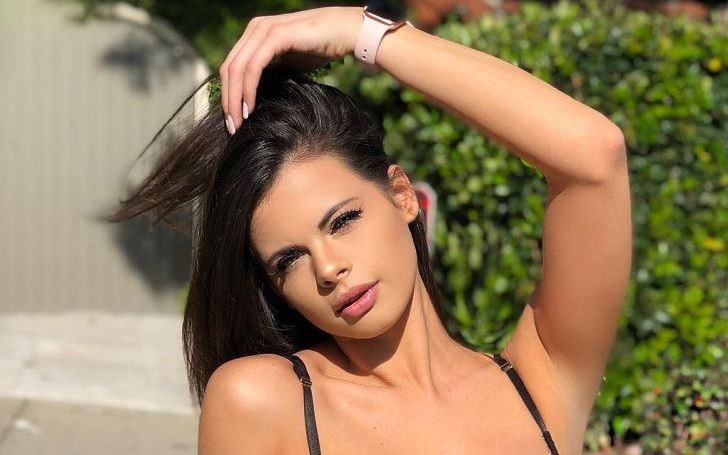 Florida-born Katie Bell, 27, has been gracing social media with her scantily clad photos for years now. The Instagram model has a mega-fan following of 1.5 million on her account as of 2022.

But, Bell wants to give all the credit for her successful Instagram and modeling career to her ex-boyfriend Dan Bilzerian. What is the story behind this? How long had Katie and her former boyfriend Dan been in a relationship?

Today you’ll find out along with her family and professional accomplishments.

Who is Katie Bell? Her Mother Left Family When Katie was a Child

Katie is a social media star. She was born on 30th March 1995, in Palm Harbor, Florida and her age is 27 as of 2022. She told The Two-Men Show she had a tough childhood. Her mother abandoned the family when she was just a child.

Later on, her Parish-born father handled the family but couldn’t take care of them perfectly. He had cancer in lymph nodes for a year and later went through chemotherapy.

Some times later Bell reunited with her mom. As of now, Bell has a good connection with her mom and they usually talk every day.

As for her education, Katie studied at Palmer University High School.

Bell Has a Younger Sister

Katie grew up with her younger sister. Several tabloids reported that she also has two brothers. But, Bell herself admitted she doesn’t have brothers in an interview with Before They Were Famous.

Katie Bell used to work at a vape shop called lizard juice and even got promoted to the manager post. She also worked as a little kiosk in the mall, selling cigarettes to people.

She later moved to the corporate office and worked for five years as a social media director.

Is an Ambassador for Dan’s Company, Ignite Cannabis

Katie Bell also serves as an ambassador for a company called Ignite Cannabis. It was founded by her ex-beau Dan Bilzerian in 2017. It is the first company that promotes the cannabis brand globally.

Her Journey to Los Angeles with Boyfriend Dan Bilzerian

Katie and Dan’s love story began via Instagram back in 2018. Bell sent her pictures to Bilzerian knowing his love for girls. And like a moth to a flame, he wrote back a day later “you’re cute” and also asked her to come to Los Angeles.

At first, she didn’t take Dan up on his offer. She stopped talking to him for a week and then after some time she sent a video. Bilzerian again replied, “you’re cute and you don’t need filters.”

She then decided to go to LA. Her then-future boyfriend Dan himself came to pick her up in his private jet from Tampa, in September 2018.

The couple subsequently started dating. On 25th September 2018, Dan posted the first photo with Bell surrounded by many other women.

On 7th November of the same year, Bilzerian even posted a single photo of his girlfriend on his Insta. The couple dated for almost a year before they broke up in early late 2019.

Neither Bell nor her boyfriend Bilzerian reported how their whirlwind romance came to an end. But the social media star opened up about her split with Dan in an interview with The Two-Men Show. According to her, they split amicably.

“even if we were to break up we’re still gonna best friends forever.”

Bell also revealed Dan is the man who played a major role in the rapid growth of her social media career. When the interviewer asked why she has so much gratitude towards him, she said,

It seems they are still close but not romantically.

Past Relationships: Who is Katie Bell’s Boyfriend in 2022?

The Instagram star revealed in the abovementioned video that she once dated a schoolboy when she was in 10th grade.

“I remember one time I got even hooked up with a guy I really really liked him.”

The two broke up after he suddenly stopped talking to her. She never revealed the name of her ex-beau.

Talking about her current relationship status, Bell is not dating anyone in 2022. She said she would never want to be in any kind of relationship,

“I’ve never wanted to really be in relationships anybody”

Thus, it is safe to say that the social media star is single at present.

How Much is Katie Bell Net Worth?

Katie has an estimated net worth of $350,000, as per several authorized online sources. She mainly makes fortune from her popular Instagram account and several other works.