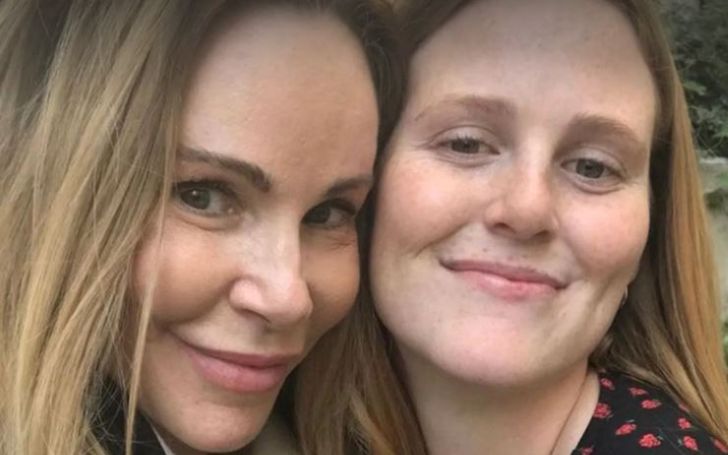 Raine Finley is a former high school star softball player and now a music student in California who is better known as the daughter of the late actress, Tawny Kitaen, and her ex-husband, an ex-MLB player for Califonia Angels, Chuck Finley.

Kitaen and Chuck’s daughter, Raine, like her mother, also works in the films though not as an actress; she is currently working as an intern learning sound and music under the supervision of music experts. Well, while her professional life is pretty much open in the media, what about her love life? Is she married or dating a boyfriend.

In this article, we are going to talk about Raine Finley’s love life, her parents’ relationship, career, and several other interesting details about her.

Raine Finley Is The Daughter of Late Actress Tawny Kitaen

Raine, who is now 24 years old was born in June 1998 in Newport Beach, California. She is the second daughter of Tawny and Chuck. Raine has an elder sister, Wynter Finley who is in marketing and communications.

Finley graduated from Corona del Mar High School in 2017 and after that went to study at the Art Institute of California in San Francisco. She is a student at the Art Academy majoring in Bachelor of Fine Arts Sound Design.

She apparently is also studying music composition for Digital Media. Raine says she aspires to become a part of the creation process for TV shows, podcasts, and movies.

As a child, Finley played softball starting as early as age 6. She was also a member of the YMCA (Youth and Government California).

In fact, when she was in high school, she used to compete in soccer and softball for the Youth and Government. As a high school soccer player, Raine was the winner of the MVP Defensive Award, Junior Varsity Soccer. Likewise, as a softball player, Raine had once won the Athlete of the Week.

Raine Finley Career: Participated In Fund Raising Program And Once Worked At A Radio Station

Talking of Raine’s career, she has been into social work. In fact, from 2013 to 2017, Raine worked for Community Service as a partner fundraiser for Children’s Hospital and other boys and girls clubs. The young adult often participates in raising funds for the community. As such in late 2017, she was interning in a 4-months program for a 92.9 Kjee Radio Station in the Santa Barbara, California Area.

During those periods, her jobs include mixing different commercial breaks and keeping the time slots updated there. She also managed details of different contestant winners under the Radio station’s different programs.

After her internship ended at Kjee Radio Station, Raine started working as a waitress at Delores Park Cafe in San Francisco Bay Area where she worked for around eight months.

What Is Raine Doing Now?

Raine as mentioned is now working as an intern for Warner Bros, Entertainment in Burbank, California. She is also studying ADR mixers, sound designing, and music supervision.

Raine Finley’s Mother, Tawny Was Married Twice; Who Were Her Husbands?

Raine’s parents, Chuck and Tawny were married from 1997 to 2002. They ended their courtship after Tawny faced the accusation of committing domestic violence against Chuck.

Before, Chuck, Raine’s mother, Kitaen was briefly married to Coverdale, lead singer for the British heavy metal band Whitesnake from 1989 to 1991.

The police had charged her with a misdemeanor after arresting her on October 22 of that year. Kitaen, however, pleaded not guilty and was scheduled for a pretrial hearing in May 2021.

The Malibu actress, though, died before the hearing could take place. After their mother’s death, Raine and Wynter paid tribute to her memory and thanked fans. The Californian-born actress’ two daughters on their late mother’s Instagram wrote,

“We miss her and love her and know her legacy will live on forever. – Wynter and Raine.”

Five months after the death of Raine and Wynter’s mother, Tawny, the Orange County Coroner’s Office confirmed to Fox News that Chuck’s ex-spouse died from dilated cardiomyopathy, a common type of heart disease.

The autopsy ruled the manner of death natural. Further reports suggested other significant factors that caused the death of Tawny were mild coronary atherosclerosis and the medications mirtazapine, mirtazapine metabolite, alprazolam, acetaminophen, pregabalin, and hydrocodone.

Raine’s elder sister said she had a big sense of relief to know the death of her mother was natural. As for Raine, she said all that Wynter and she cared about was that their mother went peacefully. Finley and her sister also recalled how growing up, boys would often remind them of their mother’s iconic status by blasting “Here I Go Again.”

Raine said, “My mom was so amazing.” She added how the Witchboard actress was a great sister, friend, and artist.

Raine’s late mother, Tawny appeared in the E! Entertainment’s reality series Botched during its season 4 finale asking Dr. Dubrow and Dr. Nassif for some help after she’d had quite the journey with her breast implants in her life.

In the past, she had had six boob jobs and had spent more than $200,000 on breast augmentation surgeries.

The doctors performed the surgery and removed Kitaen’s old breast implants, then re-formed them using her remaining breast tissue. During a post-op inspection, the doctors had to attach medicinal leeches to Tawny’s nipples and increase blood flow.

Does Raine Finley Have A Boyfriend?

While it is unclear in the present who she is dating, Raine back in 2013 had posted a picture of a boy (assumed to be her boyfriend) on her Facebook with a caption, hi + a red heart sticker. That, however, would be the only time, Raine mentioned him.

Five years later in March 2018, Finley once again posted a picture of herself standing by the side of a boy though it is unknown if it was the same guy she introduced to her Facebook friends back in 2013.

Though this time, she didn’t throw any love-themed sticker but only wrote,

A beautiful view of Downtown LA in the back.

And nothing else. It never came to light what sort of relationship she was having with the guy with glasses.

How Rich Were Raine’s Parents, Chuck Finley, And Tawny Kitaen; Their Net Worth

Although both of Finley’s parents, Chuck and Tawny were illustrious in their respective lines of career, they had a significant gap in their financial standings.

The late music video actress didn’t have any definitive quoting of her net worth, she though is alleged to have had around hundreds to millions of dollars of wealth.

Her ex-husband, Chuck, on the other hand, popularly is reported to have monetary belongings worth here & there $30 million. He clearly and volubly is richer than his late former spouse.

Whatever the case, it is not by much debatable that their daughters grew up in a rich household. As for Raine Finley’s own net worth, it might be quite a while before she starts making money anywhere near her millionaire parents.