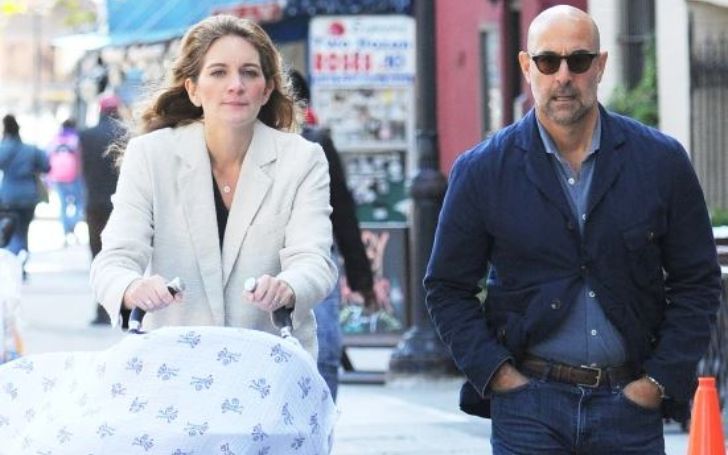 Matteo Oliver Tucci is the first child of the Burlesque actor, Stanley Tucci, and his English wife, Felicity Blunt. Matteo is apparently the second big thing Tucci experienced after the tragedy he faced with the death of his wife, Kathryn Spath or Kate.

The birth of Oliver was not a new thing to Tucci; the actor had a good idea of what it takes to be a dedicated and involved parent. Despite his busy schedule as a Hollywood actor and producer, Tucci always shows up for his children.

While Stanley is extremely private when it comes to his children, especially his younger ones which definitely include Matteo, he has given some glimpses inside his life as the father of his youngest son and his other children.

Read through all of them with some other facts about the youngest son of Tucci in the write-up below.

Matteo Oliver Tucci Was Born In The Mid-2010s

The first child of Tucci and Felicity, Mateo Oliver was born in Jan 2015. The now 7 years old Matteo’s name is the Italian form of the name Matthew.

Matteo’s parents, Tucci and Blunt, who have an age difference of 18 years, met before the premiere of The Devil Wears Prada in 2006. After Stanley’s first wife, Kate died, he saw Felicity at her sister Emily’s wedding to the Office actor John Krasinski.

The now 61 years old Tucci then went to England to do a movie, and then he and Blunt started dating. Matteo’s father proposed a year later during a trip to Berlin in Nov 2011.

Tucci and Felicity quietly wed the following year in August 2012. While it was the second time Stanley walking down the aisle, it is unknown if Felicity was previously married.

They held a more formal get-together in London Middle Temple Hall in September, a month after their secret wedding. The subsequent reception took place at L’Anima restaurant.

The guest list included Steve Buscemi (who served as best man), Oliver Platt, Julianne Moore, Meryl Streep, and the actress, Emily, and her husband John Krasinski. And in October Tucci and Felicity announced they were expecting their first child, Matteo. The couple, now the parents of five, split their time between the states and the UK.

Since 2005, Matteo’s mother, the 40 years old, Felicity has worked as a literary agent at the talent agency Curtis Brown.

Tucci and Kate, a social worker tied the knot in 1995 and were together for almost 15 years. The union ended with Kate dying of breast cancer in 2009.

Though Stanley went to despair after his wife’s death, he said his heart broke more for their kids because they had to grow up without their mother. Matteo’s eldest half-sister and one of Tucci’s twins, Isabel Concetta Tucci has lived her life out of her father’s Hollywood spotlight for the most part.

In addition to making extremely rare public appearances with Stanley, Isabel is not present on any social media accounts. Matteo’s older half-brother, and Isabel’s twin brother, Nicolo is also an actor and according to IMDb, made his acting debut in the 2019 TV mini-series MotherFatherSon.

The seven years old’s other half-sister, Camilla Tucci, who was born in 2002, while reportedly interested in acting, is yet to make her debut in any major films. Matteo’s younger sister and Stanley’s youngest daughter, Emilia Giovanna Tucci was born in June 2018.

Of Matteo’s mother, Felicity being a stepmother to his children from his first wife, Tucci once said how it was not easy to find somebody who was going to take on three teenagers [twins Nicolo and Isabel and Camilla] and a widower.

Tucci says Felicity marrying him was a lot – as a challenge that she was willing to take nonetheless. In an interview, the Margin Call actor said his second wife cares for his and his late wife’s kids as if they are her own, and added, to her, it was a tough role.

Stanley admits to feeling “fortunate” that Felicity is such a loving stepmom to his older children.

A couple of years after he became the father of Matteo, Tucci while talking to Guardian in 2017 said fatherhood with him was great. Tucci stated throughout Matteo’s babyhood, he was much calmer.

He, though, said it was a little tougher when he had to bend down to pick him up.

Matteo Oliver Tucci Is The Nephew Of Actress Emily Blunt

Through his mother, Felicity, Matteo is the niece of A Quiet Place actress, Emily Blunt. As a matter of fact, Matteo’s father Tucci, and his aunt, Emily worked together in the 2006 film The Devil Wears Prada.

Emily played the harsh senior assistant of a major fashion magazine editor while Tucci starred as Nigel, a sharp-tongued yet supportive art director. As mentioned, Matteo’s aunt, Emily is also the wife of actor John Krasinki; the two are parents to two daughters, Hazel and Violet.

While talking to Graham Norton, Stanley Tucci in May 2020 revealed his then five-year-old son, Matteo had adopted “posh” mannerisms and the Supernova actor had no idea why.

Tucci to Graham Norton talking about what his life during lockdown looked like at his home in London with his wife said,

“Matteo is the one who’s become weirdly very posh? We don’t know why he’s so posh. My wife isn’t really posh, she speaks eloquently. I just don’t get it.

Felicity’s husband also said how Matteo had become the kind of kid who if couldn’t find things would say, ‘It can’t just have vanished.’ The New York-born actor additionally admitted to his and Felicity’s son calling him butler, and remarking him by saying,

‘Who’s the American guy? Why is he so crass?’

Much like his late wife, Tucci too battled cancer in the late 2010s. The actor, in March 2022, revealed to People that he was “incredibly lucky” to be alive after his cancer diagnosis in 2017, which led him to undergo a 35-day radiation treatment plus an additional seven sessions of chemotherapy.

As a result of those treatments, Tucci lost his sense of taste and smell to the extent that he was unable to eat and had become dependent on a feeding tube.

Prior to receiving an accurate diagnosis, Stanley Tucci said he spent two years living with extreme pain in his jaw. While he apparently had a scan, the scan missed it. A correct diagnosis later revealed Matteo’s father had a three-centimeter tumor at the base of his tongue. The actor says the tumor, however, didn’t metastasize. These days, the father of five is cancer-free.

How Rich Is Matteo’s Father, Stanley Tucci; What Is His Net Worth?

For someone who has become a mainstay face in Hollywood, Matteo’s father, Tucci is certainly a rich man. And it seems more than believable that he has an estimated net worth of around $25million most of which he seemingly procured from his role as an actor, producer, and director.

In addition, he is also the owner of several restaurants in and outside the US.