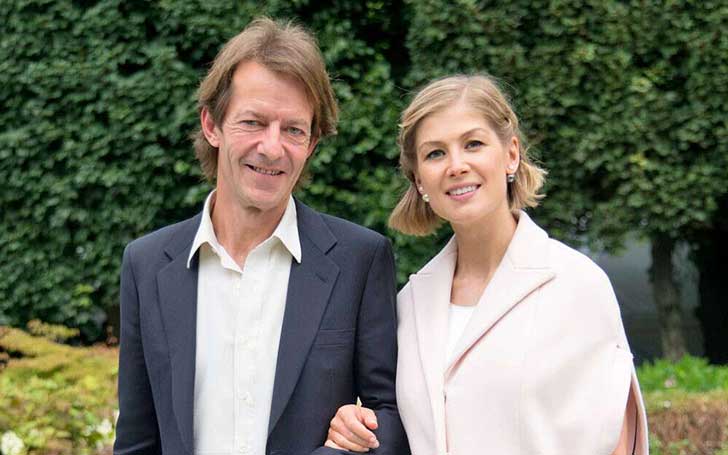 If you have been following the British actress for a long time, then you might have heard her giving credit to her partner, Robie Uniacke for her well-managed acting career. Robie Uniacke is a British businessman and mathematical researcher. Besides, he is famous as the long-time partner of British actress Rosamund Pike.

Pike started her career as a theater actress in the plays like Romeo and Juliet and Skylight. She later grabbed international recognition after her work as Miranda Frost in her debut movie, Die Another Day. Besides her acting, her relationship with her longtime partner, Robie has been a matter of talk for a long time.

But, if you don’t know anything about Robie Uniacke and his relationship with Pike then you are at the right place. Here we are exploring every part of the British businessman.

Robie Uniacke Is In A Relationship with Rosamund Pike

According to Bustle, Robie Uniacke started dating actress Rosamund Pike in late 2009. Having gone through a couple of bad relationships, both of them found each other fascinating and advanced their relationship pretty quickly. Their 18 years of age gap never became an issue for them, rather it gave maturity to their relationship.

The long-time partners have experienced parenthood twice. They have given birth to two sons together. Pike gave birth to the couple’s first son, Solo Uniacke on May 6, 2012, and their second son, Atom Uniacke on December 2, 2014.

Robie and Pike have been together for more than a decade, however, they are still taking their time to become husband and wife officially. After giving birth to her first son, Pike said that it was interesting to break the rules by having a baby out of wedlock.

Meanwhile, her partner, Robie is also not a fan of marriage. He has been spotted wearing t-shirts with quotes like “marriage is gay,” which is quite racist, to say the least.

How Did Robie And Rosamund Meet?

The duo first met back in 2009 at a soiree after they were introduced by a mutual friend. They fell for one another right in their first meeting and began dating. The couple has since been together.

Before dating Rosamund, Uniacke was married to the Pride & Prejudice actress, Emma Howard and also had a child with her. He married Emma Howard, the daughter of the late Earl of Carlisle in 1983. At the time of their marriage, Robie was 22 years old while Emma was aged 30.

According to The Famous People, Robie and Emma gave birth to a child, a son, Robie Jonjo Uniacke. Unfortunately, they couldn’t stay happy with their married life for a long time and divorced in 1988. During the last half of their marital life, both Robie and Emma had to be rehabilitated due to his heroin addiction.

Actress Rosamund Pike stayed in a couple of serious relationships before she found the love of her life, Robie Uniacke. She started dating English actor Simon Woods while they studied together at Oxford. They dated for two years. Woods later identified himself as gay and as of now, he is in a relationship with Christopher Bailey.

Later, Pike started dating film director Joe Wright. She met Joe on the set of the 2005 movie Pride & Prejudice in which she played a lead role. After a couple of years of dating, the ex-pair reportedly became engaged in September 2007.

Robie came to the limelight only after he started dating Rosamund Pike. Hence, details surrounding his early life and parents are a little murky. He was born in the United Kingdom in 1961. He holds British nationality.

Talking about his education, Robie studied at Eton College in Windsor, England. He developed a keen interest in mathematics since his early childhood days and he pursued his interest in his adulthood. However, he hasn’t talked much about his work as a mathematics researcher.

Uniacke’s now-girlfriend Rosamund Pike started her career on television in 1998 with the role of Celia in the television film A Rather English Marriage. She made her feature film debut in 2002, as Miranda Frost in Die Another Day. Since then, she has worked in dozens of films, including Doom, Fracture, Gone Girl, and A Private War.

Rosamund Pike’s partner Robie Uniacke is a successful businessman, but his work and earnings are not revealed in the media. While talking about her, she has a net worth of around $10 million in 2022. She has earned her riches from her extensive career in acting.

She has given more than two decades of her life to acting. Her acting career not only earned her fans and followers from all over the globe but also helped her live a life of a celebrity with a handsome net worth.