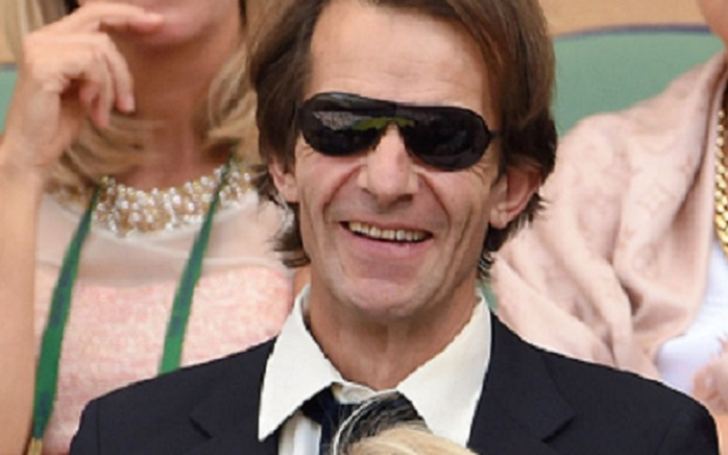 Robie Uniacke is a businessman and an accomplished mathematician. He hit stardom because of his high-profile relationship with the Academy-Award nominated actress, Rosamund Pike. Although the lovebirds share a huge age gap, their relationship is going pretty strong from the beginning.

Besides, both Robie, a former cocaine addict, and his long-time partner Rosamund, who shares two kids, went through two failed relationships in the past. The businessman also shares four children with his ex-wives.

Who is Robie Uniacke?

Robie is a mathematician by profession. The precocious pupil was always interested in the subject throughout his school and college years. His strong passion and dedication to the subject also made him one of the finest mathematicians. He then went on to work in several major roles in different companies.

Aside from that, Rosamund Pike’s yet-to-be husband is a businessman too. He worked as a director of a company named Pale Fire Ltd for many years before his suspension in 2016 for four years.

Company Bankruptcy: Jamie Was Banned from Being a Director for Four Years

Uniacke joined the IT consultancy company, Pale Fire Ltd the same year it was established in 2010. He served as a director of Pale until the businessman was forced to leave his position in 2016. It all happened after Robie failed to pay nearly £200,000 ($278,761) to the taxman. The same year, the company also filed for insolvency and subsequently dissolved.

According to the liquidator’s report, Uniacke had overdrawn £133,000 (approx $185,414.63) on his bank account. He has since remained quite grounded regarding his business endeavors.

What is Robie Uniacke Age? Details on His Parents and Education

Robie is a 60-year-old. He was born in 1961, in the United Kingdom. He is the son of Jennifer Sally Cunningham and Robie David Corbett Uniacke. Robie belongs to British nationality and has a Caucasian ethnicity.

As for his education, Uniacke graduated from Eton College in Windsor, England. Shortly after his graduation, Pike’s partner embarked on the business world.

How did Robie Uniacke and Girlfriend Rosamund Pike First Meet?

The power couple first acquainted through their mutual friends shortly after Pike’s break-up with her former fiance Joe Wright in around 2008. But the couple started dating a year after in late 2009.

Their dating rumors first came to the media when the then-new duo appeared together in Canada. There, the ‘Die Another Day’ star Pike was filming a Canadian drama Fugitive Pieces. According to Daily Mail, the duo started dating in late 2009.

One of their close friends, at the time, told the tabloid, “Things are quite serious between them. She says they are very happy but everyone’s worried as Rosamund tends to go for the wrong guy.”

It’s been over a decade that the couple has been in a wonderful relationship but surprisingly they are yet to tie the knot. Judging by their strong commitment towards each other and the strong bond they have been sharing for years, it looks like there is no hurry to get married.

The Couple has a huge Age Gap

Robie is around 19-years Rosamund’s senior. Despite that, the happy couple is yet to show any signs of slowing down. Talking about the couple’s age gap, Pike told The Telegraph,

“The idea that you go for an older man because you think you’re less likely to be left by him, that’s the biggest pile of crap ever. I have the good fortune of living with a very fearless person, which has been wonderful. It checks me.”

The actress also describes her man as “the most interesting person I’ve ever come across.”

In addition, Pike, who went through two failed relationships in past, said that her “astute” boyfriend also helped her out professionally.

“I have a very clever partner who’s got a very astute mind and is very, very well-read and articulate and ruthless about how something I do might play out on screen.”

‘My tendency is to identify with a character and imagine there is more on the page than there is. He’s quite good at putting a check on that.’

Uniacke and Pike are proud parents of two children. They welcomed their first child, a son named Solo Uniacke on 6 May 2012. She was filming for the movie, Jack Reacher at the time of her pregnancy. The duo became parents for the second time when Rosamund gave birth to their son Atom Uniacke at home on December 2, 2014.

The talented father Robie, a bilingual with a fluent grasp of British and Chinese, also taught the Mandarin language to his two children.

Robie Was Married Twice: Take a Look at His Children From His Previous Marriages

Before meeting Pike, Robie was married to two women in the past. He first tied the knot with Emma Howard, the daughter of the late Earl of Carlisle, in 1983. At the time, Robie was 22 and his wife Emma was 30. They both were heroin-addict and subsequently got treated for heroin addiction.

The former flames also share a son named Robie Jonjo Uniacke. Their relationship didn’t sustain for long and they divorced in 1988.

For the second time, the accomplished mathematician went on to marry an interior designer Rose Batstone. Nonetheless, Uniacke’s second marriage was also dissolved in divorce after a couple of years into their relationship. But, neither Rose nor her ex-husband Robie has ever disclosed why they split.

The exes have three children Hector, Olive, and Florence. Their daughter Olive is a close friend of Daniel Radcliffe, a British actor. She has also worked as a production executive and assistant for dozens of movies and TV shows. Her on-screen credits include The Other Side of the Door, The Autopsy of Jane Doe, and more.

Like her current boyfriend, Pike was involved in a few relationships in the past. The actress first dated Simon Woods, an English actor. They were in a relationship for a couple of years before they went their separate ways.

She was then linked to Joe Wright, a director. After some time, the two got engaged but it couldn’t go further as the now-exes called off their engagement in 2008.

What Is Robie Uniacke Net Worth?

Robie’s net worth stands at $2.5 million in 2021. The major source of his income is his mathematician job as well as many business endeavors. Additionally, his partner Pike has a $6 million fortune. She mostly racks a significant portion of her net worth from her acting career.

The duo currently resides in their Georgian home in London along with their kids. It was built in 1930.