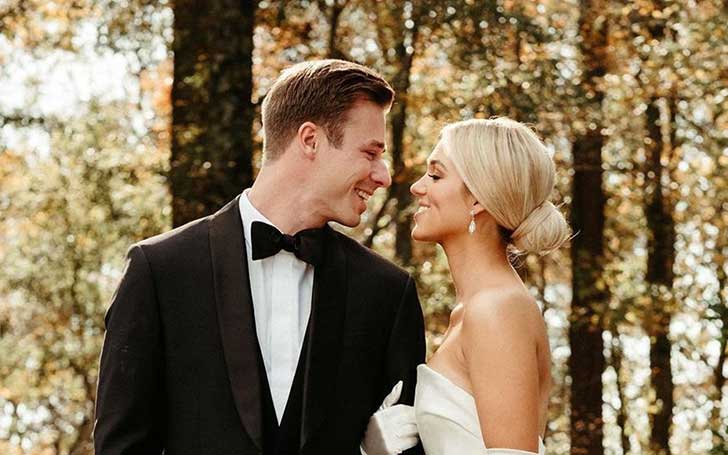 Sadie Robertson is very well-known for her appearance on the A & E show Duck Dynasty. The reality star is 24 years old as of 2022 and she has already been married. In fact, Robertson lives a happily married life with her husband Christian Huff since 2019. The Duck Dynasty star got married at a pretty young age and she appears quite satisfied with her decision.

Robertson suffered a couple of unsuccessful relationships before she found her husband, Huff. And the couple became serious soon and tied the knot within two years.

Let’s see Sadie Robertson and Christian Huff’s cute love story. Besides, let’s talk about Robertson’s past relationships in the sections to follow.

Sadie Robertson and Her Husband Christian Huff Married in Louisiana

Actress Robertson and her spouse Huff got married on 25th November 2019 in Louisiana. The lovebirds said “I do” at her family’s farm in front of more than 600 guests and family members.

Pastor Louie Giglio officiated their matrimony where they exchanged their traditional and personal vows on a transformed tennis court. People reported their “unique and fun” decision represented their love of the sport.

Meanwhile, Robertson talked about their decision to transform the tennis court with People before their big day. There she said:

“Christian and I both love to play tennis and every time we’re home, we play tennis on this court. So we’re like, ‘Well, what if we transformed the court?”

“So we’re taking off the net taking off everything. We’re laying down AstroTurf and lights everywhere all over the fence and white roses. So it’ll actually feel like this nice garden.”

Following their wedding, Sadie and her newlywed husband Huff shared several photos from their nuptials. The actress went on to share many memorable moments for weeks.

On March 18, 2020, Sadie shared a video from their big day on her Instagram. “I love these visual reminders of the best day of our life,” she wrote alongside the video. Here is the video:

Where Did They Go For Honeymoon?

Following their private yet romantic wedding in Louisiana, Robertson and her newlywed husband Huff headed to Cabo San Lucas, Mexico for their honeymoon.

The ecstatic couple shared lots of photos from their romantic getaway. Their first picture showed Robertson and her shirtless hubby posing barefoot in the sand.

In the second post, Huff was seen enjoying quesadillas and chips on the beach.

While Sadie Robertson is pretty open about herself in the media, it turns out her husband Christian Huff is super-private. However, a few things about Huff is known to the media. Huff was born and raised in Niceville, Florida. He has a brother, Chance Huff.

Thanks for being the best parents either of us could ever ask for and showing us what it truly means to serve others and walk with Christ”.

Meanwhile, Huff is also a religious person just like Sadie. He frequently shares biblical quotes on his Instagram stories. Moreover, his Instagram bio reads: “If it breaks God’s heart, why do you think it will fulfill yours?”

After around nine months of dating, Sadie Robertson and Christian Huff got engaged in June 2019. Robertson announced their engagement via Instagram on June 10, where she showcased their romantic proposal in a video clip.

Christian Huff set up a chair, pillows, and candles under a tree for their outdoor engagement. In the video, Huff can be seen carrying his girlfriend in his arms before he got down to one knee and proposed Sadie to be his spouse.

Meanwhile, it was an extra special occasion for Huff as he celebrated his birthday on the day he popped the question. And they were celebrating their joint birthday party as they share a birthday week.

Shortly after their engagement, Robertson had an interview with People. In the interview, the reality star said that she was aware that Huff was going to propose to her soon. However, she said she didn’t think it would come at their joint birthday party.

Robertson went on to say:

She also said she was delighted after she knew she and Christian share a birthday week. “Ever since I found this out I was like, ‘Oh, we are going to have the most epic birthday of all time,” Robertson concluded.

Actress Sadie Robertson met her future husband Christian Huff during her trip to Florida in July 2018. Sadie went to Florida for crab hunting with her friends. Christian was Robertson’s sister’s friend for around a year before they met. Moreover, Robertson had followed most of Huff’s family members on social media except him.

When she was in Florida, Huff’s cousin messaged her so that they could meet and hang out together. Instead, Robertson called her to join them on crab hunting. That night, Huff’s cousin showed up where he was also among time. This was how Robertson and Huff met for the first time.

Robertson said she was stunned by Huff’s looks and tried to avoid him all night. She said when she saw him she was like: “‘Oh hello there.’ He was too cute. I was like shoot.”  She further reminisced,

“So I actually tried to avoid him for most of the night because I did not want to get in a relationship and I was like, ‘He is too cute to talk to and not want to date.’ So it was kind of funny”

Later that night, Huff approached Robertson and jokingly said that she had followed every one of his family but him, said Robertson. Robertson also said Huff had messaged her on Instagram over a year before they met. Ultimately, Robertson followed Huff on Instagram and they started talking on DM.

Even though Sadie Robertson was fascinated by Huff’s appearance at the first meeting, she was not ready to date him too early. They talked on DM for over two months before they went on their first date. As a matter of fact, after around a month of DMing, Huff had asked her to go on a date with him but she denied it.

Robertson said she needed some more time. They talked for one more month before she showed the green flag to Huff’s proposal.

Following the breakup, the Duck Dynasty star told Us Weekly that the ex-pair was still on good terms after their separation. “We broke up. He’s an amazing guy and I wish him all the best. We’re friends. It just didn’t work out,” Robertson told Weekly.

In April 2018, Robertson had confirmed her relationship with North in a social media post.

In 2014 Robertson started dating Blake Coward and remained together for around two years. In April 2016, Robertson revealed she and her then-boyfriend Coward had separated around a month ago. She announced her separation with Coward in a YouTube video in which Robertson also shared her thoughts on her breakup.

After her breakup with Coward, she was briefly linked with former football quarterback, Trevor Knight.