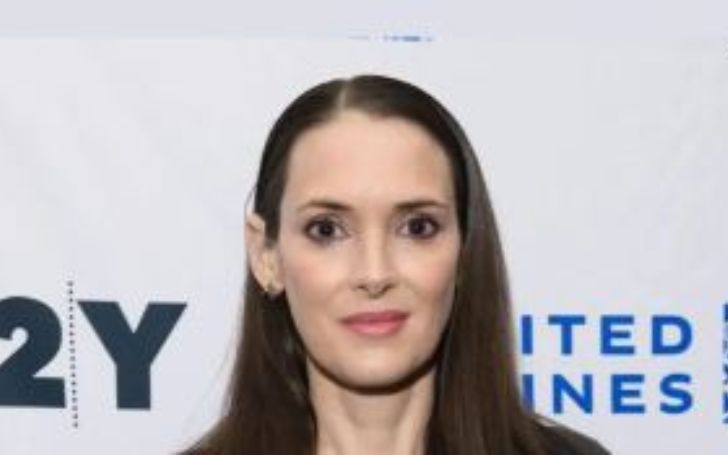 Sunyata Palmer is an American-born make-up artist. She is known for her work in movies like Meet the Applegates, Transylvania Twist, and others. But, Sunyata came to the limelight as the half-sister of the actress Winona Ryder.

Despite being a celebrity sibling, Sunyata has managed to live a life away from the media. Even though we do have some information on her professional life, her personal life seems to be out of grasp. People are constantly on the run to learn more about the Stranger Things actress’ mysterious sister.

Today, this article will be all about Sunyata Palmer including her age, siblings, career, net worth, and many more. Let’s get started!

Sunyata Palmer Is The Daughter Of An Actress: Details On Her Age, And Siblings

Sunyata Palmer was born on October 5, 1967, in San Francisco, California, USA. As of 2023, Palmer is 55 years old. She is the daughter of the actress Cynthia Palmer (mother), and John Palmer (father).

Although her parents have kept their short-lived marriage behind the curtain, we do know some parts of Sunyata’s early life. After the split, her mom walked down the aisle with American archivist Michael Horowitz. The couple also shared two kids Winona Ryder (b. October 29, 1971) and Uri Horowitz (b. 5 February 1976).

For some years, Sunyata and her brother Jubal lived in their step-dad Michael’s place in New York alongside their mother Cynthia, and half-siblings. During that time, Sunyata’s used to go out with her new family all the time.

Sunyata is very close to her siblings, mainly with her half-sister Winona. The two sisters would always be together. Unlike others, Winona didn’t have a strong heart because she had fear of everything. The fear even got worse after the day she and her sister Sunyata were followed by some people.

The Mermaids star still has little doubt of what their intentions were and has also said, “God Knows how many attempted kidnappings there are.”

As per the book Winona Ryder: The Biography, her first name “Sunyata” comes from the Tibetan Book of the Dead.

What Does Sunyata Palmer Do For A Living?

As mentioned above, Sunyata works as a make-up artist. So, it might be her full-time profession as she hasn’t revealed any other career to the media, so far. Till now, Palmer has worked as a make-up assistant in three movies named Welcome Home, Roxy Carmichael, Meet the Applegates, and Transylvania Twist.

But, we aren’t saying that Sunyata has only worked in these three films. She is probably working behind the camera. It seems like she has preferred not to let anyone know about her work in public. Whatever the case is we hope Sunyata is doing well in her respective profession.

Sunyata hasn’t shared anything about her relationship whether she is married or romantically linked with someone. Similarly, she is a very secretive person when it comes to her personal life. The same thing can be said about her love life. Hence, as of 2023, Sunyata’s relationship status remains single.

On the other hand, her half-sister Winona Ryder isn’t like her, in fact, the Stranger Things actress is leading a very blissful relationship with the fashion designer Scott Mackinlay Hahn. The couple has been living together for over a decade.

However, they are yet to be married even though they are dating for eleven years. Sunyata’s sister said she would rather never have a husband than get divorced in many interviews. As per ET Online, in an interview with The Edit, Ryder has said the reason is to be parents’ relationship she is not willing to get married anytime soon.

Furthermore, in 2016, Winona said she would rather live unmarried than get a divorce.

“Marriage? I don’t know. I’d rather never have been married than been divorced a few times. Not that there’s anything wrong with divorce, but I don’t think I could do it if that was a possibility.”

Sunyata might be living a peaceful life alongside her family far from the media. There aren’t any news updates on Sunyata’s current lifestyle. Not even a single online tabloid has talked about Winona’s half-sister’s current residency.

Talking about Palmer’s profession as of 2023, as said before, all of the online sources have suggested she is still working as a make-up artist. But, we will not know until Sunyata herself comes up front in the media to talk about the matter.

Net Worth: How Much Fortune Does Sunyata Palmer Hold?

Sunyata Palmer’s net worth is yet to be revealed. So, as of 2023, it is still unknown. On the other hand, her half-sibling Winona Ryder has an estimated net income of $18 million. Ryder makes her money as an actress.

Is Sunyata Palmer Active On Any Social Media Platforms?

Sunyata is not active on any social media platform. On the other hand, her half-sibling Winona Ryder is active on every social media handle. She has over 600k followers on Instagram and 4 million on Facebook.