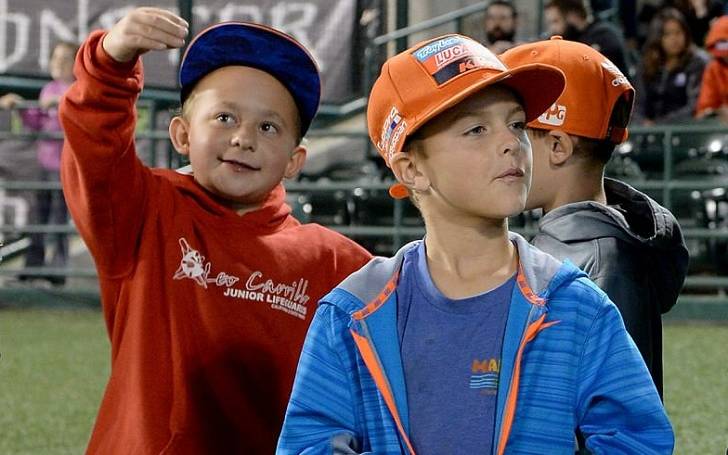 Sullivan Patrick Dempsey is an American star kid and media personality. He is the son of Grey’s Anatomy star Patrick Dempsey and his decades-long partner makeup artist Jillian Fink. Both of Sullivan’s parents are quite successful in their own respective ways. While Dempsey’s father is known for movies like in the Mood, The Practice, Once and Again, and Enchanted, to name a few, his mother is popular for her work in Extra, The Crew, Nosebleed, and others.

The rising star was born in February 2007 alongside his twin brother Darby Galen Dempsey. At just 15, the twin brothers have already appeared on the cover of big magazines like Vogue.

How Old Is Sullivan Patrick Dempsey In 2022? Details Of His Early Childhood

The star kid Sullivan Patrick Dempsey is 15 years old as of 2022. He was born on 1s February 2007 in Los Angeles, California to celebrity parents Patrick Dempsey and Jullian Fink. He holds an American nationality and is of German, English, Scottish, and Swedish ancestry.

As mentioned above, Dempsey was born alongside his twin brother Darby Galen Dempsey. He also has an older sister named Tallula Fyfe Dempsey born on 20th February 2002. She is currently attending college in Washington.

Sullivan And His Twin Brother Were Delivered Two Weeks Early

The father of three Patrick once said that he felt a little overwhelmed when he found out that they were adding two bundles of joys into their family.

The twins were delivered two weeks early by c-section procedure from their actual given birth date. Patrick cut both of his son’s umbilical cords.

Moreover, just a few weeks after the twins were born, Sullivan Patrick Dempsey’s father Patrick starred them on the cover of People magazine. During an interview, the father of three talked about his experience with the twins saying,

“Here’s the cycle: They wake up, they cry, they go to the breast, they eat, they poo or pee, you change a diaper and they go back to sleep. It’s much harder for my wife than for me because she’s pumping or nursing.”

As per Patrick, Sullivan wants to be an actor when he grows up while Darby is passionate about soccer. As of this writing, the twins have already made their red carpet appearance a few times with their parents.

Who Are Sullivan Patrick Dempsey’s Parents?

As mentioned earlier, Dempsey’s father Patrick is a Hollywood actor. He is well known for Grey’s Anatomy and Enchanted. He began his professional career in the 1985 film The Stuff.

So far, Patrick has starred in several films and shows like Made of Honor, Flypaper, Bridget Jone’s Baby, Lucky 7, Will & Grace, and more.

He is all set to appear in Ways & Means and reprise his role as Robert Philip in an upcoming rom-com Disenchanted.

Back in 2019, she even featured her twin sons to model for her hair pomade collection called Roadie. Also, Jill has worked with top celebrities like Bradley Cooper and Julia Roberts.

Dempsey’s Parent’s Relationship Details- How Did They First Meet?

His dad Patrick and mom Jillian first met at a hair salon where his dad had gone to get a haircut. During an interview with People, Jill recalled her first meeting saying,

“I was shocked when he came in for an appointment but at the same time, I was happy because he was so cute,”

And after three years of going to the same salon, Dempsey asked her out on a date immediately after finding out that she was single.

After dating for only three months the pair moved in together and eventually tied the knot. They wed at Patrick’s family farmhouse in Maine on 31st July 1999.

Patrick and Jillian’s decade-long marital life was not as easy as it seemed to be. After being married for almost two decades, Jill filed for divorce in January 2015 citing irreconcilable differences and seeking spousal support and joint custody of their children.

Likewise, the couple even released a joint statement saying,

“It is with careful consideration and mutual respect that we have decided to end our marriage,”

Though Jillian was all determined to part ways, Patrick was in no way ready to give up on their marriage at all. He decided to sacrifice his time on the race track and fully focus on mending his marital life.

That really paid off and after a few months of their divorce process, the partners were spotted holding hands and riding bikes together. They confirmed their reconciliation in May 2015.

Later on, Patrick told People about his almost-divorced experience saying,

“I didn’t feel like we had done all the work. And we both wanted to do that work. That’s where it started. I learned to prioritize. Our union has to be the priority. I wasn’t prepared to give up on her and she wasn’t either. We both wanted to fight for it.”

As for now, the couple has been married for over two decades and considers their marriage is a new beginning.

The 56-year-old actor is also an avid racer who has participated in several such as Rolex 24 Hours of Daytona sports car race, 24 Hours of Le Mans, Tecate SCORE Baja 1000 off-road race, and more.

Similarly, he owns the Dempsey Racing and co-owns the Vision Racing IndyCar Series team. He also maintains extensive sports as well as a vintage car collection.

Now that the twins are growing up, they join their father on the race track every now and then.

Prior to Fink, Dempsey was married to his first wife Rochelle ‘Rocky’ Parker. As per sources, the former couple first met back in 1984 when Patrick was just a rising star.

After being together for a while, they got married on 24th August 1987. Dempsey was just 21 and Rocky was 47 at the time of their marriage.

After seven years of marriage, they parted ways on 26th April 1994. They divorced due to irreconcilable differences. Also, Patrick later admitted to cheating on his then-wife.

Is Sullivan Patrick Dempsey Active On Any Social Media Platforms?