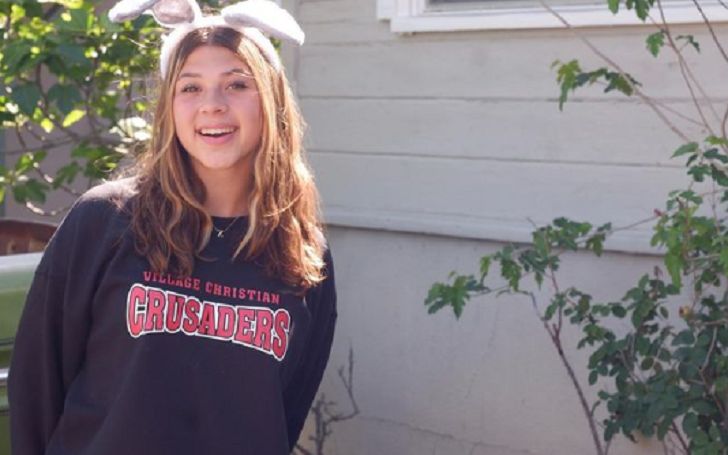 Zoie Laurel May Herpin is the daughter of former Full House star Jodie Sweetin and her ex-husband, Cody Herpin. While her mother is a well-known actress with numerous acting credits under her belt, her father is a transportation coordinator and set designer. Zoie’s parents married for a few years before their relationship dissolved.

Although her parents are no longer together, Zoie has shared a strong bond with both of them. She often appears on their social media handles. Besides, the star kid who is currently in her 8th grade also plays soccer for her school team. She has already won numerous local tournaments with her team too.

Well, here are several other intriguing facts about Jodie Sweetin’s daughter Zoie including her brief appearance in Fuller House, relationship with her parents, and more. Let’s check it all out!

How Old is Zoie Laurel May Herpin? Was Born Via C-section

As of 2022, her age is 14. She was born on 12th April 2008, in Los Angeles, California. Her mother Jodie Sweetin gave birth to her baby via C-section. Laurel weighed 8 lbs. 7 oz. and was 21 in. at the time of her birth. A representative for Sweetin said People,

“Jodie says that she and her husband and family are absolutely thrilled and in love with baby Zoie.”

The actress announced her pregnancy with the baby in September 2007 and revealed the baby’s due date was 6th April.

Back in April 2022, Jodie celebrated her daughter’s 14th birthday by posting a series of photos of themselves. She wrote in the picture,

“Zoie has grown up so much these last few years and I can’t tell you how PROUD I am of the young woman.”

The actress also described her daughter as, “helpful, kind, hilarious, generous, a good friend and So much more,” in her lengthy caption.

In the meantime, her father too posted a beautiful photo of his daughter on her big day with the caption,

“My ZoZo, I can’t believe you turned 14 today. Your mom and I are crazy proud of ya. Thank you for teaching me how to be a dad.”

Everything About Her Parents: Zoie’s Dad is a Transportation Coordinator

Unlike her actress’ mother, her dad isn’t such a frequent face in the media. He is a transportation coordinator who worked in several movies and TV shows including Dark Honeymoon (2008), Krerws (2010), and more. He has also worked as a set designer on numerous projects.

On the other hand, Zoie’s mother is an actress who rose to stardom following her longest TV role as Stephanie Tanner in the hit series Full House. She also appeared in its sequel Fuller House, which was aired on Netflix.

Additionally, Jodie appeared in numerous movies like Love Under the Rainbow, Myer Perfect Romance, and so on. In addition to her acting career, Zoie’s mother is also a TV host.

Her father Cody and her mother Jodie crossed their paths in early 2007 and the two began their relationship in May of the year. Zoie’s parents also didn’t waste much time to make things official as they exchanged their vows on 14th July 2007. Their wedding ceremony was organized at the Little Church of the West on the Vegas Strip, in Las Vegas.

Although the ex-duo looked perfect initially, their marriage started falling apart a year after their marriage, leading their nuptials to divorce. And the actress filed for divorce from her ex-spouse Cody in Orange County, CA in November 2008.

In her court papers, Jodie requested joint legal and physical custody of their 14-year-old daughter. Although Jodie’s ex-husband wasn’t agreed with her appeal as the set designer sought sole custody of their girl, the court later granted them equal custody of Zoie.

Furthermore, the Full House actress is also paying her ex-hubby $600 a month in child support.

Zoie Laurel May Herpin’s Life After Her Parents Parted Ways

Although Zoie’s parents’ divorce proceeding was quite dramatic initially, it later settled on a mutual understanding. So, because of their friendly and peaceful relationship even after their divorce, Zoie never have to prioritize her parents as the star kid is incredibly close with both of them.

The 14-year-old schoolgirl frequently makes her appearance on both of her parents’ social media profiles, especially on their Instagram.

Additionally, the star kid is also super close with her mother’s new fiance Mescal. In June 2021, Jodie uploaded a photo with her two daughters and new partner while watching a Dodger game.

Has a Half-Sister From Her Mother’s Third Marriage

Zoie has a younger half-sister named Beatrix, born in 2010. She came from her mother’s marriage with her third-husband Morty Coyle. The former flames started dating shortly after Jodie’s separation from Cody. And they married in March 2012, in Beverly Hills. Unfortunately, their marriage dissolved a year after their wedding.

Besides, the relationship between Zoie and her sista Beatrix is more like that any of the other biological siblings share.

Jodie Sweetin’s daughter Zoie currently studies in the 8th grade. She is also heavily involved in sports at school, especially plays soccer. Over the years, the 14-year-year old has played several local soccer tournaments around California.

In May 2018, her proud father Cody wrote on his Instagram his daughter and her school team became a runner-up over all the teams in their bracket. The tournament was held at Pleasant Valley Soccer Fields, in Camarillo, CA.

Similarly, Zoie is also involved in Krav Maga. In Sept 2018, her dad shared a photo of his daughter with her Krav Marga guru and other members of the fighting system. He also wrote in his post that her daughter “belted up In Krav Maga.”

Was Zoie Laurel May Herpin in Fuller House?

Yes, Jodie Sweetin’s daughter Zoie had a cameo on the sitcom Fuller House which was created by Jeff Franklin. She appeared in the season’s 2nd episode called “A Tangled Web.”

Like her, Beatrix also appeared in the 4th episode of the season “President Fuller.” The show also starred her mother and other stars like Candace Cameron Bure and Andrea Barber as well.

Where is Zoie Now? Her Life As a Celebrity Kid

As of 2022, Zoie splits her time often with her father and mother in California. Besides, being the daughter of such a famed actress Jodie, Zoie also has had quite a lavish lifestyle.

At present, her mom’s net worth is $2 million.

Some Quick Facts About Zoie