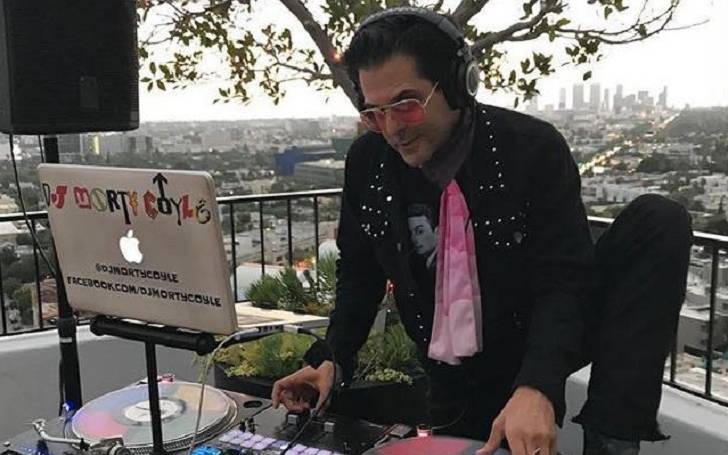 Morty Coyle (aka DJ Morty Coyleac) is one of the skilled DJs in Los Angeles, California with over 15-year of experience in Dajing and almost 30 years in the music world. He has worked as a DJ at almost every famed club based in Hollywood and has also done hundreds of high-profile parties. Coyle is currently the singer and songwriter of the band All Day Sucker.

But, on top of that, Coyle is better known as the ex-husband of Jodie Sweetin, an actress who is better known for her role in the ABC series Full House. The former flames married in 2012 and separated a year after their nuptials. What was the reason behind their divorce? Also, know about their battle over their child support.

Well, here are several other hidden facts you need to know about musician Morty. Let’s get started!

Coyle was born on 7th December 1968, in Las Vegas, Nevada. His age is 53 in 2022. Growing up in his hometown of Las Vegas, the ex-celebrity spouse belongs to American nationality and has Caucasian ethnicity.

However, the details of his family background aren’t available so far. On the other hand, his former wife Sweetin was adopted by her own uncle Sam Sweetin after her mom and dad weren’t able to care for their daughter when they were in prison at the time.

As for his education, Morty graduated from University High School.

What Does Jodie Sweetin’s Ex-Husband Morty Coyle Do For a Living? All About His Career

Morty is a DJ by profession. As we mentioned earlier, with several years of experience in DJing, the veteran artist can mix any genre of dance music from Hip Hop, Party Bangers, to mixing classic Rock n’ Roll.

As per his Linkedin profile, Coyle has worked as a DJ in numerous famed clubs in Hollywood, California. Furthermore, Sweetin’s ex has done several parties and private events for a number of popular celebrities.

In addition to DJing, Coyle has also been a singer and songwriter for the musical band All Day Sucker since April 1986. The classic pop band which formed in high school gave The Wallflowers their first gig at Gazzari’s.

The band has also released a handful of songs like Life in the Passing Lane, Nobody Somewhere, Land of Canyons, and more.

Before the former flames got hitched, they became parents first. Morty’s then-girlfriend Sweetin gave birth to their daughter named Beatrix Carlin on 31st August 2010. At the time, the proud dad told People,

“Jodie was amazing and is doing great. We are now the proud, excited parents of Miss Beatrix Carlin Sweetin Coyle.”

As per the reports, the baby girl weighed 7 lbs., 4 oz. and was 19 inches long at the time of her birth.

The Fuller House star Jodie’s rep Stella Alex announced that the actress was expecting her child with her boyfriend of one year in April 2010.

Morty Proposed To His Girlfriend At Her 29th Birthday Party

Jodie Sweetin’s then-boyfriend Morty popped the question in quite a surprising way. The veteran DJ actually proposed to his partner with 2½-carat oval sapphire, surrounded by 18 diamonds at her 29th birthday celebration in front of all their party guests. The party took place at the Kibitz Room in Los Angeles.

After getting a huge gift on her birthday, the actress told People, “It was a complete surprise. We are just thrilled and I am in shock still!”

The venue was already full of guests but Jodie didn’t have any idea about the plan. Besides, their then-5-month daughter also witnessed the big event.

They Announced Their Wedding A Year After It Happened

Talking about their marriage, Morty and her fiancee Jodie exchanged their vows in a private wedding ceremony in Beverly Hills on 15th March 2012. But, the duo revealed the two got married a year after their marriage.

“We had wanted to keep it quiet and intimate for a while, but felt that on our first wedding anniversary, it was time to share!”

Jodie also described their big day as “a wonderful, intimate celebration with each other and our families.”

Are Morty and His Wife Jodie Still Married? Their Short-Lived Marriage

Although their marital relationship was a smooth ride initially, it busted up after a little bit more than a year of marriage. Sweetin filed for divorce from her husband in Los Angeles, citing irreconcilable differences as the reason behind their separation.

In her court papers, the actress requested sole custody of their daughter Beatrix and the ownership of their 2000 Toyota Avalon.

Sweetin and her spouse Morty’s divorce proceedings took over three years to be finalized. Although Jodie initially sought sole custody of their girl, the court later granted the two equal custody of their daughter.

At the time, the tabloid reported the exes would also equally divide the income and assets they made as a married couple.

Are Morty Coyle and Sweetin’s Battle Over Child Support Ended?

The former flames who officially divorced in Sept 2016 were involved in the battle over monthly child support in 2021. It all happened after Morty’s ex-wife filed in court to mitigate the child support payments the actress pays to her hubby for their daughter. She used to pay $2,800 monthly to her ex-spouse as child support.

Jodie, 40, cited a huge fall in income after the Covid pandemic behind her reduction request. She also claimed the cancellation of the Netflix show was her huge loss.

But, her former hubby Coyle countered her request, saying that the actress had a lot of acting gigs in 2020 and was also making at least $200k at the time.

The DJ further said he took care of their daughter Beatrix while she was out for filming. He also claimed that he is unemployed at present.

But, the main question is now is their case still running or already over? Yes, they settled it by themselves without any court support. Afterward, the two notified the court they reached a private financial settlement, meeting Coyle’s demand for an increase.

As a matter of a fact, the actress already went through two failed marriages before it marked the third one with Morty. She first married Shaun Holguin, a police officer in 2002 and divorced in 2006.

For the second time, Sweetin tied the knot with Cody Herpin, a film transportation coordinator in July 2007 and divorced in April 2010. They also shared a daughter named Zoie from their marriage.

Where is Morty Coyle Now? His Love Life After Divorce

At present, the skilled DJ Morty resides in Los Angles, California with his daughter. Needless to mention, the father and daughter duo shares a great bond with each other. The doting dad has posted a number of photos of his daughter on his social media handles.

As for his relationship status after his divorce from his ex-wife, Morty has remained quite confidential. He has since never come out with his love life publically.

In the meantime, his former spouse is now engaged to her fiance Mescal Wasilewski.

What is Morty Coyle’s Net Worth?

His estimated net worth is $500,000 in 2022. He has mostly racked the abovementioned fortune from his career as a DJ and musician. Besides, his ex-wife Jodie has a wealth of $2 million. Her main source of income is her work in movies and TV shows.

Related: All You Need To Know About Jodie Sweetin’s First Husband Shaun Holguin