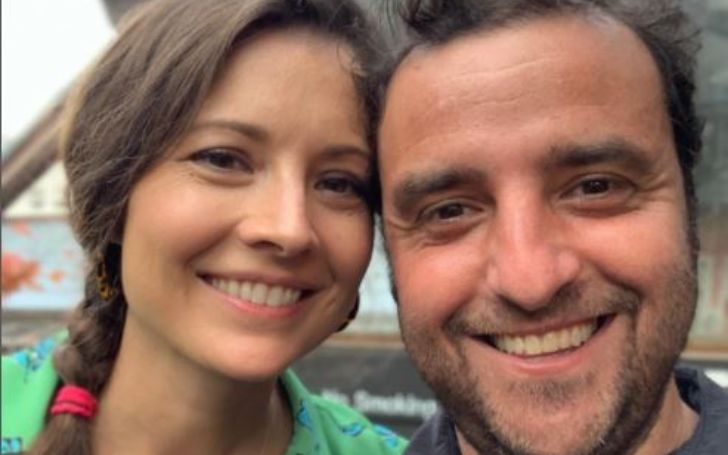 Vanessa Britting is an actress and a realtor who has a reputation for being a recurring character and cameoing in several notable series. People might have seen her as a random or a repeated face in shows such as Without a Trace (2002), The Unit (2006), and Big Breaks (2009).

What also cannot be missed is that Britting is the wife of actor/comedian, David Krumholtz. He is known for playing Charlie Eppes in the CBS drama series Numb3rs. With David, Vanessa is also the parent to a daughter and a son.

Know how Vanessa Britting became the wife of actor David Krumholtz; when did they actually start their relationship, what is Vanessa’s own story as an actress and all.

Vanessa Britting Is A Native Of New Jersey

Vanessa Britting was born Vanessa Almeda Goonan in Rockaway, New Jersey on August 30, 1980. She is the daughter of Michael Goonan, the frontman of a band, X-Tiki’s, & a musician.

She once disclosed her grandfather had Alzheimer’s. Also, instead of using her birth name, Goonan, Britting, a former student of Morris Knolls High School uses her grandmother’s maiden name, Britting.

Vanessa who is a few inches taller than her significant other at 5′ 8″ (1.73 m) studied theater arts at Montclair State University.

How Did Vanessa Britting Become An Actress?

She reportedly started doing theater and performing as a singer when she was about 10.

When asked when did she know she wanted to pursue acting, the New Jersey native in July 2016 to Visible Soul replied,

I had been doing theater and performing as a singer since I was about 10. But it was during a high school performance of a concert version of Les Miserables that I made the decision to major in a theatre when I went to college.

She also revealed her mother had instead hoped for her to become a Spanish teacher and teach at the high school from where she passed out.

Vanessa’s first-ever screen job was for the 2004 short movie called Snippets where she portrayed the character of Veronica. She then became one of the casts of the 2005 film, Walking the Walk (as Teri). That year, she also starred in another short movie, Gullible Gary Moves In (as Tracy).

Vanessa’s first-ever series role was a cleaning woman in the show titled, The Unit in 2006. After that, she appeared in another TV series, Girlfriends as some random woman. The year 2007, she guest appeared as Harper Simms in her husband’s show, Numb3rs, in an episode, Tabu.

During the same time, she was also a recurring cast in the CBS television soap opera, The Young and The Restless as Molly Doherty. Other series where she has briefly shown up include Desperate Housewives, Without A Trace, Marcy, Hello Ladies, The Protector, Back In The Game, and others.

She recently played Brandy, one of the leads, in director, Jason Ree’s comedy film, The Trouble With Muffins which is currently under post-production.

Besides acting, The Young and The Restless alum also co-wrote and starred in the short film, Big Breaks. In like manner, she has also appeared in independent films and comedy videos.

In addition to the entertainment industry, Ms. Krumholtz is also in the real estate spectrum. She first stepped into the world of housing business somewhere in 2018 becoming a sales associate for Weichert Realtors, Ridgewood, NJ.

In the meantime, the now 41-year-old actress is also serving in the sales team of Realtor at Prominent Properties Sotheby’s International Realty, also in Ridgewood.

The Rockaway-born former playwright actress, Vanessa Britting married Harold and Kumar actor David Krumholtz in May 2010. Prior to that, the couple had been dating for 5 years.

The two had originally planned to wed in 2009 with the star of CBS’s Numb3rs proposing to Britting in July 2008 in Paris. It was The Santa Claus star’s rep, David Lust who confirmed the news of their engagement to PEOPLE exclusively.

Lust at the time said, “The happy couple became engaged in Paris on a hiatus vacation last month and are beyond ecstatic.”

After about a 23-month-long engagement, the Numb3rs actor married Vanessa on Saturday in New York City on May 22, 2010. The nuptials took place at The Plaza Hotel.

People magazine once again was the exclusive source to know about the couple’s secret wedding. As per the source, they tied the knot in a non-denominational ceremony in the historic hotel’s terrace room in front of 180 guests.

Britting wore a wedding gown by Rivini. The aisle included 7-foot tall candelabras, garden roses, and vines. The ceremony ran for about 30 minutes.

It was the first wedding for both.

Four years on to their marriage, the Krumholtz couple had their first child, a girl, Pemma Mae Krumholtz in April 2014. Two years later the couple welcomed their second child, a son, Jonas in 2016. The family of four resides in Wyckoff, New Jersey.

Britting once said her husband to her has been the biggest influence on her work as an actor.

During an interview in July 2016, she stated how living with an actor husband, a working actor for most of his life turned out to be very informative to her. The Slice actress added seeing the journey of her children’s father up close has been very helpful to her.

Apparently, Vanessa and her spouse are always using each other to learn lines. The New Jersian thus maintains her partner inadvertently always coached her on most of her auditions. She thus declares him the single largest influence on her work and the one whom she trusts implicitly.

Although the mostly comic supporting actor, David Krumholtz is a millionaire by most accounts, the stats that might have represented his longtime wife’s net worth are hard to come by.

On one hand, Britting’s spouse’s fortune reportedly sits over $8 million, while on the other hand, there’s few to no viable mentioning of the Krumholtz’s spouse’s wealth specifics.

Though what can be safely assumed is the mother of David’s two children could very well be doing fine on her own in terms of finances and such.