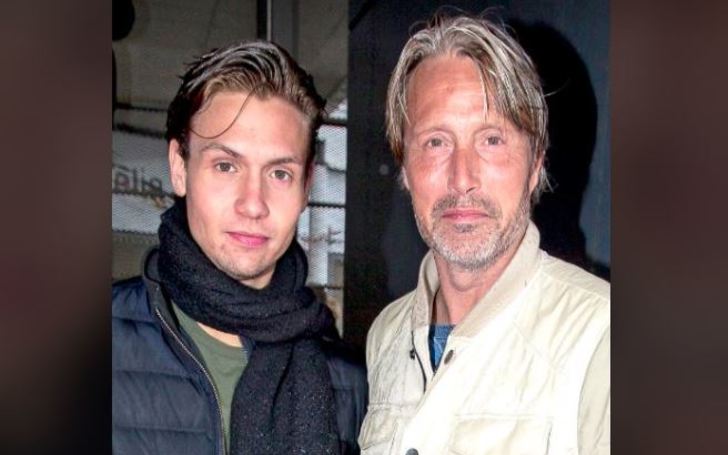 Carl Jacobsen Mikkelsen is the son of the Hanibal and The Hunt actor, Mads Mikkelsen and his long time partner/wife, Hanne Jacobsen. Carl is Mikkelson and his spouse’s second child.

Unlike his father, Carl is on a very different career path; serving his nation. While he looks eerily similar to his actor father, he hasn’t yet talked about his take on performing and cinemas.

Get to know about the millennial celebrity son of Mads Mikkelsen; his early life, his youth, professional, and some glimpse into his personal corners.

From His Young Age, Carl Jacobsen Mikkelsen Has Been An Outdoor Guy

Carl was born in 1997 in Denmark. When he was 15, Jacobsen moved with his mother and father to Toronto as Mikkelsen had to record the series Hanibal. Carl, therefore, studied his ninth grade, in Canada. Whilst staying there, he also practiced a number of sports in the North American country.

Taking his Instagram into consideration, Carl apparently is a very well-traveled young man. His followers have observed him cruising through spots like China, the Maldives, Magaluf, and Los Angeles.

Professionally, he is in the Danish army; one of the members of the Royal Guards.

Carl Jacobsen Mikkelsen Comes From The Family Of Actors

He is the grandson of the late actor, Henning Mikkelsen, known for the film, Brutal Incasso (2005). The Danish Royal Guard is also the nephew of Lars Mikkelsen, also an actor known for the series The Kingdom, The Witcher, House Of Cards, Star Wars Rebels, and Borgen, among others. He has additionally appeared in numerous European and Hollywood films.

Carl’s mother, Hanne Jacobsen, born, January 13, 1961, is a Danish choreographer known for her work on Danish series such as Alletiders jul (Everlasting Christmas, 1994), Alletiders nisse (1995), and Pyrus i alletiders eventyr (Pyrus in the adventure of all time, 2000).

Hanne at the beginning used to be on the jury panel of several Danish reality TV series, starting with Harry Måneskin (Harry Moonlight). She also was a mentor at the third season of Stjerne for en aften (Star for an evening).

Other programs where she has worked include ‘Elsker dig for evigt’ på film festival (‘Love you forever’ at film festival), Stjerne for en aften – vinderen (Star of the night – the winner), Det store juleshow (The big Christmas show), and TV akademiet (TV Academy).

The 24-year-old, Jacobsen’s parents, Hanne and Mikkelson have been together since 1987. They married each other on December 2, 2000.

Carl’s father had just moved to Sweden to learn ballet when he met the would-be mother of his children, Hanne Jacobsen.

In an interview, Mads revealed he met his future wife when he was portraying a role of a woman in one of his early plays, La Cage aux Folles.

With the New York Times, the Casino Royale star told:

“I met her when I was dressed up like a woman in La Cage aux Folles. There must be some Freudian stuff happening there. I was a Chinese girl, and I think I was quite good. I have women’s legs.”

Hanne and Mads at the time were both dancers. The Danish choreographer mother of Carl revealed she actually met his father in an audition at Aarhus Theatre.

After some time, they developed a relationship and have been together ever since.

Does Carl Have A Girlfriend?

Although Carl is yet to confirm it in the writings, he does seem to have/had someone special. Back in March 2017, he introduced a random girl by the name Ofelia Klitgaard to his Insta followers through a picture where he can be seen glaring at the young woman with a big grin across his face.

Worth noticing is that the blonde lady also appears to reciprocate Carl’s deem in addition to apparent blush.

Though, the question that lingered after this particular post was what Carl was actually trying to convey with this specific imagery.

Nevertheless, while he may not have clearly stated the dynamics between him and Ofelia, the comments by his followers; all pouring in the classic red heart emoji pretty much suggest the two were not just normal friends much less some strangers.

Ofelia Klitgaard turns out to be the native of Hellerup, Kobenhavn, and presumably is a gymnast or an equestrian.

In July 2018, the Mikkelsen couple gave their only son solid capital to start his adult life.

Carl took over his parents’ apartment at a discounted price. Earlier his sister, Viola had also received similar nature of aid from her celebrity parents.

A while ago, multiple sites claimed Carl and Viola’s father, Mikkelsen was gearing up for a return to the Marvel Cinematic Universe in the sequel of Doctor Strange (2016).

Mads’ character, Kaecilius in the first film went to atomization and vanished into the Dark Dimension.

Several reports along with Indie Wire had been suggesting the mystical villain was returning in the movie’s part 2, Doctor Strange in Multiverse of Madness.

“I’m happy with what I’m doing. I’m happy I’ve been invited into some great franchises, like the Bond, Marvel, and Indiana Jones [franchises]. It’s a luxury, so if that’s what’s coming my way, I’ll take it any day. If they do want me to do something else, I’ll give it a shot!”

Though none of the parties, MCU or Mikkelsen has talked about their collaboration in the open.

Admittingly, Marvel is notorious for hiding half of the cast until the release of the film itself. However, considering Doc Strange 2 centers around the multiverse, the possibility of Mads’ reprising the role of dark-eyed villain isn’t completely out of the window.